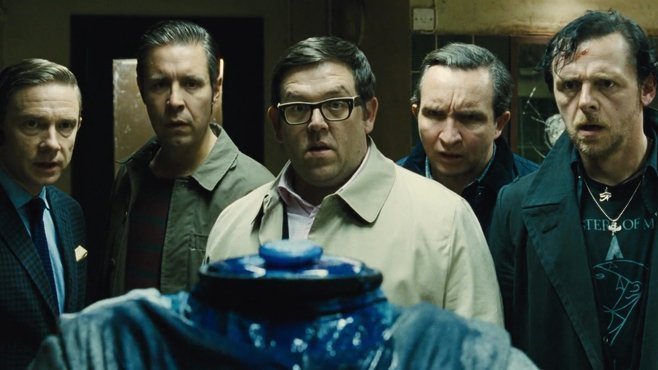 A truly apocalyptic night out...

I found more than one cause for surprise when writing this piece. The first was discovering that The World’s End is five years old, but that abated quickly enough; time does fly, as they say.

The second stayed with me for a bit longer. I’d seen the film, or at least parts of it, before. I remembered the premise; a bunch of middle-aged English chaps, hemmed in by the banality of adult life, revisit the halcyon days of their youth by going on a drinking bender, only to have their fun interrupted by an alien invasion (or something like that). What I did not remember, however, was how underwhelming it was.

It starts off something like an English answer to The Hangover. Gary King (Simon Pegg) skips out of his AA meeting to round up his old school friends (all of whom have embarked upon drab, respectable, unimaginative lives) for a pub crawl in their home town. Said pub crawl unfolds with relative smoothness until Gary starts a row in a gents’ toilets, ultimately decapitating his opponent and discovering that he’s a robot of some sort. Thus, out of nowhere, we are thrust back into the odd realm of the light-hearted apocalypse movie.

Despite its novel concept, it’s all fairly uninspiring stuff. The exposition is somewhat heavy-handed and the jokes are largely unfunny. You would be forgiven for thinking, once the fake blood starts to spatter, that Edgar Wright and co.’s talent for farcical violent comedy is set to save the day. Alas, it doesn’t prove to be enough on this outing.

The outrageous schtick that made Shaun of the Dead and Hot Fuzz  instant winners (which, along with this movie, have come to be known collectively as the ‘Cornetto Trilogy’) just doesn’t do the trick here. Part of the blame must undeniably be lain at the feet of the protagonist. Gary King is the sort of “lovable rogue” we are supposed to grudgingly like, or at least feel a bit sorry for. It is impossible to muster up either sentiment, purely because he’s just too annoying. His ceaseless monologues proclaiming his love of drink and his disdain for the trappings of his old friends’ lifestyles become tiresome almost immediately, and most of his many, many jokes fall flat. This is compounded by the fact that all of his comrades are essentially the same character (with the exception of Nick Frost‘s, who  is slightly less polite).

To be fair, the film does succeed visually in the same way as its aforementioned predecessors. The fight choreography is brilliantly done, and makes for some worthwhile slapstick comedy. It is somewhat difficult to believe that respectable gents in their 40s would be such accomplished pugilists, or that any monster/robot worth its salt would be dismembered quite so easily as the ones on show here. The World’s End is not, however, preoccupied with plausibility.

Pierce Brosnan’s brief contribution as the main characters’ old schoolteacher is also passably amusing, and a few one-liners are laugh-worthy. Other than that, however, there is little about which to be enthusiastic.

I usually avoid looking at review aggregation scores before watching a film, to allow myself a chance to like or loathe it based purely on my own perceptions. The World’s End was no different. I typed its name into Google expecting to see a Rotten Tomatoes score in the 40-50% range that is typical of such ho-hum comedies. Cue my biggest surprise yet.

The World’s End has somehow managed to earn itself a Tomatometer score of 89%. I was shocked. I mean, I’m well aware that comedy is subjective, but 89%? To put it into perspective, many films have claimed Oscars for Best Picture without getting anywhere near such a prestigious score. A Beautiful Mind, for instance, scores 75% on the same scale, while Braveheart scores 76%.

I am not unaware of the criticisms that are levelled at sites like Rotten Tomatoes as viable tools for assessing film quality, and I agree that there is something off-putting about the idea of assigning a percentage score to an experience so beautifully subjective as the watching of a movie. Nevertheless, I found it remarkable that such an overwhelming majority of critics had good things to say about this one.

So, to sum up, you may well be better off ignoring everything I’ve just written about The World’s End, because there’s a very good chance you’ll love it. And, for me, while I didn’t care very much for the movie itself, it served as a pleasant reminder that there’s no such thing as right and wrong when it comes to film.