by Robin Yacoubian
in Spotlight

Of all your favourite comedies to be released in the last fifteen years, you can be fairly certain that at least a few of them involved Judd Apatow. Whether as a writer, producer or director, the man has been involved in everything from Lena Dunham’s Girls to Lonely Island’s Pop Star: Never Stop Stopping. It goes without saying that the nature and direction of comedy in Hollywood would look vastly different without Apatow and his group of key actors knocking film after film out of the park. To celebrate the release of the hilarious and unique The Big Sick in cinemas July 28th, which Apatow produced, we’ve decided to collect together the Top Ten Judd Apatow movies. 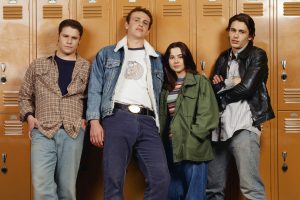 It is still a source of grief for many that this quirky and irreverent cult show was cancelled after just one season. While this means that people will forever wonder what could have been and where the show could have gone, Freaks and Geeks is more revered today than ever. Beyond the superb writing and acting, there’s something truly amazing about watching actors as established as Jason Segel and James Franco in their breakout roles. 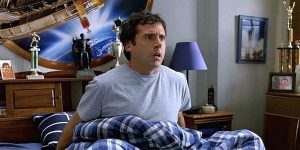 The 40-Year-Old-Virgin succeeds on all fronts, creating an outrageous and cringe inducing yet clever and astute comedy that never lets up its momentum for a second. The film remains one of Apatow’s greatest directorial achievement because it is put together with such care and awareness whilst always feeling loose and improvisational. This is not to mention that it established Steve Carell as the comedy juggernaut that he continues to be today. 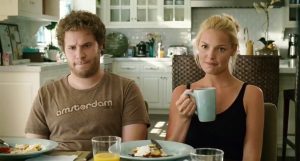 Knocked Up may start on a fairly expected note, introducing a bunch of lazy stoner friends trying to start up their own internet business. While it’s impossible to deny the appeal of Seth Rogen, Jonah Hill, Jason Segel doing their thing, what really separates this film is how originally and authentically it balances that element with a moving exploration of fatherhood and growing up. Apatow shows here that he is a master of controlling mood and tone. 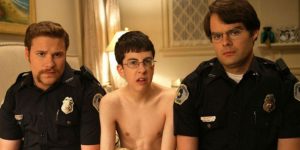 Seth Rogen and Evan Goldberg famously started writing the screenplay for Superbad in high school, and this shows throughout in its original and constantly resonant portrayal of high school outcasts trying to get laid before they go to college. It is easily one of the best written mainstream comedies of the twenty first century and features a brilliant ensemble cast all at the top of their games. While it’s hard to pick standouts, Seth Rogen and Bill Hader are absolutely incredible as the two hapless cops who strike up a friendship with Fogell (AKA McLovin’). 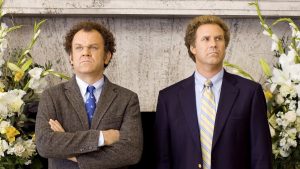 Comedies about a man-child is fairly tried and tested at this point but leave it to an Apatow produced film starring Will Ferrell and John C. Reilly to inject some originality into the formula. Step Brothers follows two aimless middle-aged losers still living at home who are forced against their will to become roommates when their parents marry. It is a consistently fresh and gut wrenchingly funny film stacked full of iconic moments, from their joint job interviews to any scene involving Kathryn Hahn. 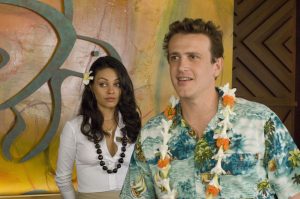 Forgetting Sarah Marshall centres on Jason Segel’s Peter who takes a Hawaiian vacation in order to deal with the recent break-up with his TV star girlfriend, Sarah. The film may initially seem to be filled with the hallmarks of the Apatow brand without the immediate originality of Knocked Up or The 40-Year-Old-Virgin, but it remains exciting throughout thanks to Segel’s extremely witty screenplay that is littered with occasional moments of comedic genius. 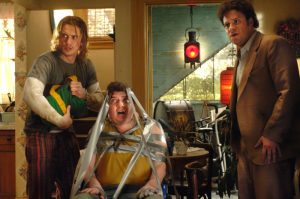 Pineapple Express is easily the peak of the specific brand of action-comedy that Apatow and Rogen made their name with. First off, it has some absolutely perfect casting, from Danny McBride’s deranged but oddly appealing Red to Craig Robinson’s Matheson. Most importantly however is James Franco in a role that showcased his excellent comedic timing and loose acting style. This is not to mention the plethora of increasingly absurd but hilarious scenes throughout, from the fight at Red’s house to the final shootout. 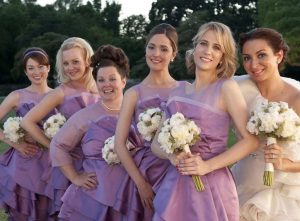 Bridesmaids follows a maid-of-honour, whose rivalry with a bridesmaid threatens their friend’s marriage. It is a chaotic, ridiculously funny and shrewd film that earned Kristen Wiig and Annie Mumolo an Oscar nomination for writing and Melissa McCarthy one for acting. Beyond that, it began a trend of female led R-rated films that have gone from strength and strength in the years since and proved that women in comedy could be just as grossly absurd as men. 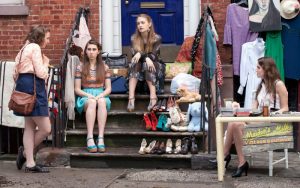 There’s no denying the cultural impact of Girls. In what was immediately deemed the antithesis of Sex and the City’s glamorous take on women in New York, Dunham created a truly unique, often infuriating show packed full of some of the best characters in television. Dunham is now at the forefront of the comedy scene but Apatow helped shape the show’s direction and clearly trusted in Dunham’s vision from the beginning. 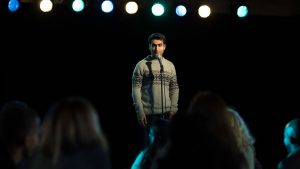 With a great role in HBO’s acclaimed Silicon Valley, Kumail Nanjiani has been on the edge of truly breaking out for a while now. This romantic comedy produced by Apatow and written by him and his wife is what will surely do it though. Apatow can once again be credited with guiding the film and making sure that it strikes the right balance between comedy and more heartfelt emotion. However, The Big Sick truly succeeds because of how genuine and personal the issues it explores are; most significantly negotiating one’s cultural identity in relationships and everyday life.

The Big Sick is released in UK cinemas on 28 July 2017. What would make your Top Ten Judd Apatow movies.