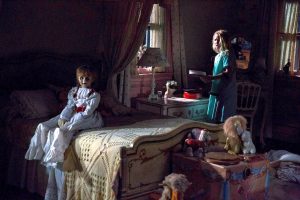 Devilish dolls with a life of their own have been a staple of the horror film since its earliest days: who could forget Lionel Barrymore and his mannequins from hell in the classic chiller The Devil-Doll (1936), or Chucky, the daddy of all evil play pals, in the string of hit movies which started with Child’s Play (1988)? 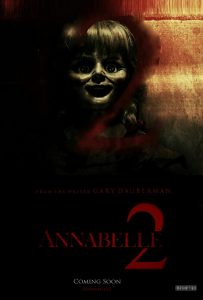 However it took smash-hit shocker The Conjuring (2013) and its series of off-shoot films, to introduce cinema-goers to a new girl in town – namely the loveable Annabelle.  The sinister victorian doll with a wicked persona was showcased in her own vehicle in 2014, and is now set to return in Annabelle: Creation (2017) which, as the title implies, will chart the circumstances surrounding her ‘birth’.  Directed by David F. Sandberg and starring Miranda Otto, Alicia Vela-Bailey and Stephanie Sigman, this new horror – which opens in August – looks set to take The Conjuring franchise to a whole new level.  You’ve been warned.