Despite the fact that he’s been on the fashion scene for more than twenty five years, and is said, by eccentric fashion icon Iris Apfel, to be “a treasure and has to be treated as such”, Dries Van Noten is not one of the first names to spring to the general public’s mind when talking about high end fashion. 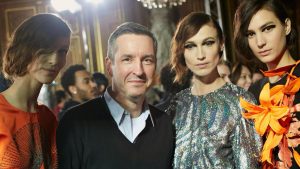 All this is set to change however with the release in July a Reiner Holzemer’s documentary, which follows Van Noten for a year, as he creates a series of collections and fashion shows which have become the must see events of Paris Fashion Week.  Like fashion documentaries such as The September Issue, and the recent one which chronicled Iris Apfel herself, the new film looks set to gain cult status amongst fashionistas, and help demystify the hallowed halls of high fashion for the rest of us mere mortals.