It’ll probably be a while until the next James Bond film comes along – they haven’t even chosen a replacement for Daniel Craig yet.  Until such times as that happens however, we have the Kingsman films which, if the trailer for the new film in the series is anything to go by, could end up giving the 007 franchise a run for their money. 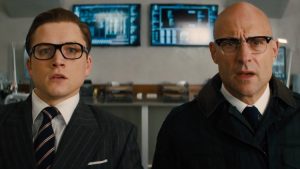 After the success of Kingsman: The Secret Service (2014), it was only a matter of time before secret agent Harry ‘Galahad’ Hart (Colin Firth) and his young protégé Gary ‘Eggsy’ Unwind (Taron Egerton), donned their dapper Savile Row threads, and set off to save the world again.  This time, in Kingsman: The Golden Circle (2017), the two suave agents find themselves joining forces with their American counterparts, in order to defeat a foe who threatens world stability. 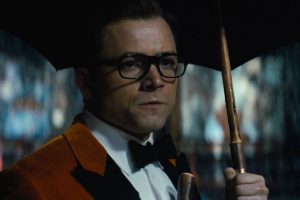 Directed again by Matthew Vaughan – and written, like the first film, by Vaughan and frequent collaborator Jane Goldman (based on characters created by Mark Millar and Dave Gibbons) – this adventure features a host of megawatt co-stars including Channing Tatum, Halle Berry, Julianne Moore, Jeff Bridges, and Elton John!  Roll on the release date of 29th September, we’re already dusting off our bowler hats and umbrellas.