When it comes to showcasing utmost versatility and screen presence, Woody Harrelson is almost unrivaled. For over 25 years, this actor has been in the skin of countless roles and diverse characters, and each time, his impeccable adaptability to them has left the audience in awe and appreciation. From a lover boy to a stiffened bounty hunter, Woody has nailed every avatar he essayed.

Though Woody’s claim-to-fame has mostly been his big screen ventures, it was the 2013 television crime drama by HBO “True Detective” that re-established Harrelson as one of the most versatile film actors who has made a big impression on television. His ability to blend precision and resolve in his roles has fetched him worldwide accolades.
Below are Harrelson’s  5 greatest which prove why he deserves to be considered as one of the most celebrated actors of all time:

When Woody was roped in to play the co-lead in this extremely acclaimed drama series, most were under the impression that his charisma would be outshone by his Oscar winning co-star, Matthew McConaughey. However Woody left all sceptics tongue-tied with his magnificent portrayal of detective Martin Hart in the show. Martin is a prudent investigator who is competitive in his profession as much he is devoted to his family. Apart from the show’s thrills and suspense, it is Woody’s relatable, genuine character that forms a perpetual contrast to that of Matthew’s character. After bagging the lead actor Emmy nomination for this role, Martin Hart can definitely be considered as one of the greatest and most challenging roles that Woody has ever portrayed. The series is all set to give a tough fight to other drama series like Breaking Bad and The Walking Dead in every drama category award this year.

After being on a roll playing romantic characters, Woody tried his hand as a prodigious bowling athlete in the film Kingpin. Roy is a successful player until his life becomes topsy-turvy after an accident. Woody portrays both the vividness and the taxing struggle of the character with absolute brilliance. Even though the film received mixed reviews, Woody’s performance was highly appreciated.

With the role of Carson Wells in the Academy Award winning film No Country for Old Men, Woody’s maturity and astute insight for picking serious roles reaches a new standard altogether. Woody plays the character of Carson, who is a hired bounty hunter who eventually falls into the cobweb of his own arranged ploy. Woody exhibits both the malevolence and underlying integrity of the character with near genius. 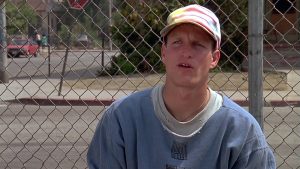 In this classic comedy, Woody plays the role of Bill Hoyle – a hustler who makes his living hustling streetballers using the stereotypes of white players. In this role, Woody proves his proficiency yet again through his brilliant comic timing and punch-line deliveries.

Harrelson’s other latest performance as Haymitch Abernathy, the drunken and dysfunctional trainer of the protagonist, has undoubtedly been the most multihued and testing role of his entire acting career. As Haymitch, an uncharacteristic middle-aged man battling his inner demons, Woody yet again attests his versatility and true worth.