“It’s Not The Years Honey, It’s The Mileage”

The fedora. The bullwhip. There’s really very little I need, or indeed want, to say in an introduction to my reviews of the three Indiana Jones movies that were released between 1981 and 1989. These movies helped inspire a love of cinema in my younger self, and I’m happy to say that the character casts an indelibly large shadow over the entire decade, in terms of box office performance, influence and sheer movie magic. Raiders Of The Lost Ark remains one of my all-time favourite movies, and one sequence in particular may be the best thing to have ever happened onscreen in over a century of cinema. If you’ve seen the film then you’ll know what I mean. If you’ve somehow not seen ANY of the Indiana Jones movies yet then get a hold of them ASAP, get a big tub of popcorn and prepare to rekindle your love of cinema.

The first outing for the character of Indiana Jones not only remains the best of any of his cinematic outings, it remains a high point in modern cinema that’s hard to beat. Everything just came together perfectly for this movie, and every time I rewatch it I thank my lucky stars that they did. This used to be one of my options for favourite movie of all time until I decided to stop hedging my bets and stick with Jaws. Those who have seen it should know why I rate it so highly, while those who have yet to enjoy this particular adventure . . . . . . . . . . . . . . . . . need to get to it NOW!

Harrison Ford plays the hero, a professor of archaeology who also spends his fair share of time getting his hands dirty in quests for historical artifacts. In fact, he is on such a quest when audiences first see him, accompanied by Alfred Molina as he attempts to navigate booby-traps and retrieve a golden idol. This sequence alone has been parodied and homaged so many times that even those who haven’t seen the movie should know how parts of it play out. And, as this sequence comes to an end, we also get to meet Belloq (Paul Freeman), a man in the same trade as Indiana, but without the same ethics. When the main adventure begins it concerns, as per the title, the lost ark. The Ark Of The Covenant, the container that supposedly once held the ten commandments. It turns out that the object has piqued the curiosity of the Nazis – the year is 1936 – and Indiana Jones is asked to find it before they do. He sets off on his travels, meeting up again with an old flame named Marion Ravenwood (Karen Allen), who doesn’t jump for joy at his reappearance, and racing against both Belloq and numerous Nazis, including the sadistic Major Toht (Ronald Lacey). 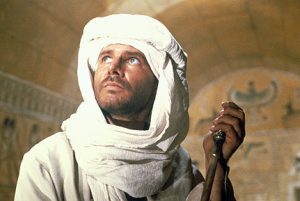 George Lucas deserves a mention, for coming up with the idea, but it’s the script by Lawrence Kasdan and the direction by Steven Spielberg that makes this so brilliant. And then the unforgettable music by John Williams. And the cast. Ford IS Indiana, just as he IS Han Solo (the guy knows how to play gruff heroes as charming rogues, you have to give him that), Allen is a worthy female sparring partner for him, Freeman and Lacey are great baddies, in very different ways, and John Rhys-Davies and Denholm Elliott are a delightful pair of allies for our hero.

With wit, intelligence and a real feeling of blood and sweat seeping through almost every scene, Raiders Of The Lost Ark is a rollicking good time, featuring a number of impressive set-pieces that have rarely been bettered in the past 30+ years (although that hasn’t stopped people trying). If you’re somehow still unsure about giving this movie two hours of your time then just track down a clip of the sequence in which Indiana Jones chases down a number of Nazi trucks and attempts to take over the lead vehicle. It’s one of the best cinematic moments of my life, and I’m sure others feel the same way.

The second cinematic outing for Indiana Jones, actually set a few years before the events of the first movie, starts off in glorious fashion. It’s a big song and dance number that then segues nicely into a deal being made by Dr. Jones and some people who don’t want to pay what he’s asking for. Jones grabs the beautiful singer, Willie Scott (Kate Capshaw), and eventually escapes a perilous situation, but the baddies remain in hot pursuit. And it’s at about this point that Indiana Jones And The Temple Of Doom shows its hand. It creates a fantastic set-piece, and then adds some more to it, and then more, and more, until it all becomes a bit too much. Too much excitement becomes, paradoxically, boring. It’s not as bloated and off the mark as 1941, but you can tell that it’s the same director in the hot seat.

When the main plot starts up it involves sacred stones, an evil cult and stolen children who are forced into slave labour. Indiana Jones is the man that people hope will save the day, Short Round (Jonatahan Ke Quan) is his sidekick, and Willie Scott is one major pain in the backside. Amrish Puri plays the dastardly cult leader, Mola Ram, and the squeamish may not want to watch whenever he is about to deal with a human sacrifice. 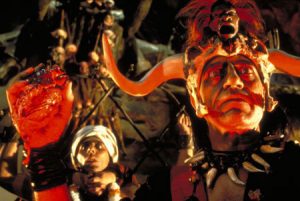 Darker and more uneven than any other Indiana Jones movie (yes, I said ANY other Indiana Jones movie, to date), there’s still a lot to enjoy in Indiana Jones And The Temple Of Doom. The main man himself (played with effortless charm by Harrison Ford, of course) is a great character to spend some time with, and Short Round is a great sidekick. There’s also an extended action sequence in the third act that’s easily up there with the best in the series, and kudos to Spielberg and co. for ensuring that each movie has at least one such highlight.

Capshaw may almost ruin the movie at times, but she has moments in which she does well, and by the time the big finale is unfolding she’s bearable. Almost. It’s not her fault though, to be fair, as the script seems to have been written with little thought for her character besides notes that said: “WILLIE SHRIEKS.” Well, that’s certainly the impression given by the final result.

Veering wildly between moments that are too juvenile and moments that are just a bit too dark, this is a movie that many people seem to struggle to stick with. This allows it to be easily dismissed, before being given another chance some years down the line. Does it deserve another chance? Yes, I think it does. Considering the highlights – a queasy dinner scene, the malevolent villain played by Puri, that brilliant minecart chase – this is still a great slice of entertainment that only seems worse than it is when compared to the other instalments in the series. Oh, it has a number of flaws, with the main ones already mentioned here, but if this wasn’t the movie that followed Raiders Of The Lost Ark then I think it may have received a slightly better reception. Maybe.

Indiana Jones And The Last Crusade (1989) 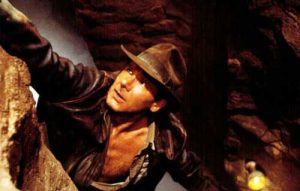 As much as I enjoy Indiana Jones And The Kingdom Of The Crystal Skull, this is where the Indiana Jones saga should have ended. This is the perfect end to what would have always been (and, in the eyes of many, still IS) a near-perfect trilogy. 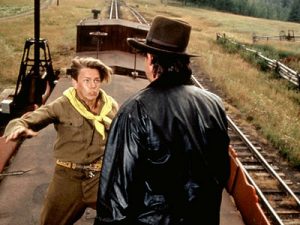 It all starts . . . . . . . . . . . at the beginning, as a very young Indiana Jones (played by River Phoenix) goes on what we can assume is his first adventure. It ends in failure, but that failure is only temporary, as we realise when we catch up once more with the adult Dr. Jones. As things calm down slightly, viewers learn all about the main plot device for this outing: The Holy Grail. Oh yes, Dr. Jones knows all about the holy grail, because his father spent most of his life obsessing over the damn thing. As he travels on a quest that may see him find the resting place of the legendary chalice, Indiana Jones ends up reuniting with his father (Sean Connery), a situation that brings to the fore some long-held resentments. Those resentments, however, don’t get in the way of the action, as father and son set out to find The Holy Grail while avoiding a bunch of Nazis who are also seeking the prized relic.

From the fun opener, that benefits from a performance from River Phoenix completely nailing the mannerisms of the character, to the reveal of the main plot, to the introduction of the older Mr. Jones, to every subsequent action beat, this is superior, slick entertainment that almost rivals Raiders Of The Lost Ark in the sheer satisfying blockbuster department.

Spielberg more than makes up for the disappointing previous entry in the series, helped along by a lively and witty script by Jeffrey Boam, and this even seems reflected in the performances from the cast, who exude a real sense of fun and camaraderie.

Ford and Connery are the beating heart of the film, and they’re such a great double-act that it’s almost a shame when the end credits roll. Their story is told, however, and that makes everything okay. Denholm Elliott and John Rhys-Davies may only crop up onscreen to make fans smile, but that allows for extra screentime for people like Alison Doody (playing a woman who gets both of the Jones men a tad flustered) and Julian Glover (seeker of the Grail).

I could go on and on about Indiana Jones And The Last Crusade, but I’d just be repeating myself, both in terms of this instalment and the entire franchise. Someone once said, and apologies for forgetting who exactly it was, that examining comedy and delving deeper and deeper ends up just ruining it. You can’t analyze it without spoiling the specimen. Sometimes that feels the same way for movies. I don’t want to write more on the Indiana Jones movies because I worry that further analysis could ruin the experience.

So just line up the franchise, have a big bowl of popcorn by your side, and get ready to have a LOT of filmic fun.

NB – I am one of the few people who really likes Indiana Jones & The Kingdom Of The Crystal Skull (2008). The only reason it isn’t here is, of course, because it wasn’t released in the ’80s.