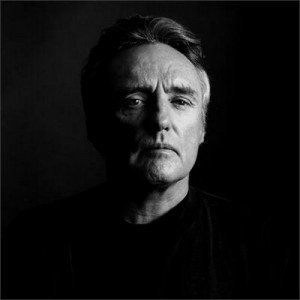 The late great Dennis Hopper (1936-2010), best know for his career as an actor in film and television, was also a writer and director. I started this list thinking I had a well-rounded knowledge of Hopper’s film career, but the deeper I dug the more I realized that with over 150 acting credits to his name, I had only scratched the surface of this legend’s great performances. Hopper was quoted as saying he wasn’t offered many good roles, and after watching many of his films, I think he was right. But this never stopped Dennis, because he could do a lot with a little, and often did. Some roles were great by design, like Frank Booth or Billy, others were great only because of who inhabited them, and if Dennis inhabited a character, it became great. Think of this list as a starting point (presented in chronological order) of a long journey that will take you through many ups and downs with one of America’s greatest actors. 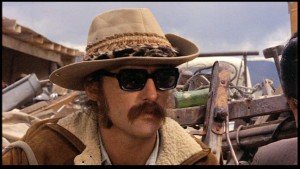 Dennis Hopper’s role as actor, writer, and director in Easy Rider was a turning point for American film. Frank Booth may be Hopper’s most celebrated performance, but his role as Billy was his most important. Billy’s search for freedom leads him down a path that he could not have foretold, and, like most of Hopper’s great roles, Billy is unstable and unsure of what he’s after or how to get it. The cultural impact of Easy Rider can be paralleled with Hopper’s character. Much like Billy, Hollywood and America we going through uncertain changes in the late 1960s, and just like in the film, the outcome for Hollywood and America was not what we expected. 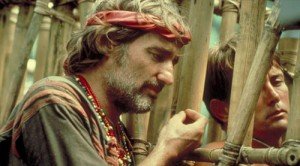 It’s possible to forget for a moment that Dennis Hopper is in Apocalypse Now, but it’s impossible to forget his character. Many times I’ve mentioned Hopper’s inclusion in the film, only to be greeted with blank stares, but when I say, “You know, the crazy photojournalist guy”, their eyes light up, usually followed with a comment on the weirdness of the character. Not only is the character weird, but for my money, it’s the best character in the film, and that’s saying a lot because Apocalypse Now is full of great performances, but when I see Dennis in the distance, running around on the shore and shouting at the approaching boat, I feel the grin on my face grow as I sit up in my seat, ready for one of my favorite performances captured on film.

Several years after Lefty’s relatives were murdered by the Sawyer family, Lieutenant Enright returns seeking vengeance. This role, as vigilante, gives Dennis Hopper the opportunity to play both sides of the coin, concerned hero seeking justice and cold blooded killer seeking revenge. There’s something about Hopper in a cowboy hat, armed with three chainsaws while screaming and ranting, that seems so right.

As Feck, Hopper is subdued compared to some of his better known roles, but Feck is as unstable, if not more so, than any of Hopper’s other characters. As a one-legged, shut-in, drug dealer, whose companion is an inflatable doll named Elly, which he talks to, Feck is a unique character to say the least. In this role, Hopper makes it clear he doesn’t need to be loud to be a commanding presence on screen, nor does he require a lot of screen time to be effective. 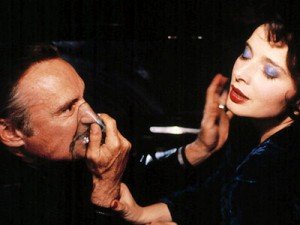 There is something about Frank Booth that both draws in and repulses the viewer. Is it because Frank’s a full time onscreen antagonist, or perhaps his usage of the f-word (which almost becomes a character of it’s own)? More than that, it’s his hidden weaknesses that win us over. When it’s ‘dark’ we see the power of Frank, but in the ‘light’ of Ben, and his Candy Colored Clown, we see a hidden place in Frank, which is reflected in the opening of the film, where we see the grassy lawn, but upon a closer look we see there is more to the average lawn than we thought. Dennis Hopper is spectacular as Frank Booth, legend has it that Hopper told director David Lynch he needed to play Frank, because he was Frank. Lynch took a chance putting Hopper in this role (as his reputation in Hollywood had caused doubts about his stability), but it was one of the most rewarding chances Lynch has ever taken. Every top ten list of Dennis Hopper’s career has Blue Velvet on it, usually at the top. And honestly, can you think of anyone else as Frank Booth? Dennis was right, he was, and always will be, Frank. 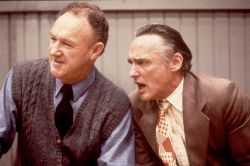 First off, I don’t like basketball, but I have a soft spot for Hoosiers and Dennis Hopper’s role as Shooter, the aged high school basketball star who ended up an alcoholic living in the woods who shoots first and yells, “Identify yourself!” later. As a Hoosier who grew up within 15 miles of one of the towns used as Hickory, the film brings back memories, some of which include people like Shooter. A forgettable character in the hands of a lesser actor,  Hopper does a great job making sure Shooter stands out, and makes him my favorite character. As simple as the story is, I was rooting for Shooter to overcome his alcoholism and was genuinely excited during his scenes as assistant coach. His enthusiasm, while talking to a uninterested nurse about his coaching and an upcoming game, brings the character full circle, and we get our payoff.

Dennis Hopper’s portrayal of the prodigal father, who helps his prodigal son at a great cost to himself, contains a memorable, and often discussed, scene in True Romance. A retired cop, who is now a security guard, Clifford is a friendly guy with his dog by his side. It’s not often the Hopper appeared as a friendly father, who wasn’t suffering from substance abuse, but here he’s clean, sober, and enjoying the simple life. Later, when things turn sour for Clifford, we’re greeted by a dream come true, Dennis Hopper and Christopher Walken together onscreen. Quentin Tarantino’s top-notch dialogue is delivered perfectly by these veteran actors. And while we wait for Clifford to light the Chesterfield cigarette he refused a few moments prior, we know we’re about the hear the most memorable lines in the film. 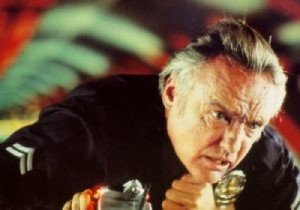 I would never recommend this film on it’s own merits, but Dennis Hopper pulls a rabbit out of the hat, once again, and takes an easily forgettable role as a bomb-happy villain and turns it into a noteworthy performance. With the exception of a few scenes, Hopper’s screen time consists of talking on a phone. This may not sound interesting, but you know Dennis isn’t going to let something like that slow him down, and despite this visually one dimensional setback, Hopper makes the most of it, and although we’re cheering for the heroes (we are, aren’t we?), it’s more fun watching Hopper, as Howard Payne, lay down his own law and stay one step ahead of his would-be captors. 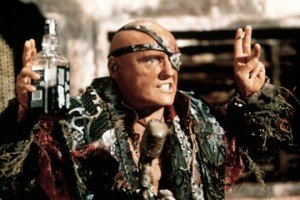 Comedy and elaborate costumes are not common in Dennis Hopper’s work, but Deacon has a little of both, and Hopper does well with it and his various props. Waterworld may not be great on a whole, but it’s not bad, and Hopper’s take on Deacon makes it even more enjoyable. Although Dennis is at his best when playing the villain, here he also has to juggle a little comedy, and wear an eye patch. Deacon’s dialogue with Enola (Tina Majorino) provides some of the best comedic moments in the film. 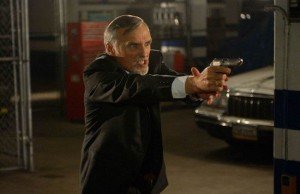 “In a world where the dead are returning to life, the word ‘trouble’ loses much of its meaning.” One of the great lines uttered by Dennis Hopper, as Kaufman, in Romero’s fourth film in his “Dead” series. The self-proclaimed head of upper class life in what is left of an otherwise desolate wasteland of the undead, Kaufman sits in his ivory tower, barking orders to his underlings, while assuring them all is well, in the straight-faced, unsympathetic way Hopper does so well. As an avid fan of zombie films, a chance to see Dennis Hopper in one is a dream come true, and although we never see him in zombie makeup, we get a healthy dose of what we love to see him do best, be an unrepentant asshole.