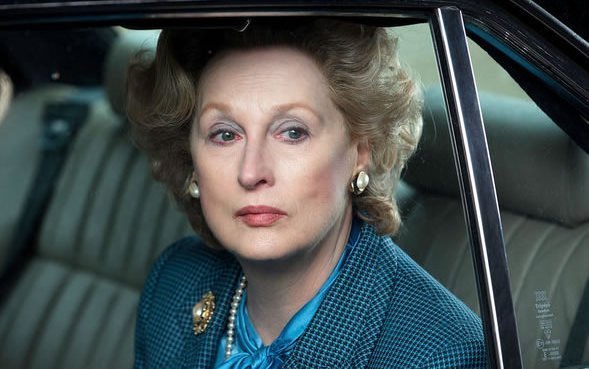 Meryl Streep is widely considered amongst those who know, to be the world’s greatest living actress.  Never one to shy from controversy Streep jumps at roles which would paralyze lesser thespians, whether they be in the concentration camps of WWII or the equally deadly world of the New York fashion magazine.

This month has seen the actress renowned for her ability to conquer any accent break yet more boundaries.  As well as taking on the role of one of the world’s most iconic female politicians Margaret Thatcher (a creepily uncanny portrayal which has added to Streep’s already long list of Oscar accolades with a Best Actress nomination in this year’s awards), she has become, at 62, one of the oldest women ever to grace the cover of that bible to the cult of youth, American Vogue.

We at Flickfeast Central office have drawn up a shortlist of the top ten candidates for her most memorable performance.  As with Mrs ‘T’ herself the results may not be to everyone’s taste and, like Streep, have proven anything but ‘politically correct’! 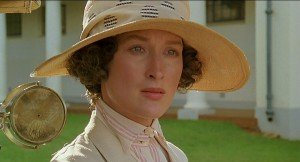 How could you go wrong with the pairing of Streep as Karen, a rich Danish baroness who owns a plantation in early 20th century colonial Kenya, and Robert Redford as her bit of rough in the form of Denys a big game hunter (out to snare more than lions and tigers).  Based on a true story by Danish author Karen Blixen, this Sydney Pollack directed romance was a smash hit with audiences who fell in love with it’s depiction of the lush African bush and it’s equally lush love affair between Streep and Redford. 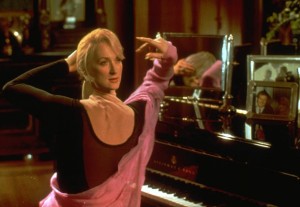 People write Streep off as a serious actress at their peril, as she has frequently shown a deft touch for comedy over a long and varied career.  This ability to send herself up has endeared her to audiences and industry professionals alike, and reached its zenith with this comedy horror.  Streep proved more than capable of standing her own against comic legend Goldie Hawn, with Bruce Willis as the poor schmuck stuck between the two feuding (and aging) beauties.  With Isabella Rossellini added to the mix as a new age ‘witch‘ who provides an opportunity for the arch rivals to turn back the clock, the scene was set for a suitably grotesque pastiche of Hollywood’s obsession with youth, brought to life by special effects genius Robert Zemeckis. 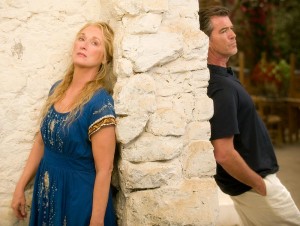 Mama mia there she went again, as Streep notched up yet another hit (and displayed a surprisingly good voice into the bargain), in the big screen adaptation of the smash musical based on the songs of 70’s Swedish pop sensation ABBA.  As kitsch as the music itself, the film brought together a host of stars (including Pierce Brosnan, Colin Firth, Julie Walters and the genius that is Christine Baranski) amongst the to-die-for surroundings of the Greek Islands in a story of mixed-up relationships and equally mixed-up love affairs.  That everything and everyone paled (as usual) in the presence of Streep is taken as read, but that’s the price even superstars have to pay to be in a film with her. 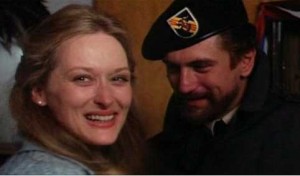 As bleak and brutal as the war around which its premise revolves, this Academy Award winning film was a courageous step for Streep to take on so early in her career.  Though her character Linda (girlfriend to Nick played by Christopher Walken, one of three friends whose lives in a Pittsburgh steel town and later on the killing fields of Vietnam form the main core of the story), was not central to the film, Streep stood out showing the promise of a talent which was to make her one of the world’s most accomplished actresses. 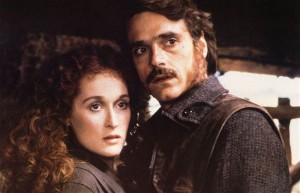 A haunting tale of an unrequited 19th century love affair between a biologist called Charles (Jeremy Irons) who, despite already being engaged, embarks on relationship with an outcast called Sarah (Streep).  Told as a ‘double story’ with Mike and Anna, the couple who play Charles and Sarah, conducting their own affair which plays out in tandem with that being shot as a film, is sumptuously captured by director Karel Reisz, with a screenplay by the legendary British playwright Harold Pinter based on the novel by John Fowles.  The scene where Sarah stands ensconced in a billowing black cloak on a storm swept breakwater (shot on The Cobb at Lyme Regis in Dorset) has gone down as one of the most iconic images in the history of cinema, as well as of Streep herself – a simply stunning and unforgettable piece of film. 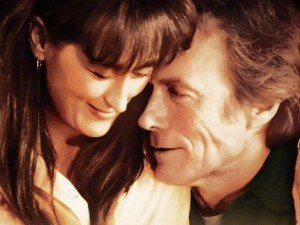 If there is one thing Streep does better than anything else it’s romantic drama, and you can’t get more romantic or dramatic (in the form of the stunning scenery) than this weepy directed by and co-starring Clint Eastwood as photographer Robert Kincaid, who wanders inadvertently through the life of housewife Francesca Johnson.  Like the dusty road which cuts across the bucolic countryside of Madison County and leads Robert past Francesca’s door, this film meanders through a land which by the end you are loathe to leave.  The stunning trailer is unique for a star vehicle like this in that Streep and Eastwood only feature for three seconds of the one minute twenty seven second running time, letting the mesmerizing setting speak for itself. 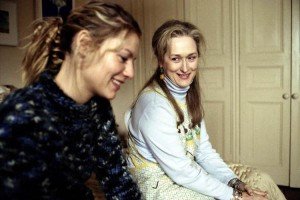 Stephen Daldry received a third Best Director Oscar nomination for The Hours, which was only his third film (the first person to ever achieve this feat).  The film is also remarkable for the fact that, though the lives of characters Virginia Woolfe (a brilliant performance by an almost unrecognizable Nicole Kidman), Laura Brown (Julianne Moore) and Clarissa Vaughan (Streep) are intricately intertwined, the actresses themselves never actually met during filming.  Based on the poignant novel by Michael Cunningham, the film follows three women from three different time periods and the slow disintegration of their lives.  Streep’s exquisite depiction of the present day Clarissa, pushed to the edge as she dwells on what she sees as life’s lost opportunities, is nothing short of heartbreaking. 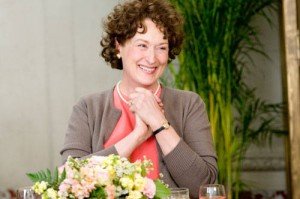 Another intertwiner, and another hit, as Streep took on (and became) legendary American chef Julia Child.  Child’s cookery books changed many people’s approach to cooking as well as their lives – as in the case of blogger Julie Powell, whose memoir based on her life enhancing experience of cooking every recipe in Julia’s first book during one year made her an international star, and formed the basis for the film.  Streep’s off the wall humor and legendary ability to capture any accent, came together in this story of one of the first TV chefs (eat your heart out Fanny Craddock).  Co-starring Stanley Tucci as Julia’s husband Paul and Amy Adams as Julie, it is injected with just the right hint of comedic pathos by Streep under the direction of rom-com supremo Nora Ethron, and was enough to earn her her sixteenth Oscar nomination. 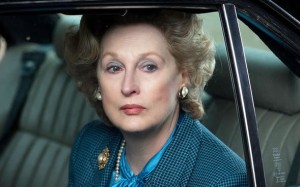 Though Baroness Thatcher is still a divisive figure for many, with some questioning the insensitivity of making the film while she is still alive, there is no denying the uncanny likeness captured by Streep’s portrayal of the Iron Lady.  Viewing the film however, which focuses on the woman as much as her politics, you are left with a feeling of sympathy for a now frail and aged lady who, whether for good or bad, left an undeniable mark on the history of Britain and the world.  Though unlikely to have much effect on Thatcher herself cosseted safely as she is within the leafy environs of London’s Eaton Square, the film can only serve to strengthen Streep’s position in the highest echelons of Tinsel Town. 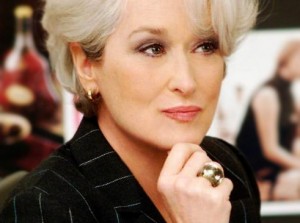 Every actress, even those with as many iconic roles on their resume as Streep, has one defining moment in their career.  Which means there can only be one choice for the top spot – Miranda Priestly!  There is really very little to say about what is the pinnacle of perfection both in filmmaking as a whole and in Streep’s career specifically.  Comedy, drama, horror, and war (anyone who has ever been to a fashion show will tell you it’s as bad as any frontline) are all there, and Streep’s sneer of, “this stuuufff” as she derides new assistant Andy Sachs’ (Anne Hathaway) lack of fashion-sense would be enough to instill terror into any aspiring fashionista.  Though widely denied everyone knows that author Lauren Weisberger based her 2003 bestseller on her experiences of working at American Vogue, and that Priestly was a thinly veiled imitation of its legendary editor Anna Wintour (or ‘Nuclear Wintour’ as she’s nicknamed in the fashion world).  Streep captured to a tee Wintour’s icy demeanor and feared reputation for acidic putdowns and dismissals which were confirmed when Wintour featured in the real-life documentary The September Issue (2009).  Still clearly Wintour has borne no grudge having put Streep on the current cover of the magazine.

Honorary Mentions
Each of Streep’s seventeen film performances for which she has been honored with nominations by the American Academy of Motion Pictures Arts and Sciences, including her two wins for, Best Supporting Actress in Kramer vs Kramer (1979) and Best Actress for Sophie’s Choice (1982).