by Jae Prowse
in Top Ten

We live in an era of remakes, reboots and re-imaginings. Just last month the trailer for a remake (of sorts) for Suspiria surfaced, and while initial fears were allayed, with Luca Guadagnino’s ‘reimagining’ seemingly setting itself apart from the original, it remains to be seen how it stands up alongside Dario Argento‘s visually stunning fever dream.

Call it cynical, but Hollywood knows when it’s on to a good thing, and remakes are a tried and tested way of ensuring a certain level of box office success by exploiting fans of the original and tacking the calculated risk the uninitiated (but curious) come along for the ride. We’re going to be focusing on the good in this article, with a list of terrible remakes to follow, so here’s 10 that worked out rather well. Warning, contains spoilers….

Invasion of the Body Snatchers (1978) 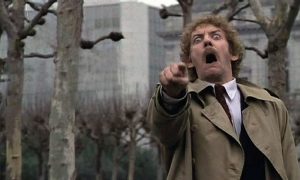 If movies with deep-seated paranoia as a major theme is your thing, then you could do far worse than Invasion of the Body Snatchers. Another movie based on a work of fiction, this time Jack Finney’s 1954 novel The Body Snatchers, the original starred Kevin McCarthy as a Dr. Miles Bennell, who recounts the story of an alien invasion via the duplication of human bodies. Set amidst the era of McCarthyism and the supposed Communist threat of Russia, Invasion of the Body Snatchers was, as the best horror movies so often are, a fascinating commentary on and reflection of the times. The same can be said of the remake, starring Donald Sutherland, and a young Jeff Goldblum. Set in the post-Watergate era, Invasion… centres its themes on paranoia, governmental surveillance, and alien invasion turning the free world on its head. It wouldn’t be hyperbolic to add that there are worrying parallels with the current US administration’s fear of invasion of an entirely different kind. 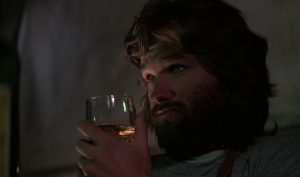 It’s no secret that John Carpenter is a huge fan of Howard Hawks. It may not be immediately obvious in his work, certainly stylistically, but Carpenter has often waxed-lyrical on his passion for the late director. Fairly early in his career, Carpenter – having enjoyed recent success with The Fog, Escape from New York and a certain holiday-themed slasher movie – went all in on a remake of Hawks’ The Thing from Another World. To be fair, the result is closer to the source novella, Who Goes There? by John W. Campbell Jr., than Hawks’ version, albeit with a number of amendments, including pairing down the 37 characters featured in the story to a more manageable 12. Critically, though, The Thing was an absolute bomb –  possibly due to the almost simultaneous release of the more accessible E.T. the Extraterrestrial – and cited as “the quintessential moron movie of the 80s.” Fortunately, critical reappraisal (following a steady growth in popularity via home video) turned the tide and The Thing is now quite rightly regarded as a masterpiece. 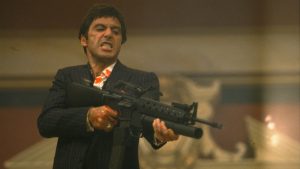 The second Howard Hawks remake to feature in this list, Scarface charts the rise of Cuban refugee Tony Montana to criminal kingpin by way of extreme violence and the prodigious trafficking (and imbibing) of cocaine. Al Pacino’s grandstand performance is a world away from Paul Muni’s take on the character, albeit with Muni’s version closer to another Al (Capone). Written by Oliver Stone and directed by Brian De Palma, Scarface also featured a young Michelle Pfeiffer as Montana’s drug-addled wife, Elvira. Allegedly, De Palma initially refused to audition Pfeiffer after watching her performance in Grease 2, but eventually, and thankfully, relented. Bizarrely, De Palma was also nominated for a Golden Raspberry for Worst Director following the release of Scarface. 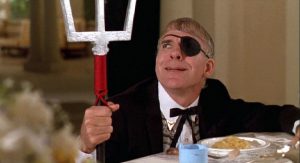 The remake of 1964’s Bedtime Stories was originally intended as a vehicle for Mick Jagger and David Bowie (let that sink in for a moment). As it turned out, Steve Martin and Sir Michael Caine – back then a more humble Michael Caine – took over the roles of Marlon Brando and David Niven to cheat an heiress out, a strangely meagre, even for 1988 – $50,000. The original reveals ‘heiress’ Shirley Jones as nothing more than a lucky contest winner, whereas, fast-forward to the eighties, the renamed Janet Colgate, played to perfection by Glenne Headly, cons the conmen with aplomb.  All directed, of course, by Yoda. 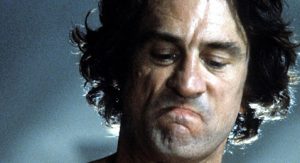 This remake of the 1962 hit sees Nick Nolte take on the role of lawyer Sam Bowden, originally played by Gregory Peck, while Robert De Niro returns a typically tour de force performance as the despicably violent Max Cady – Robert Mitchum played Cady in the original – who terrorises the Bowden family (Jessica Lang as Sam’s wife Leigh and Juliette Lewis their daughter, Danielle). While both films exert different strengths, it’s fair to say that watching Scorsese’s take on an essentially mainstream film is a fantastic watch; almost as if his mastery of film was such that he could make a modern classic just by announcing his intention to direct. Scorsese even managed to secure the return of original stars Peck, Mitchum and Martin Balsam in cameo roles. Cape Fear was nominated for two Academy Awards, Best Actor for Robert De Niro and Best Supporting Actress for Juliette Lewis. Incredibly, Robert De Niro has only received one further Oscar nomination since Cape Fear. Although, considering the dubious quality of some of his work in the intervening years maybe it’s not that much of a surprise.

It’d be churlish to suggest that Francis Ford Coppola’s films that followed matched this, his last great directorial effort. And, despite one or two dodgy performances (you know the ones!) Dracula ranks as a brilliant cinematic achievement. In many ways the polar opposite to Tod Browning’s rather turgid 1931 original; even besting Terence Fisher’s 1958 Hammer productions reimagining through sheer force of will. There will be plenty, of course, who view Bela Lugosi and/or Christopher Lee’s incarnations of the undead Count as high-water marks and neither should be discounted. However, the sumptuous cinematography, utilisation of period cinema techniques, and Gary Oldman’s performance as Dracooolaaaa, in a film dripping with blood and sex should not be disCOUNTed. Sorry. 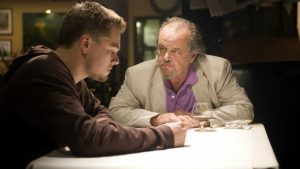 The second Scorsese film to make the list. The director’s Boston-set remake of the 2002 Hong Kong actioner, Infernal Affairs, is proof positive of the potential brilliance of the remake. Of course it helps if a master of cinema is prepared to direct, but how can four Oscar nods, including Best Picture and Best Director, be wrong? Whether it ranks alongside Scorsese’s classics is up for debate, but Infernal Affairs co-director, Andrew Lau, did offer his own appraisal: “Of course I think the version I made is better, but the Hollywood version is pretty good too.” High praise, indeed! 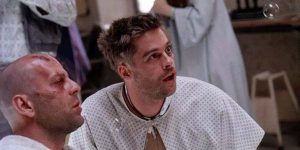 While not a direct remake, 12 Monkeys did take both inspiration and a number of concepts from Chris Marker’s 1962 science fiction short, La Jetée. Most vividly ‘borrowed’ is the denouement in which a childhood memory of witnessing the death of a man at an airport is revealed to be the protagonist seeing his own demise. That may sounds utterly confusing if you’ve not seen the film, and the spoilerific previous sentence won’t have helped much, but watch it anyway – it’ll all make sense in the end. Probably. 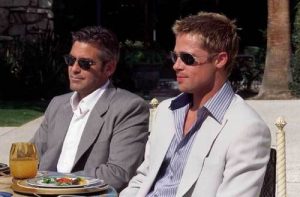 In 1960, Peter Lawford, Frank Sinatra, Dean Martin, Sammy Davis, Jr., and Joey Bishop took part in a fairly pedestrian heist film set in and around Las Vegas. Unsurprisingly, it didn’t really stretch any of the Rat Pack, nor did it linger long in the memory, despite the effortless cool of its stars. Fast forward 41 years and director Steven Soderbergh decided the time was right for a remake. Hiring a number of A-list stars, including George Clooney, Brad Pitt, Julia Roberts and Matt Damon would probably have assured box office success, but armed with Ted Griffin’s screenplay, plus ample star chemistry, Ocean’s Eleven certainly equalled more than the sum of its parts. 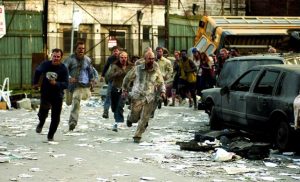 Comparing and contrasting the opening of George A. Romero’s Dawn of the Dead with Zack Snyder’s is a bit like comparing the Mona Lisa with your son or daughter’s art homework; you like both but only one is really a masterpiece (just don’t tell Da Vinci). There’s no getting away from the fact that Romero‘s came first and therefore had already covered off the whole ‘consumerism makes zombies of us’ all debate. Nonetheless, as remakes go, Snyder’s version is excellent and did something nobody was expecting, it allowed the zombies to run. Fast. Now, this wasn’t a complete revelation as Danny Boyle’s 28 Days Later had already attempted to stretch the zombies’ legs, so to speak. However, Boyle’s versions were under the spell of a rage-inducing virus as opposed to being classic zombies of yore. By the time Snyder’s film was released in 2004, all bets were off. The breathless opening sequence saw to that.

Do you think we’ve missed any off of the best remakes list? Feel free to make some suggestions in the comment box below.