Heist movies are some of the most exciting and unpredictable movies ever made. Paradoxically, they’re also the most formulaic. A typical heist movie has a rigid three-act structure: a group of criminals gets together and plans a heist; then the heist is carried out, with varying degrees of success and perfection; and finally the crew members turn against each other, some die, some are caught, and generally nobody lives happily ever after with the stolen money. This structure, although rigid, allows a lot of improvisation and twists. Some movies occur after the heist; some are told in a non-linear way. Some are serious, others more light hearted. Some great parodies have also helped subvert these tropes with wit and originality. With this list I wish to list the finest representatives of this amazing genre, from its past to our modern days. 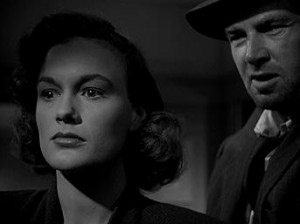 It all starts here. Just about every heist movie has imitated it or made a conscious effort to distance itself from its influence. It got the structure fixed: a criminal mastermind assembles a group of partners; they plan and carry out the heist; unforeseen circumstances get them chased by the law and at odds with other criminals. Almost every trope is here: the guy who dreams of one last big job; the heist that goes wrong; the double-crossing; the use of city as a character; the atmosphere of fatalism. Nowadays the heist sequence seems primitive in comparison with the exuberant plans of Ocean’s Eleven, for instance.  But John Huston laid down all the groundwork for future developments and the movie is still a fun, exciting experience sixty years later. 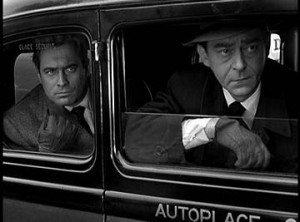 Jules Dassin picked up the formula and gave this French movie a complexity and darkness sadly missing from Hollywood’s movies of the time. A serious exploration of loyalty between criminals, it remains remarkable thanks to its legendary heist sequence, which lasts 30 minutes without words. Dassin’s use of visuals to show the action is unmatched. And although the heist is the film’s apex, the repercussions are also spectacular, as the team is torn apart by incompetence and treachery and the movie ends in a suspenseful race against time to rescue the kidnapped child of one of the crew members. Rififi is possibly the greatest heist film ever made. 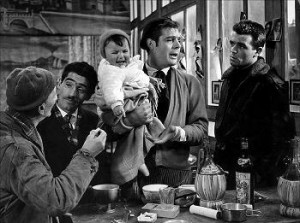 Once the genre reaches its peak with Rififi, what’s left to do but to make fun of it? This Italian comedy is possibly the best parody of the genre committed to celluloid. A veteran burglar behind bars accidently blurts out the plans of a major heist, attracting the interest of a bunch of inexperienced criminals and unemployed family men. As much a heist movie as an analysis of post-war Italian society, this dark comedy about poverty shows everything imaginable going wrong during the heist, and the ending gives a humorous new twist to the saying that crime doesn’t pay. 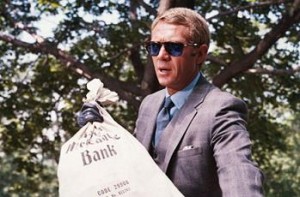 Crime as a gentleman’s idea of entertainment. The heist as the perfect crime to prove one’s intelligence. That’s the purpose of the rich businessman Thomas Crown when he hires five men to rob a bank. This movie deserves a lot of credit for the originality of the scheme: the five crew members, hired individually and privy only to one part of the plan, meet only at the day of the robbery. Once they carry it out they disband, and since they don’t know each other the police only finds dead-ends if one is captured. In real life this would have been a disaster. With movie magic it’s one of the most exhilarating heists in cinema history. The movie tweaks the structure a bit, showing the heist at the beginning. Most of the movie is then devoted to a sexy cat-and-mouse game between the leads, Steve McQueen and Faye Dunaway. 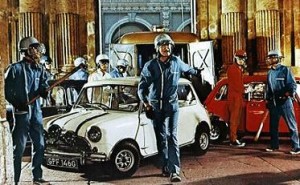 Another classy parody of the genre, fondly remembered nowadays because of its cool dialogues and because of Michael Caine’s slick performance as the upbeat, resourceful Charlie Croker. The plot is as insane as it is hilarious. The crew goes to Italy, breaks down Turin’s traffic system, immerses the city in road chaos, steals a shipment of gold, and then drives away in Minis. Realism is definitely not a concern here. Some heist movies can be slow burners but The Italian Job found a way of bringing speed and movement to it. 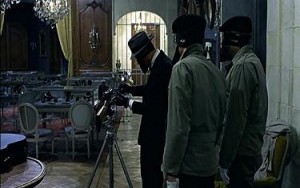 In competition with Rififi for the best heist movie in history, Melville’s masterpiece is a serious and slow-paced meditation on crime, beautifully shot with Melville’s typical emotional detachment and visual symmetry. Melville never managed to get from under Dassin’s shadow and the heist scene here is also a megalomaniac, ambitious 30-minute sequence of silent, meticulous detail. The cast, with Alain Delon, Gian Maria Volontè and Yves Montand, is brilliant, with Montand playing one of his finest roles as a disgraced alcoholic ex-cop who puts his talent as a marksman in the service of crime. 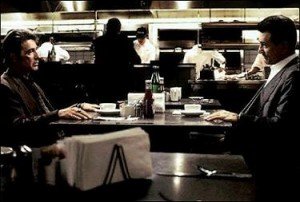 Michael Mann brings much-needed humanity to a genre that can sometimes forget the human element in the story. The criminals have private lives and family. They don’t just exist for the purpose of committing crimes but lead intimate lives with personal problems. The law is also given a human face, although Al Pacino still plays the typical burned out detective consumed by his work who neglects his family. The two leads, Pacino and Robert DeNiro, are perfect as men on opposite sides. Many of the tropes are here; there’s little innovation. But great acting and a sharp screenplay help Heat transcend its type. 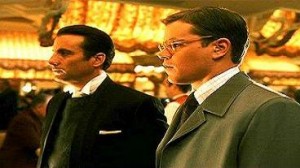 This movie has a very laidback attitude that reminds us of the light-hearted tone of The Italian Job. Danny Ocean recruits a large crew for a spectacular heist on a Vegas Casino. Half heist, half con job, the movie isn’t very honest if we consider that a real heist movie should show the plan taking place before the viewers’ eyes. We, like the victim, are conned for most of movie, and only at the end, after a clever twist, do we see the deception. But Ocean’s Eleven is so joyful Soderbergh is forgiven. Never fatalistic, there’s something righteous about a bunch of likeable conmen relieving a bigger criminal of all his money. They keep the money and we envy them for that. 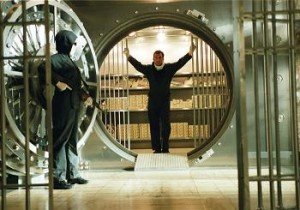 If nothing is stolen, did a robbery take place? That’s the question that baffles the detectives at the end of this movie. A team of masked men take a bank hostage and after many twists they disappear, leaving all the money and safes supposedly untouched. How did they do it? What was it all about? Like Ocean’s Eleven, this movie cheats a bit because we don’t see the robbery actually taking place. The twist, however, is so awesome Inside Man deserves praise for its invention and intelligence. 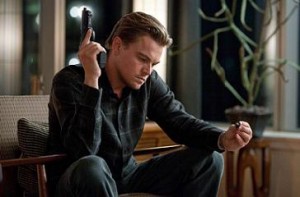 An almost perfect blend of crime drama and science fiction, Inception takes us to a world where entering dreams and stealing ideas is possible. That’s Cobb’s profession, wonderfully played by Leonardo DiCaprio. But then he’s hired to do the opposite: implant an idea in someone’s mind. Even with this inversion, the movie follows many of the tropes of the genre. Cobb, assured by a powerful businessman that his rap sheet will be erased, sees this as the last job that will reunite him with his children. Putting a team of specialists together, they plan a complicated scheme of dreams-within-dreams to fool the target and successfully implant the idea. Although the movie takes a turn into metaphysical questions, the actors’ chemistry keeps this movie exciting until the end.

Like the reviews? Want the films? Buy them below…