Animated films are as popular as ever, be it Disney/Pixar, Studio Ghibli or even Sylvain Chomet, today’s cinema-going audiences love the animated film. When considering who are the most influential animated characters it is easy to list some great characters from the plethora of Disney feature films and to consider these the precursors to Woody, Buzz et al. But long before Snow White, Dumbo and Bambi were created other animators were making and breaking the rules and setting the standards for animated films. There are also animators who rebelled against the Disney aesthetic and in my opinion produced characters that were far more interesting and significant to the medium. 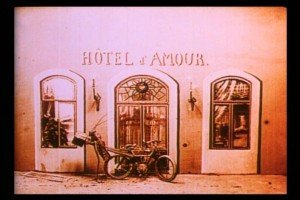 Ladislaw Starewicz created creepy spindly characters way before Tim Burton’s The Nightmare before Christmas (1993) and he used real insects! Starewicz was the founding figure of three-dimensional or object-animation in cinema. The Cameraman’s Revenge (1912) tells the story of insect infidelities but is also a film about film with a film within the film. Along with Mr and Mrs Beetle there is the Grasshopper Cameraman who films the infidelities and could be a possible ancestor of Hopper from A Bugs Life (1998).The animation of the dead insects in The Cameraman’s Revenge is so believable that audiences at the time thought Starewicz had trained the beetles to perform for the camera. The models and sets used are made to an incredibly high standard of realism and the movements of the insects are fluid and mesmerising. There is a meticulous attention to detail that can be seen in the current stop- motion animation of Aardman Studios. Starewicz had a direct influence on animator Jiri Trnka and Terry Gilliam but the intricate puppet work can also be linked to Jim Henson’s puppetry and the brilliant Labyrinth (1986). 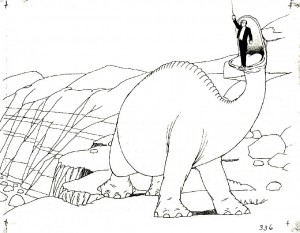 Winsor McCay started out as a newspaper cartoonist, he then began to incorporate his drawings into a vaudeville act which later evolved into animation. His masterpiece was Gertie the Dinosaur, released in 1914, which featured the very first cartoon personality and was based on the Brontosaurus skeleton in the American Museum of Natural History. Gertie was playful and cheeky, she interacted with the animator and she was rounded and cute to appeal to audiences. The lovable dinosaur was the main attraction and she is the first animated protagonist. The film features anthropomorphism, assigning human characteristics to non-human characters, a method which was to dominate early animation and still remains today, most notably in Disney and Pixar’s animated feature films.

Otto Messmer and Pat Sullivan Studios created the quintessential 1920s cartoon figure. Felix was based on Charlie Chaplin and was rather angular to begin with. He had an urban edge and was thoughtful and mischievous. To enable more efficiency and ease in repeated drawings Felix became a lot more rounded which was also a much more aesthetically pleasing look. Many other rival cartoon cats appeared but Felix had the winning personality and the fact he was a jazz-age modernist character meant he appealed to mass audiences. Felix was the first character created specifically for the screen, he did not start out in comic strips like most characters, and a lot of profit was made from Felix through mass merchandising. The cartoons used transformation and metamorphosis; themes which still dominate animation today and can be seen in Disney’s The Princess and the Frog (2009).The flat, simple style of the animation has also been resurrected in the South Park television series and film South Park: Bigger, Longer and Uncut (1999). 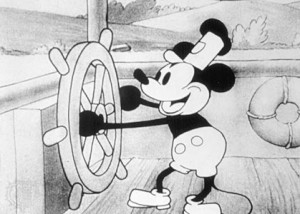 Of course there had to be some Disney in here and who better than the iconic star that is Mickey Mouse. Directly influenced by Felix, with the rounded simple black shape on a white background, Disney developed a mouse who had his first appearance in Plane Crazy (1928) and was seen with sound a little later in Steamboat Willie (1928). Mickey was not very developed as a character at first, there were two types of Mickey, sad and happy, and he was used to introduce other characters to begin with. But he was loved for his affable and acceptable nature and almost blandness and became an icon; in the 1930s he was bigger than any of the film stars and he remains an iconic symbol to this day. Mickey’s character development by Walt Disney and his success lead to the animator creating some of the most popular feature film characters ever and Mickey had his own starring role in the feature film Fantasia (1940) and Fantasia 2000 (1999). 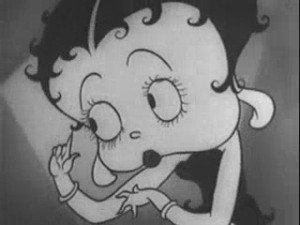 Max Fleischer created one of the strongest and most popular female cartoon characters in animation history. She debuted in Dizzy Dishes in 1930. Betty started off as a minor character, a female canine love interest to Bimbo, and was likeable and popular so she was developed and became a star in her own series. Her dog ears were transformed into earrings and she became more of a flapper girl giving her sex symbol status. Her female figure could adopt the modernity of the time in terms of short skirts and also immigrants could understand her, due to her use of urban language. However, because of the Hayes Code in the mid-1930s Betty Boop was toned down, she was given a longer dress, had to be less sexy and was much more of a career girl. Jessica Rabbit in Who Framed Roger Rabbit (1988) is said to be based on Lauren Bacall, Rita Hayworth and Veronica Lake but surely some credit must be given to Betty’s exaggerated female form as inspiration? 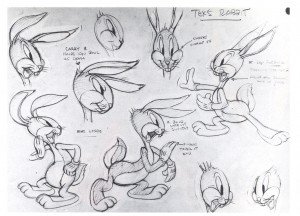 Warner Bros. were the antithesis of Disney, their drawings were graphic and simple, the pace was hectic, gags were based on speed and their characters were manic and knowing. Bugs Bunny is one of the best characters to come out of this distinctive style and he had his own catchphrase too. It took a while for the bunny to be developed but Tex Avery became involved and Bugs was born in 1940, his first proper outing in A Wild Hare. He often broke the fourth wall by talking directly to the audience and he had a nonchalant attitude mixed with anarchic irony. A modern day equivalent can be seen in Bart Simpson from the television series The Simpsons and The Simpsons Movie (2007). An often cruel, mocking sense of humour determined the early Bugs Bunny and up until the 1950s he was wild and immature, sounds just like Bart! 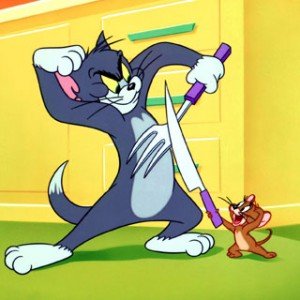 Okay, so technically these are two characters but you can’t have one without the other so I have allowed this double act as one entry. Tom and Jerry are the original cat and mouse and the chase combined with extreme violence provide the formula for the animation as well as many an action film. Hanna Barbera’s popular characters, who emerged in 1940, reinforced the animal double act and their long running rivalry, which the humans are completely unaware of, can be seen as an influence on modern day films such Cats and Dogs (2001) which incorporates animal rivalries and violence.  The exaggerated actions and precise use of sound effects as well as the wild and crazy pace also demonstrate Tex Avery’s influence on Hanna Barbera. The comic violence of Tom & Jerry is ground-breaking and regardless of its appropriateness has often been parodied, most notably in The Itchy and Scratchy Show from The Simpsons, Tom & Jerry are certainly embedded in popular culture. 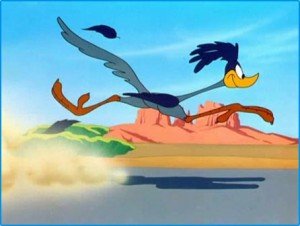 So another Warner Bros. Looney Tunes character but a Chuck Jones creation this time and although the audience does always sympathise with the Coyote, without Road Runner there wouldn’t be a Coyote. Jones created the character in 1948 and the duo debuted in Fast and Furry-ous in 1949. Road Runner is a revolutionary non-talking character in a talkie whose on-going battle with Wile E Coyote is the basis of the humour. The classic chase formula is influential on all kinds of films and the elaborate contraptions that Coyote develops to try and catch Road Runner could be seen as a forerunner to the contraptions in the Wallace and Gromit films. So maybe Road Runner doesn’t seem like an obvious choice but for me these simple but strict rules that were always adhered to by the animators are enough to recognise the brilliance.

1. Road Runner cannot harm the Coyote except by going “beep, beep”.
2. No outside force can harm the Coyote — only his own ineptitude or the failure of Acme products.
3. The Coyote could stop anytime — IF he was not a fanatic.
4. No dialogue ever, except “beep, beep”.
5. Road Runner must stay on the road — for no other reason than that he’s a roadrunner.
6. All action must be confined to the natural environment of the two characters — the southwest American desert.
7. All tools, weapons, or mechanical conveniences must be obtained from the Acme Corporation.
8. Whenever possible, make gravity the Coyote’s greatest enemy.
9. The Coyote is always more humiliated than harmed by his failures.
10. The audience’s sympathy must remain with the Coyote. 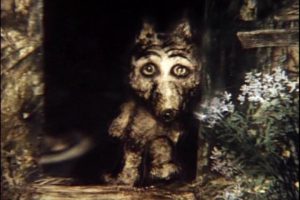 Generally considered one of the greatest animated films ever made, Yuri Norstein’s Tale of Tales (1980) is a film about memory and childhood and the little grey wolf character is the embodiment of this. The film lacks any really developed characters other than the little wolf who has a sadness and beauty that resonates with the film’s themes of memory, history and political undertones. Tale of Tales features different styles of animation and drawings interspersed with each other which gives the film a dreamlike quality. The wolf cub is the associative link of the narrative and demonstrates how animation and an animated character can be used in a profound way, incorporating serious topics such as history and politics with a cute, aesthetically pleasing character.  Daring and thought-provoking animations do not come along very often but Tale of Tales is certainly one and the more recent Persepolis (2007) and Waltz with Bashir (2008) can be considered worthy contenders. 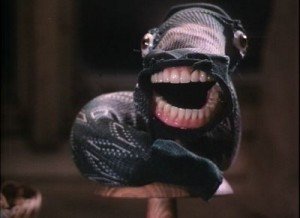 To be more specific the anthropomorphised sock caterpillar from Svankmajer’s Alice (1988), a much darker interpretation of Alice in Wonderland than the Disney animated film from 1951. Firstly Svankmajer’s sock creation is a little grotesque, surreal and menacing and can be viewed as a precursor to Tim Burton’s dark vision in films such as Corpse Bride (2005). Secondly, animating inanimate objects has become a mainstay in contemporary animation, be it Beauty and the Beast (1991), Toy Story (1995), Cars (2006) and the soon to be released Cars 2 (2011), inanimate objects are here to stay . Svankmajer’s gorgeously dark and creepy stop-motion animation is full of imagination and is worlds apart from the twee delights that are often associated with animation.