Science Fiction movies often paint a pretty grim picture of our future. Some of the very best films in this genre work on this basis and I’d argue that in purely cinematic terms, Dystopia trumps Utopia every time. There’s something inherently interesting about seeing these dark and desolate images which film makers can create. Maybe it’s a desire for us to see the perils that may lie ahead for humans should we not mend our ways. Or maybe it’s just the plain and simple fact that dark nights and pounding rain will always look cooler than green hills and bright sunshine. Whatever it may be, these depressing futurescapes come in many guises, be it post-apocalyptic landscapes with no rule of law, oppressive societies where the government rule with an iron fist or even worlds where humanity itself has fallen slave to greatly advanced technology. As different as the causes of their dreary visions may be, the theme these movies all share is a worryingly bleak outlook for mankind. Here’s a look through some of cinema’s best movie dystopias and what makes them so engrossing. 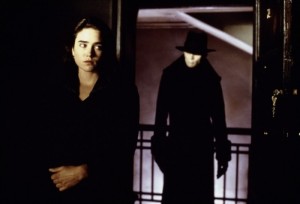 A true cult classic, Dark City was written, produced and directed by Alex Proyas and is an intriguing blend of neo-noir and Sci-Fi. The film follows John Murdoch, a regular guy who is accused of murders he has no recollection of committing. He is chased through the dark and dingy city streets by strange bald figures known as ‘the Strangers’. The City itself is an imposing sight, with towering skyscrapers faintly lit in perpetual night time. The structures appear to be looming down upon the humans that scuttle about the cramped streets with the city literally feeling like a prison. At midnight every night, the Strangers place every human being into a sort of coma and use this time to alter the surrounding cityscape as well as the humans’ memories and identities. These ghoulish figures prowl the city streets and are a haunting presence throughout the film. Ultimately it’s a hopeless circumstance for humans as they lose everything that makes them an individual and are unable to cling on to their memories. Issues of identity and even reality itself are questioned in this dark and fatalistic future. 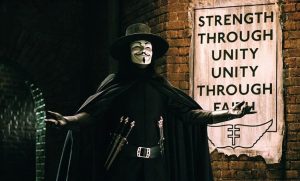 It’s a very American view of future Britain on display in James McTeigue’s V for Vendetta. We only ever see London, there’s a Benny Hill style comedy show on TV and everybody says ‘bollocks’ an abnormally large amount. Somehow though, in part perhaps due to its familiar setting, this adaptation of Alan Moore’s seminal graphic novel offers a strangely realistic Britain ruled by a ruthless totalitarian government. Any dissent against the government may result in imprisonment or even in permanent disappearance. The brutal Norsefire party punishes those it considers social undesirables and even Stephen Fry’s lovable television personality isn’t safe from its clutches. The government uses fear and scaremongering to keep the populous subdued and it takes a masked terrorist to rouse them from their slumber. 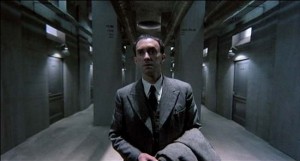 Terry Gilliam’s Sci-Fi fantasy film is set in a future crippled by bureaucracy and dominated by the oppressive machinery of government. Our central character Sam Lowry (Jonathan Price) works a menial office job and gets worn down by the monotony of daily life. He escapes via fantastical dreams where he soars above the murk of the city. The mundane nature of clerical work and the constricted nature of life under a totalitarian state makes Sam’s life deeply unsatisfying. Gilliam’s dystopian satire borrows heavily from Orwell’s 1984 (on which, more later) and morphs it with the director’s distinct bizarre tone. A world where clerical admin work is all encompassing is truly a horrific vision of the future. 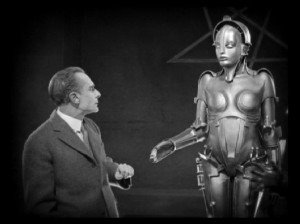 Made in 1927, Fritz Lang’s seminal German Expressionist movie is the prototype dystopian Sci-Fi movie. It is the blueprint for countless others that followed. Set in 2026, its futuristic imagery is as grandiose and striking as you’d expect from the German Expressionist genre. The wealthy industrial capitalists live the life of luxury above ground whilst the downtrodden working class live gloomy lives of misery working in the industrialists’ factories and living in squalid quarters. Considering when it was made, the cityscape that Lang and special effects expert Eugen Schufftan created is truly impressive. A daunting Babel-esque tower dominates the skyline and the surrounding skyscrapers creating an imposing city that is incredibly audacious in terms of size and spectacle. The plot may get a little muddled and the workers Vs capitalists theme is perhaps slightly dated, but the look and aesthetic of this film paved the way for pretty much everything else on this list, and for that alone it deserves your attention. 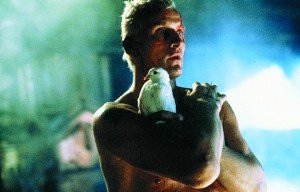 Ridley Scott’s cyberpunk future noir may not be as blatantly dystopian as some, but the film is engulfed by an overwhelming tone of fatalism and despair. The neon-lit city, bathed in perpetual darkness and awash with rain, is itself incredibly oppressive. The crowded city streets are filled with a distinct underclass who shuffle along the dreary streets while the wealthy corporation bosses live atop of skyscrapers away from the masses. Based on Philip K’ Dicks’ 1968 novel ‘Do Androids Dream of Electric Sheep?, the movie deals with the question of what it truly means to be human in a world where huge corporations have come to dominate society and human interaction is at a minimum. LA 2019 is not a happy time to be alive. 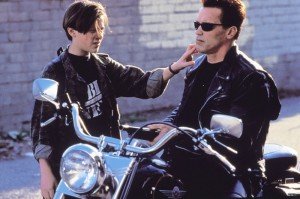 Obviously the blueprint was laid by the original, but in James Cameron’s high-tec sequel we got a truly alarming glimpse at earth’s future. From that legendary opening shot where a mechanical foot crushes a human skull into pieces, it’s clear the war with the machines was not necessarily going to plan. John Connor and his rabble of human soldiers scamper into crumbling buildings and trudge over swathes of rotting skeletons as hawking machines whir overhead in the blackened sky. The war against the machines is shown as being a gruelling and desperate time with few glimmers of hope……kind of like watching Terminator Salvation (I’m here all week folks). 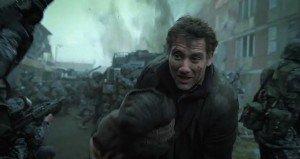 Much like V for Vendetta, what makes this dystopia so startling is its setting in the not so distant future. The dreary surroundings look, to all intents and purposes like the modern day Britain we all know so well. Children of Men is set in a world where women have become infertile and no babies are being born. Mankind literally has no future. Society has seemingly given up the ghost and riots are common place. The government can only keep control through heavy handed use of the army and immigrants are routinely rounded up and herded into camps. There’s no polished chrome or flashing neon in this future, rather it’s dirty streets and broken shells of buildings. Director Alfonso Cuaron went for grit and grime over slick polish and the film is all the better for it. As Clive Owen trudges despondently through London streets, surrounded by pain and misery, it’s the realism of the situation that really hits home. 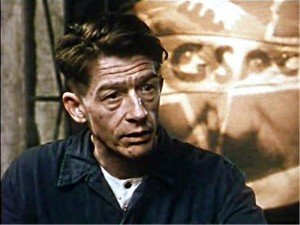 The George Orwell novel is the daddy of dystopian novels and this movie directed by Michael Radford and released, fittingly, in 1984 is a compelling adaptation. John Hurt stars as the downtrodden Winston Smith, a Ministry of Truth employee who lives in Oceania, a totalitarian state vigorously controlled by ‘the party’ under the watchful eye of ‘Big Brother’. The feared Thought Police roam the streets looking for anyone committing a thought crime which goes against the party’s wishes. This is the oppressive regime to end all oppressive regimes and the ever watchful eye of Big Brother means an end to all personal freedoms. John Hurt is on top form as Winston and the increasingly depressing situation he finds himself in is testament to the hellish future Orwell created. 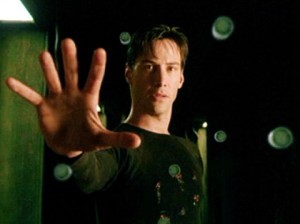 The future according to the Wachowski brothers could not be much bleaker for humanity. Much like in Terminator 2, we grew too reliant on machines and eventually they fought back. The ground war being fought in T2 would seem like a bed of roses to the few survivors in The Matrix as man has been forced underground, huddled near the earth’s core where there is still warmth. They scorched the earth’s sky long ago in a vein attempt to curb the machines power and so sunlight, plant life and even fresh air is a thing of the past. The most horrific aspect of this dystopian future however is that the vast majority of humans don’t even know it exists. They are unconscious slaves providing energy for the machines, blissfully unaware of their pitiful existence. 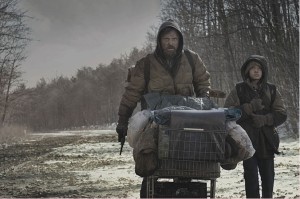 This unrelentingly miserable take on Cormac McCarthy’s novel delivers several dramatic gut punches as a man and his son struggle to stay alive in a post-apocalyptic world. We never see what caused the cataclysmic event that destroyed the vast majority of humans and left a scorched and polluted earth, the story is more focused on the two leads and their fight to survive. On their dangerous journey south, where they hope to find a warmer and more hospitable climate, they are forced to dodge cannibals and murders at every turn. It’s a startling depiction of how quickly society as we know it could break down. There’s little hope for mankind’s future in this movie, it’s a desolate and barren wasteland where every day is a struggle. Whatever you do though, stay out of a cannibal’s basement. You might not like what you find.