by Thomas Johnson
in Top Ten

To celebrate the release of Julian Barratt and Sean Foley’s new film Mindhorn (2016) on May 5, We have compiled a very opinionated list of the best British satirical, comedy films of all time. 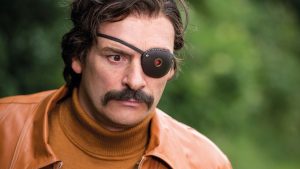 Julian Barratt stars in this tour-de-force of T.V. industry satire as the down-on-his-luck actor Richard Thorncroft. Hijinks are revived in this pitiful man’s life when he is asked by the Isle of Man police to revive his most famous outing, the T.V. detective Mindhorn, to try and catch a real criminal. Read our full review here. 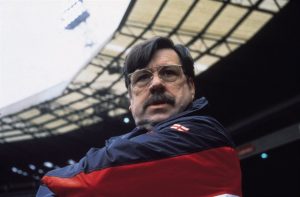 Ricky Tomlinson stars as the haphazard, corner-cutting manager who is put in charge of the England national team for their upcoming world cup effort. Everything goes horrendously wrong for Bassett and the team but they slowly make their way through the competition with many laughs along the way. 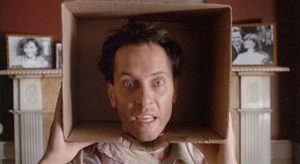 Richard E. Grant starts as the advertising exec that grows a talking head on his neck when his career seems to be going so well. A clever thought on the ethics of large-scale corporate advertising, Grant plays that smarmy guy everybody loves to hate so well.

Sacha Baron-Cohen’s character that shot him to stardom goes from piddling his life away in suburbia to kicking it with world leaders and saving his hometown of Staines from destruction in this satire of the American urban influence on British civilians. Controversial when it was released, the Ali G character has remained a classic and this film is a perfect feature-length outing for him. 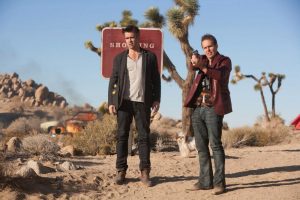 Lauded playwright Martin McDonagh’s take on crime drama stars Colin Farrell, Christopher Walken and Tom Waits, in this interesting look into a scriptwriters daunting task of researching and finishing his script on psychopaths. Not as good as McDonagh’s first feature In Bruges but is more satirical. 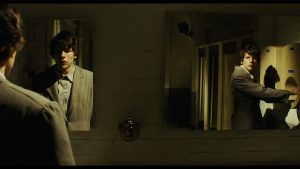 The Double is Richard Ayaode’s second feature and is based on the novella of the same name by Fyodor Dostoevsky. The film follows Jesse Eisenberg as an enhanced, identical copy of him gets a job in his same office and seemingly begins to ruin his life. The film parodies the industrialisation of the world in a very Brazil kind of way.

Satire-king Chris Morris’ first directorial debut follows a gang of wannabe jihadists in their task of carrying out their interpretation of the will of Allah. With basically no knowledge of terror tactics and how to converse with fellow radicalised Muslims, the group manage to make the Western world’s biggest fear seem as hilarious and farcical as anything Dr. Zeus coughed up.

What can be said about the Pythons’ religious epic satire? No-holds-barred laughter convulses throughout as Graham Chapman’s Jesus replacement, Brian, is continually mistaken for the Son of God.

Visionary auteur Terry Gilliam’s insightful and highly comedic foray into world mechanisation and bureaucracy is a tour-de-force of British cinema. Packed with stars, dystopia and many laugh-out-loud moments the ex-Python’s classic rivals Orwell’s vision of a disturbing future ahead. 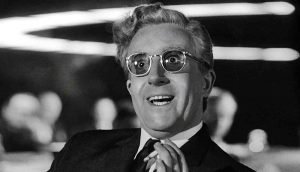 Stanley Kubrick’s entirely original; black comedy masterpiece is potentially one of the best political satires ever made. Peter Sellers plays various characters in this cold war spin that not only induces forceful laughter but also highlights the ludicrousness of the war itself. With as many memorable moments and cultural reference points as the Vietnam War, how could this magnum opus not top this list?

If… (1968)
Lindsay Anderson’s brilliant satire of British private school life would have made this list had it been a comedy.

Spacetruckers (1996)
Stuart Gordon’s bonkers comedy sci-fi about a space delivery pilot, played by Dennis Hopper, would definitely have made the list had it not been a co-American-English-Irish production.

Putney Swope (1969)
Robert Downey Senior’s mother-of-all corporate satire needs to be watched and rewatched and then spoken about for the rest of time. It is unfortunately American.