UK cinemas are currently seeing a limited re-release of the Studio Ghibli classic Grave of the Fireflies (main image) to celebrate its 25th anniversary, along with My Neighbour Totoro, which was also released in 1988. This is actually the first UK cinematic release of Grave of the Fireflies, which is extremely exciting news. Why? Because no one can see you cry in the dark. Grave of the Fireflies and its tale of two siblings fighting for their lives in war-torn 40s Japan is the most depressing animation you will ever have the fortune/misfortune to watch. Hey, why not add this list on and turn the whole thing into a super depressing marathon? Will you survive the whole thing before your tears suck your body dry of moisture? Only time and cute dying animals will tell. 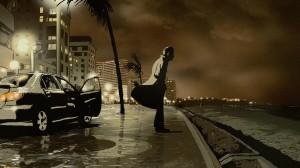 How can we possibly comprehend the horrors that take place under the banner of war? Filmmaker Ari Folman couldn’t and he had fought in one, serving as a young man in the 1982 Lebanon War. Waltz with Bashir follows his journey to reveal the experiences of war his amnesia had all but erased from his memory. What is uncovered is his amnesia was suppressing overwhelming guilt over certain actions during the war. Technically a documentary, combining talking head-style interviews with hallucinogenic reconstructions of Folman’s memories, it needs no explaining that Waltz with Bashir is an extremely harrowing watch. 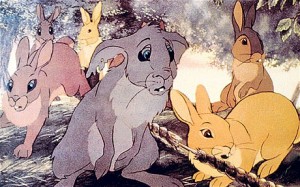 People have way too much sympathy for rabbits considering just how much of their time they like to spend breeding, and Watership Down is the reason why. There’s just so much unnecessary sad bunny death in this movie, it’s insane. It’s like bunny Black Hawk Down. Just have a read of the tagline to this movie/actual quote: “All the world will be your enemy, Prince with a Thousand Enemies, and when they catch you, they will kill you…But first they must catch you.” Hey kids, THE WORLD IS A TERRIBLE PLACE YOU SHOULD BE IN CONSTANT FEAR. 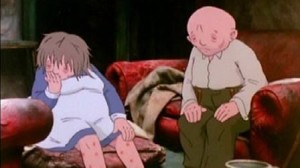 Although you might not be familiar with When the Wind Blows, you will be with another animation based on a Raymond Brigg’s graphic novel. That’ll be The Snowman, the charming Christmas story that ends with the reminder that nothing good in life lasts forever. In When the Wind Blows, however, we’re treated to the charming story of a elderly couple slowly dying from radiation in an imagined nuclear holocaust. Fun! 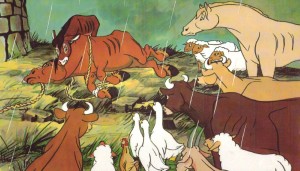 It’s the depressing animated adaptation of the depressing novel which fools people into thinking it’s o.k. for kids to read it because it’s all about cute talking animals. Sure, it’s cute talking animals, but it’s cute talking animals that act as a barely veiled metaphor for Communist Russia. Death, power struggles, oppression, and conformity. Sounds like all the ingredients of my last birthday party. Really, there’s nothing cheerier than the idea that true equality will realistically never function in human society; it essentially exists as a manifesto on why humans suck. And if you’re not feeling pessimistic enough about this movie, did you know that this was funded by the CIA and so is actually just a piece of Cold War propaganda? 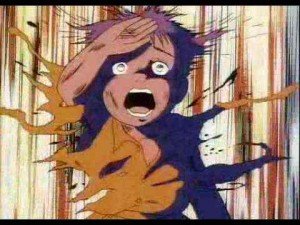 A kind of spiritual kin to Grave of the Fireflies, Barefoot Gen also portrays the experience of WWII-era Japan through the innocent eyes of a child. Based on a manga series by Keiji Nakazawa, it documents Nakazawa’s own experiences as a survivor of the devastation caused by the atomic bomb dropped on Hiroshima on August 6th, 1945. The sequence which portrays the first moments after the bomb hit the city is simply traumatising to watch; the animated genre offering the ability to unflinchingly show the deaths of immediate victims of the blast to devastating effect. Once seen it’s hard to ever forget. 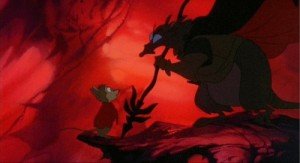 To be honest this could easily have been any of Don Bluth’s animated movies. While I know that Disney were and are more than capable of making grown adults weep, there’s just this extra air of suffering in Bluth’s movies that I can’t quite put my finger on. Oh no wait, I remember, he based the entire concept of a film around a dog dying (sure, All Dogs Go to Heaven, but that means they have to die first and that is not cool). The Secret of NIMH, however, is arguably the most suffering-iest of his movies; if only for the fact the titular NIMH stands for the National Institute of Mental Health. The kingdom lowly field mouse Mrs. Brisby discovers is in fact a group of rats escaped from the NIMH, having received human level intelligence through medical experimentation. And what does that human level intelligence bring of course? Backstabbing and murder, kids! 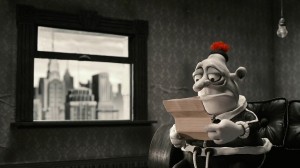 While technically a comedy, Mary and Max still follows a suprisingly sober narrative, following the friendship which blossoms between a deprived young Australian girl and a New Yorker suffering from depression and Asperger syndrome. It’s definitely one of those movies that dances that thin line between depressing and uplifting. It does dive straight into the world of mental illness and its devastating effects on personal relationships and daily function, but on the other hand the friendship between Mary and Max that grows and survives despite the trials is a pretty uplifting one. Well, watch it and you can be the judge. 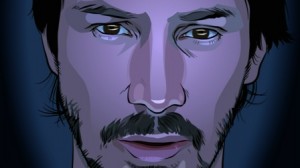 I just had to include this movie because there’s just something always depressing about dystopic visions of the future. I’ll always try and laugh off the dark premises of these movies because all the glow-in-the-dark “future fashions” are stupid and won’t ever happen. But then there’s the terrifying realisation that the glow-in-the-dark suits weren’t really integral to the story so it could still happen, just…without the glow-in-the-dark suits. A Scanner Darkly, which was filmed as live action and then traced over in a technique known as rotoscoping, even forgoes weird space suits in its near-future vision of a totalitarian society attempting to combat the epedemic of a highly potent hallucigenic, Substance D. Considering the struggles of the goverment today with the so called “war on drugs” and our increasingly intrusive society, this movie is truly plausible and thus pretty depressing to watch. 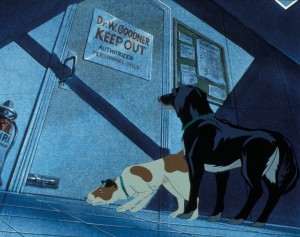 Seriously, Richard Adams? Why do you hate children so much? Plague Dogs was adapted from another of Adams’ novels of anthropomorphised critters and it’s a strong challenge to Watership Down on the depressing stakes. It follows the trials of two dogs who escape from a research facility and essentially become fugitives, barely managing to stay alive in the brutal countryside. Which I guess is the kind of plot which could be a pretty tolerably upbeat adventure if it weren’t for the fact that (a) the film thinks it’s a great idea to continuously show scenes of gruesome animal experimentation including the repeated drowning and resuscitation of one of our protagonists and (b) IT IS IMPLIED THE DOGS EAT A PERSON. Jesus christ. 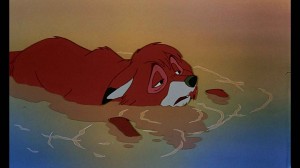 I kind of felt obliged to whack on a Disney movie at the end considering how many people are still emotionally scarred by the deaths of Mufasa and Bambi’s mother. However, while those are both incredibly depressing scenes, there’s still enough joy and optimism in these movies to keep them off the list. Optimism is not a word I would use to describe The Fox and the Hound, though. Oh yes, the friendship between little puppy Copper and little fox cub Tod is the cutest thing ever, but that’s only the beginning of this movie. And while their differences naturally drive them apart, you’d expect this Disney movie to end with them being reuinted and all the foxes and hounds putting aside their differences to form one happy, sunshine-y community. Oh, no. This movie instead simply ends with the acknowledgement that nothing will ever change and society still won’t let them be friends; they are simply left to wistfully remember the innocence of youth before adults came in and screwed everything up. ARGH. I HATE YOU SOCIETY.