by Craig Pay
in Top Ten

The word on Sylvester Stallone’s latest veiny, meat-head action extravaganza Expendables 2 has been mixed. Fans have, in the most part, reacted positively, whereas critics have been less impressed, particularly in regards to the script, which has been merrily torn to shreds in each and every review I have read thus far. One thing just about everybody agrees on though, is that Jean-Claude Van Damme steals the show with his unhinged, villainous turn as a plutonium crazed nutcase. Being a long time fan of the muscles from Brussels, I thought I’d ‘treat’ you all to a countdown of my all time favourite Van Damme flicks. 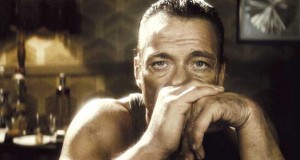 This particular oddity is more akin to a Charlie Kauffman film than the usual chop socky foolishness Van Damme is known for. The plot sees Van Damme playing an out of luck, broke and depressed version of himself who, having returned to his home town for a custody battle, finds himself taken hostage during a post office robbery. The highlight of this peculiar movie is a six minute monologue direct to camera, where Van Damme breaks the fourth wall and gives an impassioned and beautifully acted speech about his life of fame and the litany of regrets that came with it. It’s easily Van Damme’s finest performance, it’s award worthy stuff. Unfortunately, he hardly kicks anybody in the face, so it’s number 10 for JCVD. 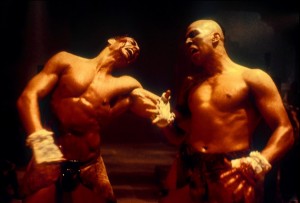 When Kurt Alone’s (Van Damme) brother is paralysed in a kickboxing match by terrifying, 26 foot tall, lunatic Tong Po, he vows revenge and begins his tutelage under expert teacher and arch piss-taker Xian Chow. Kickboxer is, in all honesty, a bit of a travesty. It remains a favourite of mine due to just two scenes. The final fight between Sloane and Tong Po is pretty awesome (both have their bandaged hands dipped in glue and broken glass beforehand, as ridiculed in Hot shots: Part deux), but the movie’s crowning glory is the scene where Sloane’s teacher gets him steaming drunk and makes him dance with a local tough guy’s girl, to see how he stands up in a real fight. The fight scene is okay, the dancing beforehand is the stuff of legend. 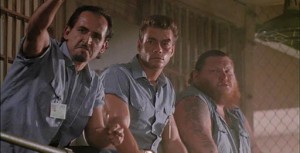 Louis Burke (Van Damme) is a Canadian undercover cop who must infiltrate a high security prison to break up an organ harvesting ring, cue lots of foolish gentlemen attempting to make Van Damme their bitch and getting their throats kicked off. There’s a good laundry room fight with minor action movie legend Al Leong (who has been offed on screen by every big action star going, at least twice), but the real fun comes in the form of Patrick Kilpatrick’s hulking, near indestructible, serial killer The Sandman, who Burke originally captured and winds up imprisoned with. Their final tussle is the sort of magnificently dumb, violent fun that great Van Damme flicks are made of. 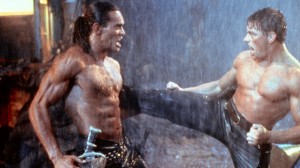 A post apocalyptic actioner with possibly Van Damme’s greatest ever character name, Gibson Rickenbacker, sees him attempt to safely guide a cyborg through pirate infested lands and deliver a cure for the plague that has wiped out most of the population. There’s a ton of good stuff here. There’s the brilliantly realised post apocalyptic world, courtesy of workaholic, madman director Albert Pyun (director of the surely magnificent Brainsmasher 2: A Love Story). Add to that some cool steam-punky weapons, an intimidating (but appallingly acted) villain, great fight scenes AND the most brutally violent use of the splits imaginable, and you have a real winner. Two random Cyborg facts, 1) It was originally conceived as a sequel to terrible He-man flick Masters of the Universe, and 2) one actor lost an eye when Van Damme stabbed it with a stunt weapon. The actor came away from court with nearly $500,000 in damages and the coolest story any grandchild has ever been told. 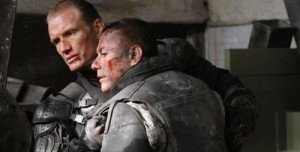 One of only two post-90’s Van Damme flicks to make the list, this little gem really took me by surprise. I’d avoided the majority of Van Damme’s straight to DVD films for the same reason I wouldn’t take a beloved pet home after it had been put down, it would just make me sad. I needn’t have worried about this one though, Universal soldier: Regeneration is a blistering old school fight flick, despite Van Damme and Dolph Lundgren being relegated to near cameo status. For the most part the movie belongs to UFC fighter Andrei ‘The Pitbull’ Arlovski’s beast of a villain, who is tasked with protecting a nuclear device by a terrorist group. After Arlovski has taken about three dozen, heavily armed soldiers apart at the joints, only one option remains, send in the 50 year old, Belgian ex-ballet dancer. What follows is Van Damme’s finest screen battle in a decade, an epic end to a surprisingly kick-ass movie. 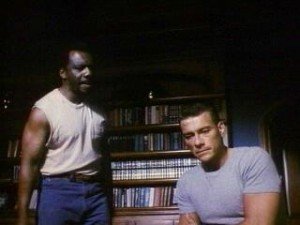 Probably the first Van Damme movie I ever saw, A.W.O.L. (aka Lionheart aka Wrong Bet) holds a special place in my heart. The movie follows Leon Gaultier (Van Damme) as he flees his post in the foreign legion after his brother is murdered by drug dealers. To aid his brother’s widow and his young niece, he teams up with a homeless fight promoter and joins an illegal fighting and betting ring. While A.W.O.L. is undoubtedly a bit daft, it is also heaps of fun from start to finish. The fight scenes are all thoroughly enjoyable (the final scrap is one of Van Damme’s best) and the cast all have surprisingly excellent chemistry with Van Damme. Deborah Rennard is delightfully spiteful as Cynthia, head of the illegal fight circuit (an organisation as camp as it is shadowy). Brian Thompson is truly hateful as Cynthia’s right hand man. It’s Harrison Page though who really shines as Leon’s loveable mentor/promoter Joshua. He and Van Damme share a chemistry and warmth that brings an unexpected emotional quality to the movie. It’s a silly, cheesy film, but I love it. 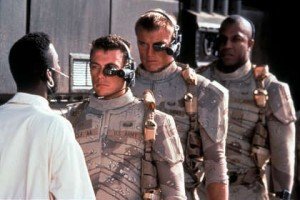 Before The Expendables came along, this team up between Van Damme and Dolph Lundgren (both at the height of their powers) was the ultimate action hero collaboration. The movie opens in Vietnam, Andrew Scott (Lundgren) has lost it, not only is he butchering innocent civilians, he has also started a seriously worrying new jewellery range consisting almost entirely of human ears. His comrade Luc Devereux (Van Damme) manages to take Scott down in a skirmish that leaves them both dead. Cut to the 90’s and both soldiers, along with a dozen others, have been reanimated as mindless killing machines (big stretch), but memories of their previous lives still linger. The main appeal of Universal soldier is in seeing the two leads go head to head, and they in no way disappoint, their final two scraps in particular are phenomenal. Separately, both are on great form too. Van Damme does the ‘fish out of water’ thing to great effect as he goes on the run with journalist Veronica (Ally Walker, excellent). Lundgren steals the show though as the utterly insane Scott, he’s gleefully violent and crazy throughout and Dolph is clearly having a blast. The supporting cast is also great, a perfect mix of ‘proper’ actors (Ed O’ Ross, Leon Rippy) and low level action goons (Simon Rhee, Ralph Moeller). It’s a terrific action movie that I think can stand alongside the best of the decade. 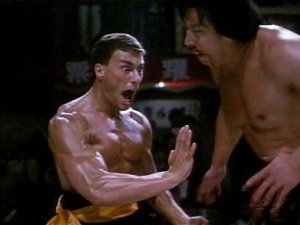 The film that put Van Damme on the map is this straightfoward story of a young fighter entering an underground tournament called the Kumite, to honour his dying master. Van Damme contributed much more than his performance to Bloodsport. The movie was originally shelved by the Hong Kong production company that made it after disastrous test screenings. It only reached cinemas much later because Van Damme was relentless in his championing of the movie, eventually being allowed to re-edit the footage for cinema release, the result was a 30 million dollar hit. Famously claiming to be based on the true story of Frank Dux (the movie’s fight coordinator), there has always been controversy surrounding Dux’s claims, many suggesting them to be outright lies. None of this however takes away from what is an exceptionally entertaining movie, chock full of excellent fight scenes, numerous (occasionally peculiar) fighting styles and an unnecessary amount of footage of Van Damme doing the splits. Bolo Yeung is probably Van Damme’s greatest cinematic adversary as the reigning champion Chong Li, a dead eyed kung fu nightmare made flesh, and his climactic battle with Dux is a belter. A great, old fashioned crowd pleaser. 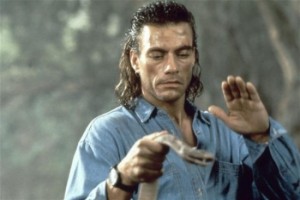 AKA the Van Damme flick that people are not ashamed to admit liking. The first US production from Hong Kong action legend John Woo is a bullet ridden, blood spattered take on ‘The Most dangerous game’, a tale of human beings hunted for sport (the similarly themed Ice-T action flick Surviving the Game is also excellent). When homeless drifter Chance Bordeaux (Van Damme, sporting a revolting, straggly mullet) rescues Natasha (Yancy Butler) from a group of muggers, she enlists his help in tracking down her homeless father, a victim of Emil Fouchon’s (Lance Henricksen) elite hunting group. If you remove the boundless horror of Van Damme’s hairdo from the equation, then Hard Target is a pretty flawless action flick. The action scenes are hugely inventive, brutally violent and bursting with energy and excitement, chock full of Woo’s signature style and flourishes. The bad guys are magnificently evil, Lance Henricksen reliably brilliant as the head big bad, while Arnold Vosloo nearly steals the show as his cackling, deadly right hand man Pik Van Cleef. Then there’s Van Damme, giving one of his warmest and most likeable performances as the badass drifter with a heart of gold. It’s pure action genius through and through and endlessly rewatchable. It is also the only film where Jean-Claude Van Damme punches a snake in the face, what more could you want? 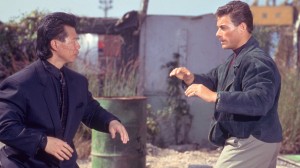 My personal favourite and a film that I’ve watched more times than I care to admit is this little beauty, featuring two Van Dammes for the price of one. The first of several movies with Van Damme in dual roles (a strange obsession of his it would appear), in this case playing twins Chad and Alex Wagner. Separated as infants after their parent’s murder, they are reunited by loyal Wagner family bodyguard Frank Avery (an effortlessly brilliant Geoffrey Lewis) many years later and set on a path of revenge. My reasons for loving Double impact are many. The action scenes are plentiful and all terrific fun, featuring a good mix of martial arts and blazing gunfights. The cast are also great, Geoffrey Lewis is superb in the wise mentor role, while both Phillip Chan and Alan Scarfe make for excellent, boo-hiss panto villains. There’s even a reunion for Van Damme and his Bloodsport nemesis Bolo Yeung as terrifying henchman Moon. Best of all though is Van Damme himself, playing twin roles with real conviction and succeeding completely in creating two, separate and believable characters. It’s the kind of movie that scores sod all on IMDB and got slated by most critics, but I’ll still be watching it with a goofy grin for many years to come, because it is FUN.

Craig Pay is a movie nerd and freelance artist living in Cardiff with his equally geeky wife and kids. He enjoys most genres of film, with a particular fondness for horror movies, dark or surreal comedy, world cinema and cheesy action flicks, especially the films of Jean Claude Van Damme. He also enjoys HBO, video games and growing an epic beard, just about anything else that allows him to avoid fresh air and natural light.