Christmas is here again which can only mean one thing – it’s ‘Panto Season’!  We at Flickfeast decided to put on our own production, but became stuck.  Who should be our villain (it’s a well known fact that it’s not sappy Prince Charming or sugar sweet Cinderella that are best loved, but her bitter and twisted stepsisters that everyone’s secretly rooting for).  However with so many contemptible characters to choose from where would we start?  Well we decided we could do worse than to look to Disney for inspiration – the studio who built their fairytale reputation on scaring children (and adults) with a cornucopia of evil queens, wicked stepmothers and rakish rogues.  So settle down as the curtain rises on the top ten Disney delinquents who could teach those Panto baddies a thing or two! 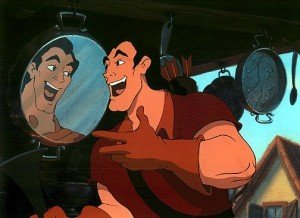 The nasty piece of work here is not as might be first thought ‘The Beast’, who is really nothing more than a misunderstood and lonely prince (well ok, it was his inability to love anyone which initially put him under the curse – but hey, no-ones perfect even in fairytales, and of course he comes through in the end).  No, it’s Gaston, the preening, scheming, schoolyard bully who, in a lightening illuminated climax upon the storm battered rooftops of the beast’s chateau, is thrown to his death after literally stabbing the beast in the back (the hero should always know better than to turn their back on the villain of the piece).  Anyway after Gaston falls into the valley below never to be seen again (you don’t get gory deaths in Disney films – the baddies just, disappear ……..) the beast is transformed back into a handsome, muscly ‘Abercrombie & Fitch’ prince and he and Belle live happily ever after – awwww!  One of the most memorable characters in the film is actually a subsidiary one – an all-singing, all-dancing teapot called Mrs Potts voiced by the legendary British actress Angela Lansbury.  In the film Lansbury’s character sings the theme song ‘Beauty and the Beast’, which won an Oscar for Best Original Song, one of the film’s two wins in the six categories for the which it was nominated. 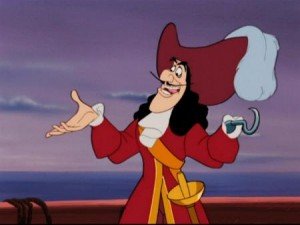 Disney’s fourteenth animated feature, the studio originally intended it to be a follow-up to Bambi (1942) and had been working on it during the early 1940’s until the outbreak of World War II put the film’s production on hold.  The tale of Peter Pan, the boy who never grows up, and his mischievous fairy sidekick Tinkerbell, also provides filmland with one of its most memorable and flamboyant villains.  The wonderfully swaggering and sneering Hook may be a dab-hand with a cutlass, but unfortunately he’s no match for the croc with a tock, and comes to suitably snappy end.  That the film was said to be Michael Jackson’s favorite (he named his ranch ‘Neverland’ after the mythical homeland of Peter), should be taken as no indication of the film’s worth, as it has always been one of Disney’s most popular adaptations. 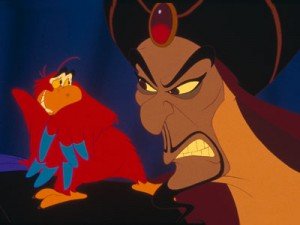 The old idea of a sly and manipulative advisor trying to influence a weak and bumbling monarch was nothing new.  However the evil Jafar in Disney’s take on an ‘Arabian Nights‘ fantasy takes slick to a whole new level (it’s a wonder the Middle East’s oil wells didn’t dry up).  That he doesn’t succeed with his plans to depose the Sultan comes as no great surprise, but at least we all have fun while he’s trying.  But how could he hope to get away with it when he’s up against a genie brought to manic life by Robin Williams.  All viewers can do when Williams‘ character appears is follow his advice and “lie back and ruminate”, whilst he “illuminates” the whole screen! 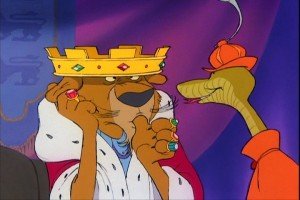 How could you go wrong when Disney based their characters for this classic tale of adventure and skullduggery amongst the forests of middle England on a whole zoo full of animals, including a suitably foxy Robin Hood with more than a hint of the Errol Flynn about him.  However it’s two of Britain’s finest thespians behind the villains of the piece, Prince John (depicted as a lion) and his advisor Sir Hiss (as a snake), who give standout performances.  Though of course thoroughly evil, Ustinov and Terry-Thomas give the double act an (almost) likable side – after all even the worst scoundrels have at least a smidgeon of good.  Never one to miss an artistic opportunity Disney incorporated Terry-Thomas‘ distinctive gapped teeth into the character of Sir Hiss to provide a convenient space for his forked tongue to dart out. 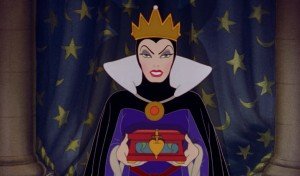 Seen in the light of today’s slick (and soulless) animation, Disney’s original masterpiece may appear a little rough round the edges.  However without this groundbreaking animated feature we would likely never have had a host of toe tapping penguins or swashbuckling cats grace our screens (which may not be a bad thing I hear you say!).  Snow White’s wicked Queen and the gnarled hag she transforms into set the standard for villains to come (and haunted a generation of children’s dreams), though few have ever managed to equal them for icy beauty and pure vileness.  None of the actors or actresses who gave life to the ‘cast‘ were credited in the finished production, though they didn’t really need to be as the magic of Disney’s animation spoke for itself. 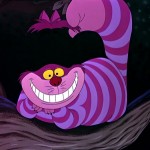 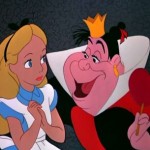 It’s hard to tell in this film who is worse.  The creepy mauve and lavender stripped kitty who lies languidly in the fork of a tree and delights in directing the unsuspecting traveller in every direction but the right one.  Or the despot Queen obsessed with the colour red – to the point her poor army have to paint some white roses that they mistakenly planted, a deep shade of crimson before their error is discovered and they loose their heads (this debacle incidentally produces one of Disney’s best songs ever, ‘We’re Painting The Roses Red’, sung with just the right note of manic intensity by the terrified soldiers to instill the horrific arrival of the Queen within the viewer).  Though not your typical Panto choice ‘Alice in Wonderland’ was first produced by Henry Saville Clark in 1886 as a musical pantomime for London’s West End with the blessing of the author himself, Lewis Carroll.  Disney’s version of the tale looks like it was shot on acid, particularly when Alice (voiced by Kathryn Beaumont who would later lend her talents to Wendy in the studio’s version of Peter Pan) joins in with the Wonderland ‘floral’ choral society in their enchanting rendition of ‘The Song of the Flowers’, which really sets the bizarre tone for the whole film. 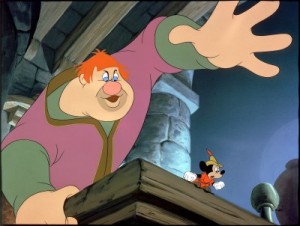 The Giant (voiced by Billy Gilbert)

If you can get yourself through the, lets be frank here, freakish opening segment where a cartoon Jiminy Cricket gatecrashes a party where a real life little girl and her only guests, two strangely humanoid, wise cracking puppets (don’t even ask!), are being entertained by an aging children’s party magician (they wouldn’t get this past the censors today), then you’re in for a treat.  Produced during Disney’s ‘Golden Age‘ the placing of Mickey and his pals Donald and Goofy in a medieval European setting where they have to save a singing harp from a monstrous giant, before their whole valley wastes away to nothing, is sheer, unsurpassed bliss.  That the giant called Willy (stop smirking in the back row, please!) is reduced to not much more than a walk on role when up against the studio’s legendary trio is of little consequence, as we all know its really Mickey and his friends that everyone wants to see.  Uncredited in this film, Billy Gilbert more than made up for this shortcoming by starring in over 200 productions during a long and successful Hollywood career. 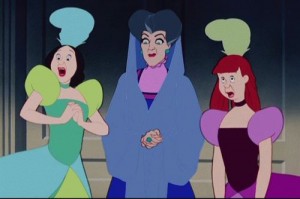 There is little you can say about Cinderella, than that it’s seventy four minutes of sheer Bibidi Babidi Boo!  From the mischievous and lovable mice Gus and Jaques to the bewitching Cinderella and pampered cat Lucifer, everything just came together in this film.  However it’s the poor orphan girl’s scheming stepmother and her spoilt daughters who will go down as three of the most insidious and reprehensible characters on the Disney ‘Walk of Shame’.  What happens to them in the end no-one knows as they are never seen again once Cinderella leaves to marry her prince – which is just the way it should be. 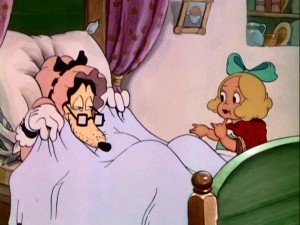 The Silly Symphonies were a showcase for Disney artists so they could show off their talents and imagination in a series of cartoons based around fantastical premises, the most famous being the pastoral Old Mill (1937)‘ (which anyone claiming to love film should have at the top of their wish list).  1934’s The Big Bad Wolf followed the previous year’s Oscar winning Three Little Pigs (1933), bringing its trio of porkers together again with their carnivorous nemesis, and the addition of Little Red Riding Hood, in an interesting mix of the two wolf based fairytales.  Everything of course ends happily round Grandma’s old piano, but not before a novel use for popcorn is found as a means to despatch the poor old wolf.

Seventy five of the shorts were created between 1929 and 1939, before the studio ceased their production after their ventures in full-length animated features proved so successful. 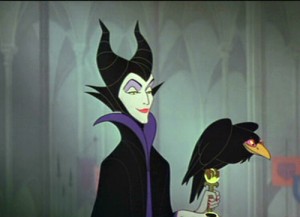 Coming in at number one is the Queen of Evil herself, Maleficent.  The three good fairies, Flora, Fauna and Merryweather may indeed be good, Prince Philip charming and Princess Aurora a slumbering beauty, but it has to be the slim, thin lipped enchantress who wins my heart every time.  Meeting one of Disney’s most spectacular and firey ends, Maleficent was instilled with an air of weary wickedness by Eleanor Audley, who had already made a name for herself as a Disney villainess by immortalising Lady Tremaine in Cinderella.  If only they’d been able to bring those two women together – that would be a Pantomime I’d pay to see! 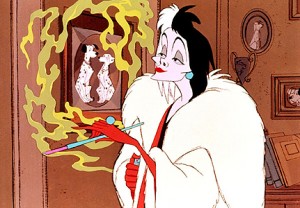 Disney’s visualisation of Dodi Smith’s classic canine caper will always be special to me, as it was its depiction of London, complete with foggy parks, lamplit streets and tall terraced houses which made me want to live there.  That the reality is very different doesn’t really matter as this story with its delectable dogs, scatterbrained owners and wonderfully over-the-top baddie is just the modern equivalent of those old tales by Perrault and Grimm.  Cruella’s piercing cry’s of “dahhlinng” when she makes her entrance, which soon turn to shrieks of horror when she thinks that the new born puppies are mongrels because they’ve got no spots, are enough to instill terror into any child and as such definitely deserve the Panto treatment sometime soon.