Film posters now are far more than just advertising tools to seize the attention of potential viewers. There’s now a complicated formula to their creation. Big star’s agents often demand their clients name be positioned higher than their co stars, whilst a galaxy of star ratings and carefully selected quotes from prestigious magazine and newspapers frame the faces of the films instantly recognisable cast.

However, before we all laid down and gave into mass globalisation there was a time in Eastern Europe when producing film posters was classed as an art form, some of which to this day remain as visually striking as they did back then.  Poland is now infamous for its poster art, offering us an insightful glimpse into the country’s history of communist control and its effects on the cinematic output of the time.

Towards the end of the 19th century Poland still lacked its own true identity. Its land was under split control by Russia and Austria. An era of external repression from the east (which wouldn’t truly be lifted until the fall of the Soviet Union) when counterbalanced with the artistic sensibilities of the west created a bizarre amalgamation of two opposing forces in Poland. Yet, cinema has taught us that sometimes this type of political controlled repression can create some truly wondrous pieces of art. Indeed, to this day most of Russia and Spain’s greatest films originate from either Franco or Stalinist rule, an example of how true art must have something to fight against in order to convey true passion and emotion.

Posters played an important part in Polish history. Mostly used as a form of communist propaganda, they were often the only colourful and visually stimulating objects visible on the streets. With the film industry being state controlled the western trappings of film marketing would not be allowed so the same artists used to create these state information posters were also put to work on film promotion. By the late fifties Stalinist control was over and the artists were allowed more freedom of artistic expression however, although a marked change can be seen within these works there still remains a strong soviet style behind them.

Polish film posters where driven by the artists who drew them rather than the industry promoting their wares. Often capturing one key scene or image which encapsulated the film, there was rarely any focus on a film’s star or director. Below are ten of the best posters originating from Poland during this time, some have been chosen for their artistic merits, others for the degree of misdirection their images promote – enjoy! 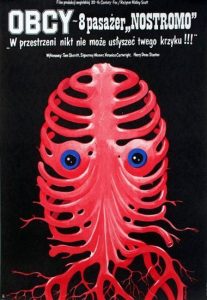 It seems here that the artist wasn’t made to watch the film, working purely on information that some kind of alien popped out of the crew’s stomach. 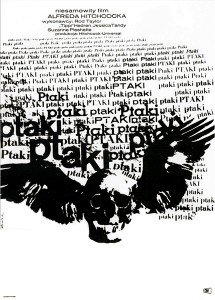 Looking more like the outline for a poorly conceived tattoo design than a film poster – it still manages to capture the horror of Hitchcock’s thriller. 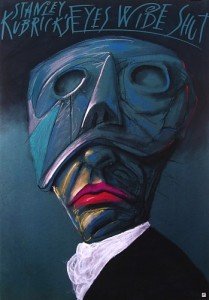 Perfectly encapuslating the surreal twists of Kubrick final film, this bleak portrait shows the forms transition away from its propaganda roots. 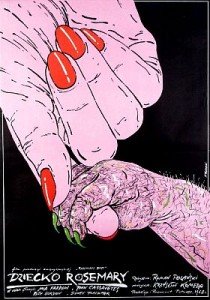 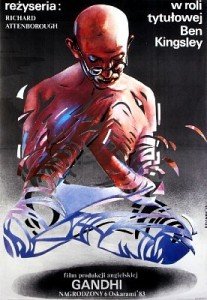 Despite making Ben Kingsley look like Dhalsim from Street Fighter this poster, whilst tonaly different from the actual film, captures its existential aroma of spirituality very well. 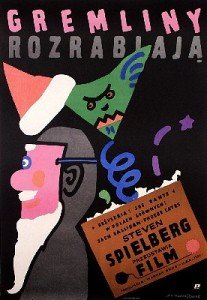 This on the other hand is so terrible it becomes instantly lovable. Use of block colours show that soviet era art was still very much an influence in the eighties. 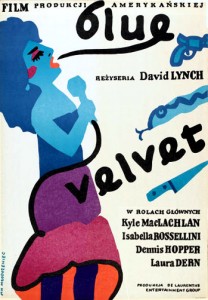 Almost as umcomfortably simple and twee as the film itself first purports to be. 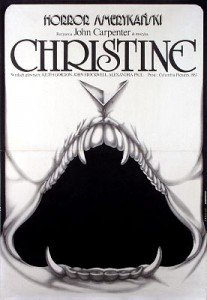 Using the grill plate of a car as a seemingly gapping void into the unknown allows this poster for John Carpenter’s, Stephen King adaptation to symbolically portray the films horrific premise very successfully. 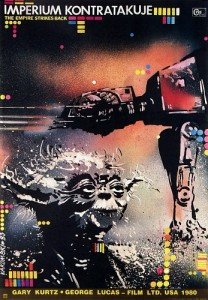 Looking like the cover to an old atari computer game, the childhood wonder and excitement of this hugely succesful trilogy makes for a piece of wonder wall art 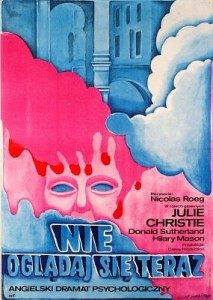 Whilst not having the same degree of peodophobic imagery as the western posters, this Polish version is undoubtedly just as wonderful thanks to its beautifully presented pastel shades

These are just a snapshot of what was once a bustling industry. Found any better? Then please link below.