The 1990s was quite an impressive decade for sci-fi movies; a near-worthy rival of the ‘80s. 1997 alone was probably the best year ever for good science fiction movies; besides the four spectacular ones on the list below, there was also the great Gattaca, and then some more commercial movies of the usual Hollywood caliber (i.e. ranging from awful to nicely entertaining), like Men In Black, Alien: Resurrection, Event Horizon, The Lost World: Jurassic Park 2, the excellent sci-fi/martial arts actioner Drive, the well-made low-budget time-twisting road movie Retroactive, the underrated Christopher Lambert vehicle Nirvana, aaand… a partridge in a pear-tree! And that’s just 1997. All right, I won’t try to list all the sci-fi movies from every year of the ‘90s; but simply mention that if the top ten was a top eleven, the 11th movie would be Dark City (1998). Another 1998 movie which I think might have deserved the #2 spot on this list is Pleasantville, but it has a debatable genre affiliation. For now I am going to categorize Pleasantville as a fantasy art movie rather than a sci-fi, so it will not appear on this list. I may change my mind in the future.

Now, let’s look at the cherry-picked ten best sci-fi movies of the 1990s: 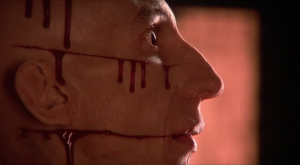 A handful of people wake up inside a cube-shaped room connected to other cube-shaped rooms, seemingly ad infinitum. They react very differently: one, a police-man, tries to take charge. Another, a mathematician, feels useless. One guy is mentally handicapped and a woman doctor is compelled to look after him. The group is forced to explore their strange new surroundings like mice in a maze full of deadly traps. They meet up with another guy; an ex-convict who has learned to avoid some of the traps. Eventually they discover that the cubes have prime numbers between them which reveal their relative positions – but the cubes are also moving around, changing positions. Most of the group don’t make it out alive. We never hear what’s outside. The movie is brilliant because it is an allegory of human history. Our pre-historical consciousness appears in a strange world that we don’t understand, and we try to deal with it in a diversity of ways, including war, science, crime and kindness. But we still haven’t entirely figured out what the world is and how to live harmonically in it. It is not yet certain whether we will survive or get ourselves killed. Great Canadian movie, made on a small budget – and still this director’s best work. 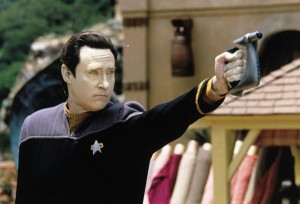 Insurrection, the ninth Star Trek movie, is generally maligned, even by fans, but personally I love the utopian feel and theme that runs through it. Starfleet has demonstrated some bad judgment in allying itself with the rather hideous So’na, who are now trying to relocate another culture from an exotic planet in order to get at the planet’s natural resources. Of course, the incorruptible Captain Picard and his Enterprise crew will not stand for this, and decide to remind Starfleet of its own ideals and standards. The plot does have some egregious flaws in its logic, but if you truly love utopian ideas, this remains great stuff. Click on the title to read my full review. 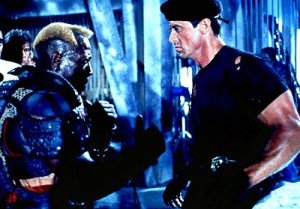 Sly Stallone is a super-cop who’s blamed for a lot of deaths in an exploding building, and sentenced to suspended animation for a whole lotta years. He wakes up in a very different future, which seems like a pacifist paradise, but is actually an effective totalitarian dictatorship that keeps people, shall we say, a little too happy. Even the police are shocked to encounter real violence, especially when dangerous ultra-criminal Simon Phoenix (Wesley Snipes) is also awakened from suspended animation to wreak havoc on a defenseless future. No self-respecting top ten of ‘90s sci-fi movies could be without Demolition Man, which is a sci-fi/action comedy of the highest order; a classic neo-1984 and an unofficial remake of Woody Allen’s equally brilliant 1973 movie Sleeper. 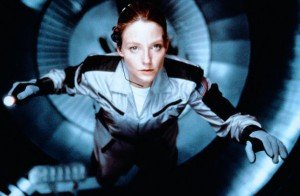 Carl Sagan was a lovely human being, and a beacon to all fans of science and science fiction. It is a genuine blessing to have a brilliantly well-made and acceptably faithful movie adaptation of his science fiction novel of the same title, directed by Robert Zemeckis and starring Jodie Foster. It is a movie that works on all levels. It has the extreme excitement and wonder of receiving the extra-terrestrial message; it has the political intrigue and machinations that come with the consequences of the message; it has science and technology culled from the alien message; it has good and realistic characters whose emotions you can identify with – and to cap it off it has a staggering philosophical analysis of science vs. spiritualism, based on the intensely personal experience of the main character when she meets the aliens. “Staggering” is the word I keep coming up with for this movie, both as regards its content and overall quality. If only we had a handful of movies like this every year, I would never again complain about how bad most movies are. 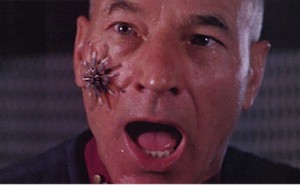 The eighth Star Trek movie gets better every time you watch it. What’s cool about it is not the pretentious thing about the Borg Queen offering to make Data human (although that becomes OK after repeated viewings), but everything else. The darkness, the Picard/Ahab analogy and the relevance to the past stories and history of the Borg and Picard and the beginning of warp drive and of the Federation itself. Both story and acting are sure-handed, the special effects are great, and the whole thing makes for a super-entertaining package. 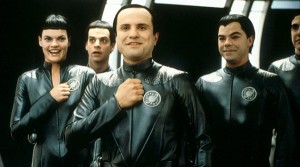 The spectre of Star Trek also flows through Galaxy Quest, one of the most definitive sci-fi comedies ever made. It is about a real-world set of actors who star in a Star Trek-like TV show. Aliens have seen the show and believe it to be real, so they come to Earth and request the crew’s assistance in fighting off their evil alien enemies. That the Earth people have no real technology is no problem; the kindly aliens have reconstructed it all based on the TV show! Of course, for the longest while, the Earth actors believe that they’re simply partaking in a publicity stunt. But eventually their eyes are opened, and with great production values and a superb screenplay, this means laughs that never let up. Star Trek references galore! The movie is made in such a way that, while it pretends to satirize Star Trek fans, it actually ends up vindicating them. For anyone who’s ever been a fan, this movie is a godsend! 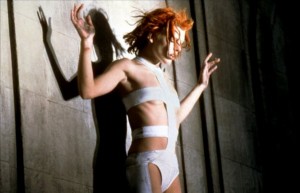 A super-green and super-well-produced sci-fi/action comedy, The Fifth Element is epic, mind-blowing fun! Bruce Willis plays Korben Dallas, an expert but retired military operative turned lowly taxi driver. One day the Supreme Being herself drops right into his taxi, learns to read and speak English in about a minute and asks him for help. It is the start of an inter-planetary romp across the galaxy, pursued by aliens and annoyed by the hilarious and self-absorbed space radio star Ruby Rhod! The enemy is some great evil entity that appears every 5000 years and must be defeated by the fifth element (and its Supreme Being personification), which is love. Milla Jovovich in the title role has a blast; her habit of over-acting fits right into this zany future world of cartoony violence, and in the end even Bruce Willis (who, for the longest time, I didn’t think was a good fit for his part) acquits himself well. This is Luc Besson’s best movie since The Big Blue (1988), which it almost equals in artistic terms, and surpasses in sheer entertainment value. 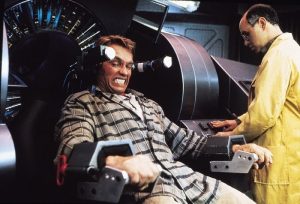 Most of Schwarzenegger’s movies are, in the final analysis, not great, but Paul Verhoeven’s staggering mind-twister Total Recall is the exception to the rule. An ordinary man dreams of adventure and excitement, so he gets a memory implant in which he is a Schwarzenegger who dreams of adventure and excitement, and gets it in spades! The movie is the entire implant, chronicling how he starts out as a common but latently heroic person with a conspicuously hot wife, and pretty soon he turns out to be a secret super-operative whose identity has been overwritten by his evil previous self, and who must now try to put things right. It’s a fabulously cerebral adventure, mainly taking place on Mars, filled with great one-liners and athletic babes, culminating in a reckoning with the ruthless corporate leader that controls the Martian air supply. And that’s not even mentioning the alien device for terraforming Mars in a few minutes… Don’t thank God; thank Verhoeven for this spectacular memory implant! 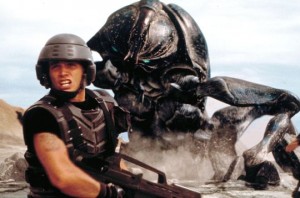 Yes, director Paul Verhoeven is the man behind two of the three best sci-fi movies of this entire decade. With Starship Troopers, Verhoeven adapts Robert Heinlein’s novel in a way that is both relatively faithful (except for the battle-suits of the novel, which don’t make an appearance until the climax of 2008’s Starship Troopers 3) and super-satirical. The future is a super-militarized place, where the right to vote depends on military service. There is a war on against some insectoid aliens, who are on the opposite side of the galaxy and therefore, naturally, must be destroyed. We follow Johnny Rico and his friends as they enlist in the military and make their careers there, ending up as damn good soldiers and proud citizens. Like Heinlein, Verhoeven succeeds in making this fascist utopia/dystopia seem, on the face of it, almost attractive, and its strident morals almost justified. If people will only give up their democratic rights and critical thought, they can have all the material comfort and leisure they want; no responsibilities. Only the military accepts the responsibility of running society, because only they are disciplined enough to keep the savage human inclinations in check. Without this bulwark, they say, humanity would soon destroy itself in selfishness, depravity and violence. Believable? Actually, yes. True? Almost certainly not, but it’s a hell of an interesting debate! The original novel is highly recommended. 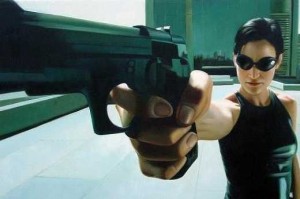 Morpheus, heir to an ancient wisdom, is on a quest to discover The One; a prophecied messiah and revolutionary that he knows must emerge eventually as a manifest product of his cultural zeitgeist. Once The One is found and shown the truth, he will be a staggering adept in the secret knowledge of how the world truly works. He will expose it, and transform and liberate human society, overthrowing the yoke that most people are too ignorant and miserable to even realize they are living under. This, of course, is not an original story. It is one of Western culture’s oldest allegories, repeated and refined in all forms of heroic fiction for thousands of years, from Gilgamesh to Star Wars. In The Matrix, however, the narrative reaches a conscious and concrete level of refinement that it only achieves in the greatest works of art, making it very clear what the archetypal hero’s historical role really is: to overthrow the oppression of our current social system in which 1% inefficiently lords it over 99, and gradually replace it with a state of empathy, equality and the boons of science – an operative word here being “gradually”, as people cannot handle too much change too suddenly. The genius of the Wachowski brothers is that they made a movie and a trilogy that can be interpreted in many other ways as well, including as a simple tract against machine intelligence. Only, Neo ends up merging with the machine intelligence in the third film, which signifies a benevolent unification of reason (science/technology) and emotion (human empathy). Upon its release The Matrix was an instant paradigmatic classic which went on to inspire many other movies. The greatest sci-fi movie of the decade, and perhaps the greatest sci-fi movie of all time.