With Christmas nearly upon us we thought it would be a great idea to get some of the flickfeast reviewers to select their favourite Christmas movie and tell all why they have a festive soft spot for it. And as a very special prize for someone who has been a good little boy or girl this year we will be giving away DVDs all of the choices in a competition! Ho Ho Ho Merry Christmas indeed! 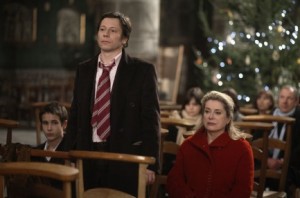 Arnaud Despleshin’s A Christmas Tale is a busy, original twist on the usual home-for-the-holidays movie with the director’s regular central character Matthieu Amalric and a juicy cast including Catherine Deneuve, her daughter Chirara Mastroianni, Emmanuelle Devos, Hippolyte Girardot, and Melvil Poupaud. Full of disasters but basically a comedy, it makes the problems an hostilities of a big family celebratory . In an interview at the New York Film Festival when Desplechin was asked why he liked Devos so much, he said there were too many reasons to list them. And it’s the mark of a great and original director, a role that Desplechin aspires to quite often deservedly, that he can keep using the same actors and always give them new things to do. We’ve seen Amalric as a madcap disaster before, but he’s still different this time. We’ve seen Deneuve as the grande dame before, but never quite like this, and her acting grows richer and more natural with every year. The whole pleasure of the film is in its scene-to-scene texture, the fun of the cinematic style (old-fashioned inter-titles help clarify the family structure, and iris fade-ins and fade-outs help keep things jaunty), and the sense of a world too elaborate not to be real–and yet, for devotees, also clearly a vision burst full blown from the head of M. Desplechin. In the end, despite the “Christmas tale” format, there’s ultimately not much you could really call cliché here. 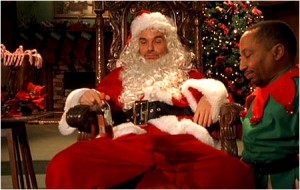 The inimitable Roger Ebert said, “You expect a happy ending, but the ending is happy in the same sense that a man’s doctors tell him he lost his legs but they were able to save his shoes.”

Great film. I’m going to order it on DVD this evening. 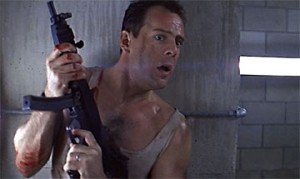 Die Hard might be better considered the definitive action film rather than the definitive festive film but it’s just not Christmas for me until I hear the words “Now I have a machine gun. Ho. Ho Ho.” For those of you who haven’t had access to a TV set in the last 20 years Die Hard tracks Bruce Willis’s John Mclane – a maverick NYPD cop – who takes an ill-fated festive trip to LA and winds up trapped in a skyscraper with a bunch of terrorists headed up by Alan Rickman (he’s got a terribly tapered accent and he’s not afraid to use it). What you gonna do? (Think dammit, think). Cause as much trouble as possible? Of course! Befriend a cop on the ground with a sad story to tell in order to inject intimacy into the situation when needed? Sure, why not. Oh and whilst you’re at it tie yourself to a fire hose and jump off the top of the building as a bomb simultaneously explodes – all to the heart-warming soundtrack of some of your favourite Christmas tunes. The fire is, indeed, so delightful.

The success of Die Hard is greatly due to its pitch perfect pacing and the fact that it doesn’t take itself too seriously. Willis’s John Mclane was so faultless a character that he, in many ways, became the last part Bruce ever played. Since his original stint in 1988 Bruce has played John thrice more and has portrayed a plethora of other similarly smart-headed hard-men who just don’t give a damn whether they live or die. None of his latter projects, of course, compare with the original white heat intensity of Die Hard which set the bar by which all future action films would (and should) be judged by. How many other Christmas film can claim that mantle eh?
Did I mention the fact that Die Hard is peppered by an amazing supporting cast? No? Must have still been trying to block out Rickman’s accent. William Atherton of Ghostbusters fame puts in a fantastic man-you-love-to-hate turn as the sleazy reporter Richard Thornburg. It’s safe to say he’ll think twice before trying to exploit McClane’s children for ratings ever again. Paul Gleason from The Breakfast Club plays the inept Police Chief Robertson trying to get the situation under control and Robert John Davi a.k.a Jake Fratelli plays the less-than-amused Fed: Agent Johnson who takes over when Robertson fails. Throw in a few window-smashing, bullet-dodging, shaft-crawling, quick-quipping action sequences, a tantalizing repartee between Willis and Rickman and a rendition of “Let in Snow” and, as far as I can see, you have everything you need for the perfect Christmas. 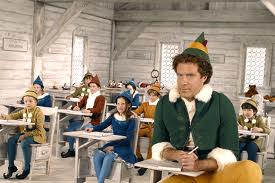 So, when we were all asked to pick a favourite Christmas movie here at Flickfeast and to write up a chestnut-roasting, turkey-fattening review I was almost overwhelmed. Because I love a LOT of Christmas movies. Some of them I love just because they’re great movies (Die Hard and Gremlins spring to mind but, what the hell, I’d even throw Home Alone into that group because I laughed so hard when I first saw it) while others I love because they’re very good movies made great with an injection of Christmas spirit. National Lampoon’s Christmas Vacation, The Muppet’s Christmas Carol, The Santa Clause, It’s A Wonderful Life, The Nightmare Before Christmas and, of course, Elf. But this choice was just the ONE movie. Me, being Mr Christmas, found this a tough one and then it dawned on me that it was very simple. There have been many years in the past, and there may be some in the future, when Christmas has been a financial worry and a tough time for me (as it is for many others) but I still cant help being swept along on the wave of extra kindness, festive cheer and mulled wine that this time of year brings. I still have a naive, goofy view of December and all it brings for us. Yes, I love receiving and giving great gifts but I also love having an excuse to wear a silly hat, I love decorating the tree and realising that I have left all of the harder to reach branches quite bare, I LOVE opening the window on my advent calendar every day and I love the fact that this time of year can make everyone try that little bit harder to get along and fan the warmth in their hearts a little bit more, irrespective of individual religious beliefs (despite so many things being connected with Christianity and other faiths). In essence, I AM Buddy The Elf and it’s a quality I have that I actually enjoy. Whether others feel the same way as I loudly burst into another verse of “Santa Claus Is Coming To Town” is a whole different platter of turkey sandwiches 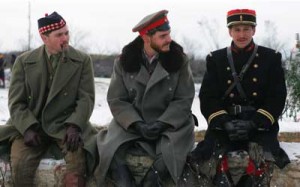 World War I. During Christmas Eve, the soldiers in the trenches, acting behind their superiors’ backs, declare an unofficial truce. French, German and Scottish soldiers, sworn enemies, play, drink, sing, bury their dead, exchange gifts, share stories, and pray together for twenty-four hours. Based on historical events, Christian Carrion’s Merry Christmas is a movie I love because of its celebration of the season’s spirit of solidarity. A war movie that is vehemently anti-war, Merry Christmas paradoxically shows men in horrible conditions behaving in the most humane and fraternal way possible. This simple miracle comes about when the soldiers start seeing themselves again as men and not as enemies. A question burns in our minds: why can’t all days have this effect on men? A movie that appeals to the best in us, Merry Christmas won’t leave any viewer indifferent to its inspirational message of peace. 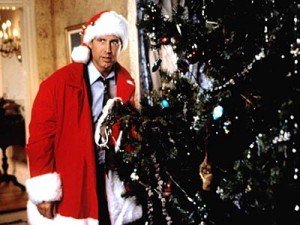 Growing up there were a select few holiday films that would play on our TV year after year. For many people it may have been It’s a Wonderful Life (1946) or one of the many film versions of the Charles Dickens classic, A Christmas Carol, but not at our house. Sure, I had seen those films, maybe even more than once, but the Christmas movie that got played at our house every December (and sometimes even in July) was National Lampoon’s Christmas Vacation (1989). Nothing says, “Happy holidays!” like a dysfunctional family, and no one in the 1980s could pull off dysfunction better than John Hughes. That’s right, John Hughes penned this holiday classic which features the Griswold family in their third Vacation movie. This time the Griswolds are staying home for vacation while the rest of the family comes to visit for a Christmas they’ll never forget. As you’d expect, Clark (Chevy Chase) quickly approaches a nervous breakdown as his loving wife, Ellen (Beverly D’Angelo), works to keep the family together. This becomes all the more difficult with the untimely arrival of Cousin Eddie (Randy Quaid in one of the best comedy performances in film history) and family. What follows is a haphazard family Christmas that will have you laughing out loud, shaking your head, and saying, “Oh my God!” as things go from bad to worse to even worse yet. With a great script and a stellar cast, National Lampoon’s Christmas Vacation will bring you years of holiday movie watching enjoyment while you appreciate your own family holiday experiences, that is, of course, unless Cousin Eddie shows up unannounced. 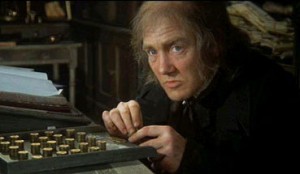 There is no room for doubt in my mind that Dickens’ ”A Christmas Carol” is the greatest Christmas story ever told. The miserly Scrooge is a representation of capitalism itself, and the story utilizes the three ghosts for the purpose of prophesying our entire social system’s future introspection and reformation. The classic tale has been filmed many times, and this 1970 part-musical version is not the greatest adaptation, but it was the one I had handy, and it does apture the (Christmas) mood of the story, and Al Finney does pull off the title character to a tee. 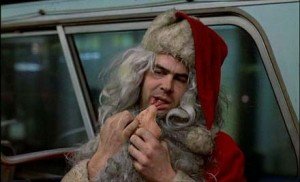 Another tale of capitalist greed and arrogance, and this modern take on The Prince and the Pauper isn’t what everyone might first think of when it comes to Christmas movies but to me nothing says Christmas more than a crazed, drunk, gun-toting, fish (and scene) stealing Santa!! That combined with one of Eddie Murphy’s finest performances make it an enduring Christmas classic.

So what do you think of our selection? What movies do you like to settle down to with some mulled wine after the Christmas lunch stuffing?