If you thought you hadn’t seen much from Hugh Grant lately, it would seem that there have been legitimate reasons for his absence from our cinema screens. The actor whose presence was ubiquitous in British romcoms during the late 90s and early 00s, has been busy recently working with the organisation ‘Hacked Off’ which raises awareness for victims of press abuse, after he himself was involved in the recent British phone hacking scandals. Grant was speaking to Reuters in New York on the eve of the release of his new comedy The Rewrite in which he stars as Keith Michaels, a washed-up Hollywood screenwriter who finds a new lease of life when he takes on work as college lecturer in order to pay the bills. 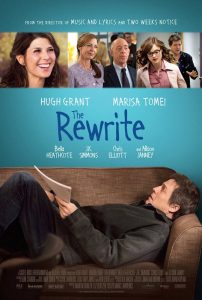 He explained that it is the comedy of failure which he finds a rich ground for characters, saying that “it is quite touching – people in a bad place in their life who then handle it well and then their life gets better.” Clearly though he has missed the ‘day job’ as he puts it for – despite promising that he will continue working with ‘Hacked Off’ in the future – he is to be seen on the big screen later this year in two films, the comedy drama Florence Foster Jenkins alongside Meryl Streep and Guy Richie’s upcoming reimagining of the classic 60s TV series The Man From U.N.C.L.E.