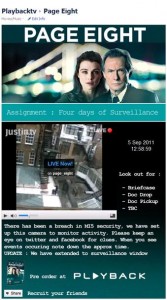 Their HQ’s security has been breached and they need the help of external agents to monitor their spy-camera and log the timings of each breach of security. This is a matter of urgency.

Intel will be provided from their network of underground sources across Facebook and Twitter to let all agents know when to initiate surveillance.

Agents are encouraged to log the timing of each activity and, after the last activity on Friday, will be able to submit their answers into a log book to get the chance to be rewarded with a Page Eight spy-bundle.

The spy-cam is hosted by JustinTV and accessible via their Facebook page under the Page Eight tab. The stream is embeddable and can also be installed to your Facebook tab as an App.

In the interests of national security Universal Playback need your help! Help them log the timing of suspicious activities carried out by rogue agents to win a Page Eight spy-bundle.

Check out the following link for details…

The feature-length drama, penned by Oscar nominee David Hare (The Hours), stars Bill Nighy (Pirates of the Caribbean, The Boat that Rocked) as long-serving MI5 officer Johnny Worricker and Rachel Weisz (The Mummy, The Lovely Bones) as political activist Nancy Pierpan, as they work together to uncover devastating revelations about political manoeuvres within the British Intelligence services. Also starring in this fast paced secret revolution is Judy Davis (The Starter Wife, The Break Up), Michael Gambon (The Kings Speech, Harry Potter) and Ralph Fiennes (Clash of the Titans, The Reader).

The story follows Johnny Worricker as he investigates his boss and best friend Benedict Baron (Gambon) who dies suddenly, leaving behind him an inexplicable file, which threatens the stability of the organization. Meanwhile, a seemingly chance encounter with Johnny’s striking next-door neighbour Nancy Pierpan seems too good to be true. Johnny is forced to walk out of his job, and then out of his identity, to find out the truth.

Featuring incisive extra materials such as interviews David Hare, Bill Nighy and other key cast and crew, and illuminating behind-the-scenes footage, PAGE EIGHT is a definite must-have for any fan of premium quality drama.

Trust will be tested and lives placed at risk as psychological spy drama PAGE EIGHT arrives on DVD today, courtesy of Universal Playback.