Rise of the Planet of the Apes – posters

At flickfeast we’re going ape over the impending release of Rise of the Planet of the Apes.

The latest installement in the POTAs franchise is an origin story set in present day San Francisco where man’s arrogance sets off a chain of events that leads to intelligence in apes and a challenge to our place as the dominant species on the planet. Caesar, the first intelligent ape, is betrayed by humans and rises up to lead his species’ spectacular race to freedom and the ultimate showdown with Man. In Caesar, WETA – the Oscar-winning visual effects team behind Avatar – have created a CGI ape that delivers a dramatic performance of unprecedented emotion and intelligence.

Rise of the Planet of the Apes combines fantastic storytelling with the next leap in Visual Effects for an emotional and action-packed motion picture experience unlike any other.

So yes, we are very, very excited about Rise of the Planet of the Apes at flick! It is out in cinemas 11th August and you can expect to see a lot of monkeying around on the site in the build-up to the big day. For starters we have the posters for you… 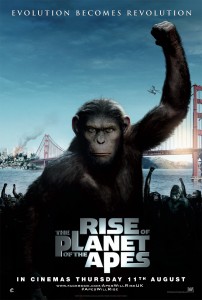 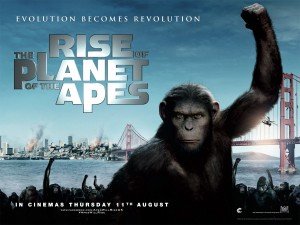