by Katie Smith-Wong
in Feature, News

There is a lot of love in the Thor: The Dark World press conference.  The third outing for Thor, played by Chris Hemsworth, sees him take on Malekith (Christopher Eccleston), the vengeful leader of an ancient race, hellbent on revenge against Asgaard.  As his world is threatened, Thor must team up with love interest Jane Foster (Natalie Portman) and reluctantly, his imprisoned brother Loki (Tom Hiddleston), to avoid the universe being plunged into darkness. 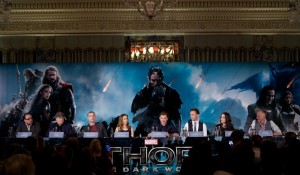 All the talk of darkness and revenge, however, is the furthest thing that comes to mind during the global press conference for Thor: The Dark World. The cast, director Alan Taylor and producer Kevin Feige talk about shooting in the UK, brotherly love and what Eccleston thought of the humour in Thor: The Dark World.

Thoughts on filming in UK compared to Hollywood:

Chris Hemsworth: Filming in Hollywood is predominately in sets and studios; the nice thing about here is that there are incredible studios but there’s brilliant locations to take advantage of.  I love the the aesthetic of this film because not only do you have Asgaard, but we also see London.  In comparison, most of these films are filmed with New York and American cities as a backdrop and I love the difference.

Natalie Portman: I love working here and I am envious of British actors and crews because American and, I guess,  Australian actors end up like gypsies; working movie to movie, moving cities all the time whereas you can have such a wonderful, fulfilling, rich career between theatre, TV and film in London.

Kevin Feige: What keeps us coming back here is the amazing crews; we’re doing our fourth film here in Shepperton [Studios] and it’s been an amazing experience.

Kevin Feige on Marvel’s strategy of films and television:

KF: We’re a very tight-knit group at the studios and so all the movies are very, very co-ordinated.  We have announced towards the end of 2015 and are currently planning as far out as 2017; some time next year, we’ll announce what films will be released between 2016-17.  In terms of the TV division, Agents of SHIELD is obviously the first series they’ve done; I know they want to bring more though I don’t know what they’ll be.

Christopher Eccleston: My character is completely grounded in violence, a maniac for revenge.  There were some scenes that didn’t make the final cut, which explained the backstory between me, my ancestors and Boor, Odin’s father – basically the Dark Elves were humiliated by Odin hundreds of years before and Malekith has slept on that. The job that myself and Adewale [Akinnuoye-Agbaje, who plays Algrim/Kurse] had was to bring the darkness, threat and the jeopardy – a classic peril.

Alan Taylor: Malektih is a fundamentalist; a purist – one of the major things in the movie for me is that most of our characters have to confront in one way or another, and there is one scene when Malekith confronts Odin and says, “you have to ask yourself as I once did; what are you willing to sacrifice for what you believe in?” Every character goes through a turning point like that in the movie and Malekith is the kind of guy who will sacrifice anything on principle.

CE: I watched the film last week and I was surprised at the amount of humour because I’m such as miserable bastard – I was completely excluded from any of the joy! (laughs)

Hemsworth on working with Hiddleston:

CH: This is the third film we’ve done together and from the beginning, we were lucky; we have had a chemistry and the same kind of enthusiasm; that’s the relationship I look forward to really delving into.

Tom Hiddleston: From the beginning of Kenneth Branagh’s Thor, through The Avengers all the way into The Dark World, it has been an amazing adventure for both of us.  The two characters define and need each other – acting is about what happens in the space between people and the more you trust each other, the deeper you can go and when I’m on set with Chris, I’ll serve and he’ll return and vice versa; that is what the job brings to me.

CH: I don’t know if it was the plan to have Loki in this many films, but the mixture of strength, villainous and mischief and vulnerability Tom brought to the table from the first film allows you to immediately empathise with this misunderstood guy – that’s probably why Loki keeps coming back. My hat goes off to Tom and he’s done such an incredible job. 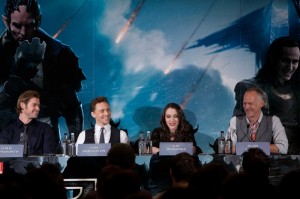 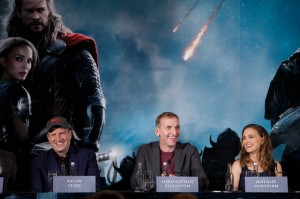 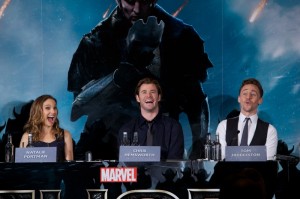 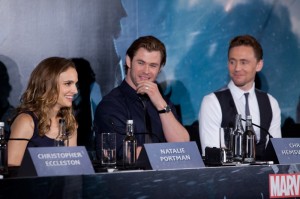 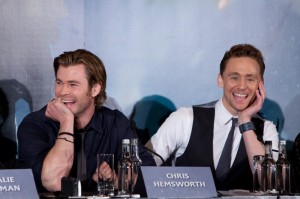 Thor: The Dark World is out in UK cinemas on Friday 28th October.