Like all major film studios Disney are never slow to capitalise on a good idea, though their sequels and follow-ups – at least where their animated features are concerned – are often released straight to DVD, or come in the form of shorts.  Such is the case with Frozen Fever, the animated seven minute quickie which follows the characters Anna, Kristoff, Elsa and Olaf from the hit film Frozen, as they prepare to celebrate Anna’s birthday, with anything but predictable results. 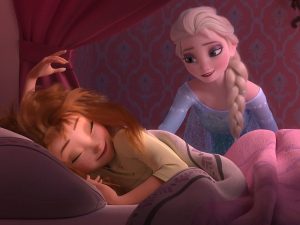 The mini cartoon directed by Chris Buck and Jennifer Lee – the brains behind its Oscar winning predecessor which became the highest grossing, most successful animated feature ever – will run exclusively in cinemas before screenings of Disney’s new live-action retelling of Cinderella which opens in the UK at the end of March.  The press will see this weekend whether the magic works a second time, when Frozen Fever plays before special screenings of Cinderella in London.