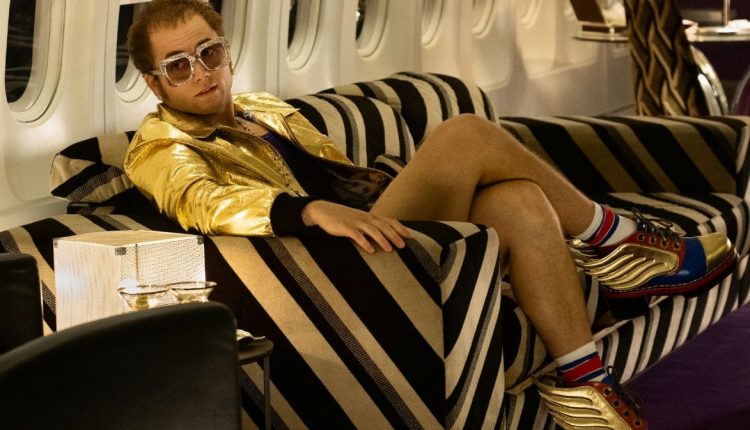 Watch your back, Michael Sheen. Someone’s gunning for your biopic crown. Hot off the back of playing Eddie the Eagle in Dexter Fletcher’s film of the same name, the Kingsman star is now gearing up to play Elton John in the director’s forthcoming feature Rocketman, with our first look a the film pictured above.

Sure looks like Elton John! There are almost certainly some dedicated Eltonians, as his fans probably call him, who could decode exactly which era of the musical icon and Watford FC president this is, based on contextual clues which — as is de riguer for his bold fashion sense — are fairly easy to pick out.

As a Eltonovice, all I can say is that Egerton, his costume and hair and make-up teams have done a bang up job of imitating the wardrobe and hairline of John in his prime. The musician has certainly lived a life worth dramatising, from his early work as a session musician through his meteoric (or rocket-like?) rise to stardom with songwriting partner Bernie Taupin, through this writing songs for The Lion King and the Billy Elliot stage musical.

Behind-the-scenes, John (as many men of his generation, in the public eye or otherwise) struggled with his sexuality, initially identifying as bisexual before coming out as gay and marring long-time partner David Furnish. It’s not clear how much of John’s life Rocketman will be covering, but here’s hoping it won’t be accused of “straightwashing” its subject’s sexuality in the same way the Queen biopic Bohemian Rhapsody — which Fletcher finished in Bryan Singer’s absence — reportedly has Freddie Mercury’s.

It’s going to be a lot of fun Egerton stretching himself a little, John’s whole vibe being a world away from the snarky wideboy of the Kingsman films, or the similar tough-guy minor roles he’s filled before and since. He’s joined in Rocketman by Jamie Bell, Richard Madden and Bryce Dallas Howard, which is an…eclectic line up, to say the least.

Rocketman is scheduled for take off on May 31 2019

My 20th Century Restoration Coming to ICA, Will Tour Country