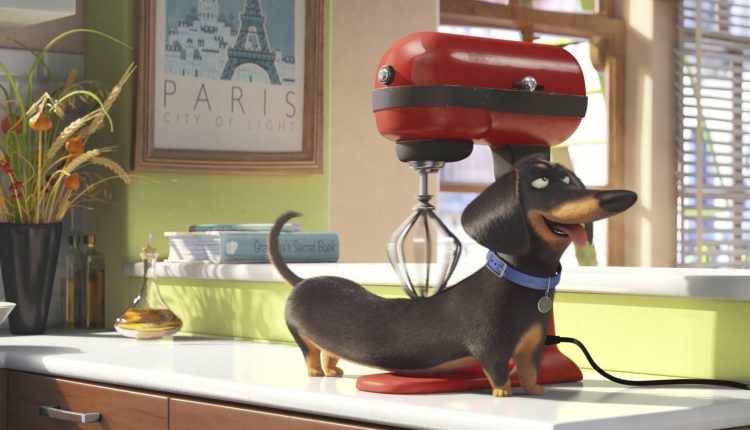 Since 2010’s Despicable Me, Illumination Entertainment has received steady acclaim for its features, achieving its first $1bn grossing film last year with spin-off Minions.  Now, the voice behind the yellow sidekicks and Despicable Me co-director Chris Renaud is stepping up to direct his first full-length feature on his own.

The Secret Life of Pets is set in New York, where terrier Max (voiced by Louis C.K.) has a perfect life with owner Katie (Ellie Kemper). However, his world is turned upside down when she brings home Duke (Eric Stonestreet), who immediately antagonises Max. As the two fight to be Katie’s only pet, they inadvertently get themselves lost in the city, triggering a rescue mission led by Max’s pomeranian neighbour Gidget (Jenny Slate) and their friends.

A key feature to Illumination’s films is the visualisation of its characters. From Minions to Hop‘s E..B, they play heavily on the cuteness factor that play into the film’s fun factor and subsequently, the film’s target audience. Unfortunately, there is a notable lack of development throughout; there is minimal insight behind the characters and the audience is given too little to form a rapport with them. In addition, the familiar Toy Story-esque plot, and certain scenes and jokes aimed towards older viewers, are ultimately lost in its simplistic script, and subsequently become unmemorable.

However, the animation is brightly coloured and the quick-pace chase scenes capture the attention of the audience. The vocal talents nicely fit the characters, with Kevin Hart being a standout as the sweet-faced yet short-tempered Snowball. In a way, The Secret Life of Pets follows an all-too familiar pattern; the dependency on having engaging characters to compensate a distinct lack of development.

Overall, The Secret Life of Pets is beautiful but the lack of originality and development is its downfall.

The Secret Life of Pets is out in UK cinemas on Friday 24th June.