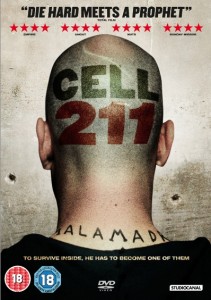 Juan Oliver is knocked unconscious during the prison tour on the day before he begins his new job as prison officer. He is rushed to the empty cell 211 and left to come around. Meanwhile, inmates of the high security wing break free and riots break out. When he awakes he realises he’s trapped and has to pretend to be a new prisoner in order to survive…

Engaging and intense, Daniel Monzón’s gripping prison drama Cell 211, swept the board at the Goya Awards winning 8 awards including Best Film, Best Director and Best Actor. Paul Haggis (Crash) has already been asked to write the US remake and is rumoured to direct the project.

We have three DVDs of the film to giveaway, to be in with a chance of winning simply answer the following question…

Competition Rules:
* The winners will be picked at random and contacted by Flickfeast.
* The Editor’s decision is final and binding on the entrants. No correspondence will be entered into.
* Closing date is 31st January 2011. The winners will be notified by email and must confirm and claim the prize within a week otherwise the prize will be redrawn.
* The prizes can take up to 3 months to be delivered
* You must be registered on the site to enter so if you’re not already please register (it’s free)