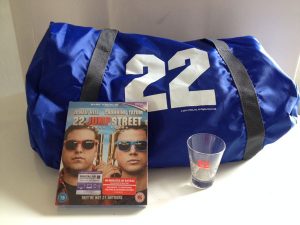 Jonah Hill (Moneyball) and Channing Tatum (Foxcatcher) are back in action in Columbia Pictures’ / Metro-Goldwyn-Mayer Pictures’ outrageously explosive 22 JUMP STREET, debuting on Digital HD on November 3rd, and on Blu-ray™ and DVD November 17th from Sony Pictures Home Entertainment.  After making their way through high school (twice), big changes are in store for officers Schmidt (Hill) and Jenko (Tatum) when they go deep undercover at a local college. But when Jenko meets a kindred spirit on the football team, and Schmidt infiltrates the bohemian art major scene, they begin to question their partnership.  Now they don’t just have to crack the case – they have to figure out if they can have a mature relationship. If these two overgrown adolescents can grow from freshmen to real men, college might be the best thing that ever happened to them.

22 Jump Street is available on Blu-ray, digital download and DVD now. To be in with a chance of winning a fabulous goody bag, containing a 22 Jump Street Blu-ray, barrel bag and shoot glass, simply answer the following question…

Competition Rules:
* flickfeast is the promoter of the competition
* Competition is open to UK residents only
* The winner will be picked at random from entrants who have correctly answered the question.
* The Editor’s decision is final and binding on the entrants. No correspondence will be entered into.
* Closing date is 25th December 2014. The winner will be notified by email and must respond within a week otherwise they forfeit the prize.
* flickfeast reserve the right to award a different prize of equal value
* You must be registered on the site to enter so if you’re not already please register (it’s free)