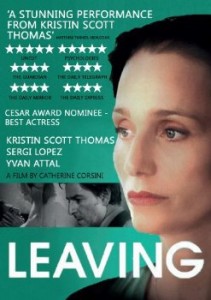 LEAVING IS OUT ON DVD FOLLOWING ITS CRITICALLY ACCLAIMED CINEMA RUN:

“A masterpiece… I cannot remember the last time I was so deeply affected in the cinema” – Henry Porter, The Observer
“A stunning performance from Kristin Scott Thomas” – Matthew Turner, View.co.uk

Kristin Scott Thomas brings another extraordinary performance to the screen, with a role that has already earned her a nomination for France’s highest accolade for an actress – Best Actress at the Cesar Awards 2010. This is Kristin’s first French speaking lead role since I Loved You So Long, which garnered high critical praise and earned over one million pounds at the UK box office.

Suzanne (Scott Thomas) is married to Samuel (Yvan Attal) with two children. When she decides to go back to work as a physiotherapist, it brings her into contact with a builder called Ivan (Sergi Lopez), an odd job man who has been to prison. The mutual at¬traction is sudden and violent. As Suzanne spirals out of control, she must decide between her family or living this all-engulfing passion to the full.

A stunning portrait of the destructive consequences that love can have, Leaving is at once a blissful account of amour fou and a searing insight into the romantic soul, at the centre of which is a scintillating performance from Kristin Scott Thomas.

Courtesy of Metrodome we have 3 Leaving (reviewed here) DVDs to giveaway. Simply answer the following question…

Competition Rules: You must be 15 or over to enter. The competition closes on 29th November 2010 and you must be registered on the site to enter so if you’re not already please register (it’s free)!