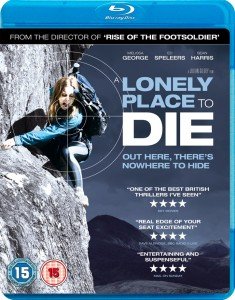 After closing Frightfest 2011 and enjoying a nationwide release, A Lonely Place to Die comes to DVD & Blu-ray 26 December with a whole host of extras.

Starring Melissa George (Triangle, 30 Days of Night) and directed by Julian Gilbey (Rise of the Footsoldier) the film centres around a group of five mountaineers who are climbing in the remote Scottish Highlands when they make a horrific discovery: a young girl buried in a small chamber, with only a small air pipe to the surface keeping her alive.

She is terrified, dehydrated and half-starved.  Deciding they must get her to safety, the group embark on a dangerous and nerve-racking descent.

Unwittingly, they’ve taken charge of a valuable bounty and are being hunted down by the girl’s ruthless kidnappers, who have everything at stake and nothing to lose.  Caught up in a terrifying game of cat and mouse, they are in mortal danger and there’s no easy way out.

Described by Total Film as hitting “like a bullet between the eyes”, this is the ultimate uncompromising and brutally realistic pursuit thriller.

A Lonely Place to Die is out on DVD and blu-ray 26th December 2011. Courtesy of Kaleidoscope Home Entertainment we have three of these fantastic blu-rays to giveaway. All you have to do is show us a little love and ‘like’ us on our facebook page. Those that have already kindly ‘liked’ us on facebook will be entered into the draw automatically.