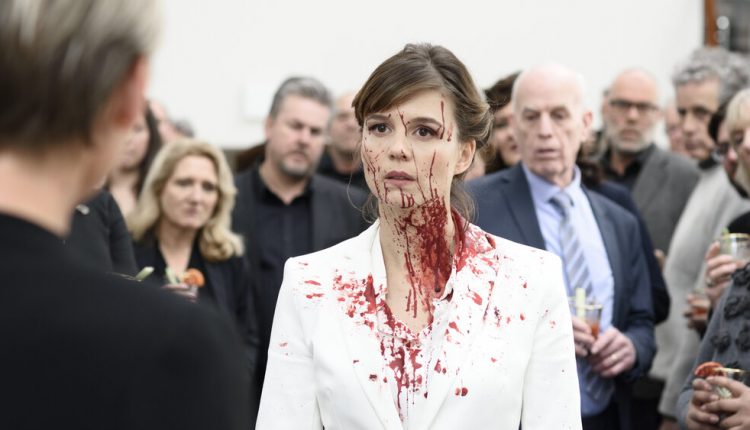 Some films speak so pointedly to the period in which they’re made, that you couldn’t see them coming about at any other time. Take the new horror / drama from the Netherlands The Columnist, which manipulates the horrors surrounding the phenomena of our age – social media – to show how easily it can distort truth, and lies, to wreak havoc on the lives of innocent people.

Femke Boot (Katja Herbers) is a writer with a problem. Not only has she a deadline for her debut novel and a severe case of writer’s block, but she is also dealing several anonymous internet trolls intent on spreading malicious rumours about her which could destroy her fledgling career before it even starts. Having been pushed to breaking point and unable to concentrate on her work because of distractions from an obnoxious neighbour, Femke sets out to track down her invisible tormentors and prove to them that there is a real person being affected by their mindless games, a person who wants revenge.

Horror with a social message, something which we can all relate to, is always more effective than that of some mad man wielding an axe, or a mutant invasion from outer space. And what could be more relatable than the horrors surrounding the use, and misuse, of social media. Many believe it’s ok to destroy people from the safety of a computer keyboard in their bedroom or the privacy of their mobile phone. However as the those who cross Femke – the writer, in director Ivo van Aart’s pithy horror / drama, who’s life is destroyed by online abuse – are made to remember to their cost, victims of cyberbullying have lives as well, and it is not necessarily fair to make them pay for a mistake they made in the past.

The real beauty of van Aart’s film, and what keeps you transfixed for its eighty odd minutes, is its depiction of Femke’s disintegration. From an innocent writer struggling to satisfy a publisher from hell, pressurising her for daily updates on the progress of her unfinished manuscript, to a woman pushed to gruesome extremes by the challenges of both everyday life and those of the internet age, the film is a wonderfully effective depiction of both psychological and physical horror. It is also an unnerving portrayal of the destruction inflicted by people’s obsession with celebrity, and the glee they often take in destroying those in the public eye.

Many of the film’s supporting cast make little more than fleeting appearances, meaning the majority of screen time is given over to Herbers. A liberty which allows her to bring depth to the character of Femke, in turn enhancing the viewer’s sympathy for a character who might, in reality, be considered as perverse as those who torment her. The film is also beautifully shot, the simplicity of its clean, pale palette, emphasising the often graphic depiction of Femke’s disposal of her victims. Which are what lifts the film from being just another thought provoking social drama, to an edgy urban horror, that’s bolt from the blue murders are all the more disturbing because of the clinical and icy way in which Femke executes them. All of which climax in a beautifully austere setting where dark gore and pristine pastels juxtapose to startling effect.

As said, many films speak to the period in which they are made. The Columnist adds to this by putting at its core a subject which, like it to not, will be with us in some form from now on. Let’s just hope we can curb its more extreme examples before it’s too late.