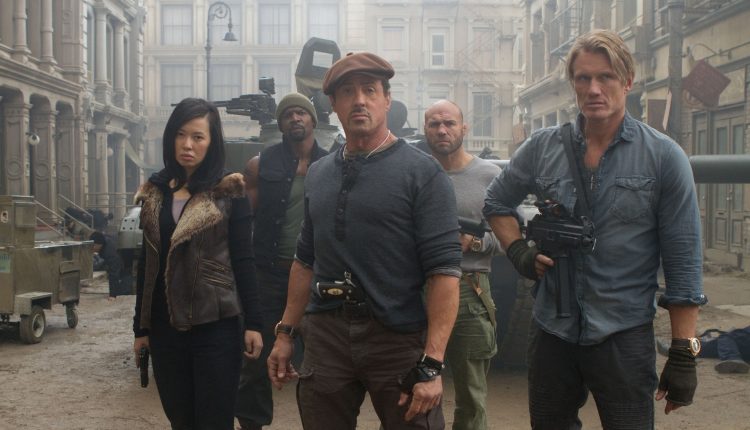 The Expendables was great fun. It was a joke, of course, but it was a joke that I, and all of the other action fans of my generation, thoroughly enjoyed. And the cast all seemed to enjoy it. More importantly, they were all in on it. It wasn’t exactly subtle but it wasn’t overdone to the point of being annoying either. I was as excited as many other fans when the sequel was quickly greenlit and I was even more excited to hear that even more big names were being added to the cast, the inclusion of Chuck Norris and Jean-Claude Van Damme, the latter in a villainous role. Indeed, I was more than willing to revisit the well and drink the Kool-Aid.

Within the first ten minutes it’s easy to see that this entire sequel is wrong on almost every level. The tone is wrong, the action isn’t that impressive and, perhaps most importantly of all, it becomes clear that the joke should have only been stretched for one movie. Building up the roster of names and giving more screentime to icons like Arnold Schwarzenegger and Bruce Willis just highlights how groansome and downright mutually masturbatory the whole thing is.

You want to know the story? Well, despite how lazy the whole exercise is I suppose I should try to offer a pointless summary. Sylvester Stallone returns as Barney Ross and he’s still got his team of asskickers (Jason Statham, Terry Crews, Randy Couture, Jet Li, Dolph Lundgren and the newly inducted Liam Hemsworth) to help him on a number of missions. He’s also still being given jobs by Bruce Willis and spending some time with Ah-nuld. The main mission on this occasion involves taking a woman (Nan Yu) along to crack a hi-tech safe and get the contents. That would be fine if it wasn’t for the fly in the ointment, the villain played by Jean-Claude Van Damme who, in a way that just exemplifies the laziness of the project, is actually named Vilain.

Written, once again, by Stallone (with Richard Wenk helping out this time) and directed by Simon West, this could have been even better than the first film. It could have been the action fan’s wet dream that the first one was. That’s what makes the end result all the more disappointing. The writing is way below par and the action scenes are, for the most part, pretty unexciting. Be sure to enjoy the first 13 minutes because they’re the best in the entire movie (well, aside from the moment that has Chuck Norris relating a “Chuck Norris Fact”).

The cast all do what they do, there aren’t really any complaints to be made there, but when there’s a chance to ham it up they definitely take it. The old hands are the worst offenders. With so many ways to reference past glories they are just given the sloppiest, easiest option and go along with it. Like the moment when Arnie is given a gun from Terry Crews and is told: “If I don’t get this back, your ass is terminated.” Or the moment when Arnold says that he’ll be back and is told by Willis: “You’ve been back enough. I’ll be back”. What is the witty response to this? Arnold gets to utter “yippe-ki-yay”. If you’re cringing just reading about it imagine how you’ll feel while watching/hearing it.

There’s fun to be had here, intermittently, but the tone, the script, the editing and the performances from the bigger action icons onscreen make the first movie seem like a masterpiece. And that just isn’t right.

The Expendables 2 muscles its way on to DVD and Bluray on Monday 10th December, with a number of special features including a decent, if a bit too self-congratulatory, commentary from director Simon West, featurettes on the weaponry used (approx 13 mins) and getting the cast and crew in place for the sequel (approx 20 mins), a few deleted scenes and a gag reel that doesn’t raise many laughs. The commentary is the best of the bunch but the other material should please fans of those involved.