The inhabitants of a remote Scottish fishing village know to fear the sea. It can snatch people away in the blink of an eye, swallowing up ships into its deep blue belly. Such is the fear of the one thing that sustains them all that when young Aaron is picked up as the only survivor of a crew of six, they turn on him blaming him for bringing a curse down on them. But for all the undeniable power of the ocean, it’s the behaviour of the villagers and the malicious way in which they treat Aaron that strikes the deepest note of terror in Paul Wright’s affecting debut.

Wright opens with Aaron’s (George MacKay) return. He’s the only one found, floating bloody and battered with no apparent memory of events. The other five, including his older brother, are given up for dead. Always a slightly odd child, he finds himself shunned by all but his mother (Kate Dickie) and his brother’s girlfriend (Nichola Burley). As hostility towards him increases, his mental state deteriorates correspondingly until he becomes focussed on an old bedtime story about a giant fish that drives a return to the sea to search for his brother. 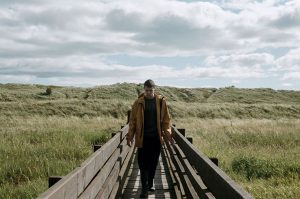 Wright drip feeds flashback scenes from the start, gradually building an increasingly sad picture of Aaron’s life and the way he has been treated by all those around him. This is set against a fascinating descent into post traumatic stress as he struggles to deal with the loss of an idealised brother who was not all that he made him out to be. As the conviction that his brother might still be out there somewhere continues to build, there is a hint of Jeff Nichol’s Take Shelter as Aaron removes himself further and further from the only community he’s ever known, dedicating his efforts to building a raft to go and search himself.

Having already assembled an impressive back catalogue of performances considering his age, MacKay is astonishingly accomplished in the lead role. The terrified anguish of a young man unable to control his own spiralling thoughts radiates out of his every action. When he approaches tipping point, he elicits an appalling mix of horror, fear and sympathy. Dickie is also impressive as the mother struggling to deal with the physical loss of one son and the mental loss of the other.

The real star though is Paul Wright. At ease playing with a number of different forms including voiceovers and found footage that give off a documentary feel at times, and comfortable switching between intimate living room drama and silent outdoor exploration, he puts down a strong marker. Sometimes he throws too much at a film that can be a little rough and ready, loosening focus, but it’s a highly impressive debut.

For Those in Peril perfectly captures the insular barbarity of a community that lives in fear of the one thing it needs to survive. After narrowly avoiding death, all Aaron gets are chants of Jonah as he walks past, the locals blaming him for the other five simply because he’s still alive. Wright conjures up a stunning note to leave on, a moment of beautiful ambiguity left open to interpretation. By the end, the majesty of the sea remains intact, as does the monstrosity of the people.

For Those in Peril’s DVD release includes Paul Wright’s 2009 short Believe and the theatrical trailer.