“What is worse than a spider in your house? A spider as big as your house!”

That sentence above, that’s a tagline included in the press blurb that came with the screener disc of Spiders 3D (or, when watched in standard 2D, just Spiders).  That is the simple pleasure that the movie is aiming for, and that is, to a degree, what it delivers. 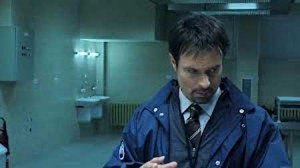 The story sees some space debris crashing down in New York city and causing no small amount of havoc for the public transport system. Patrick Muldoon plays a man trying to keep some public transport running smoothly, so he has one big headache as the situation unfolds. He’s also a bit on edge while dealing with his almost-ex-wife (Christa Campbell) and trying to spend some time with his daughter (Sydney Sweeney) on her 12th birthday. To make matters worse, debris wasn’t the only thing that crashed down from space. As the title suggests, some spiders are also about to cause problems. They’re deadly, they grow to be a lot bigger than the average spider and they’re out to catch as many people as possible in their webbing.

There’s domestic drama, there’s the strict army man (played by William Hope), there’s the scientist who may have good intentions but just makes everything worse (Pete Lee-Wilson) and everything gets bigger and bigger as events lead to the grand finale. If you created a checklist for this kind of film, Spiders ticks all the boxes. 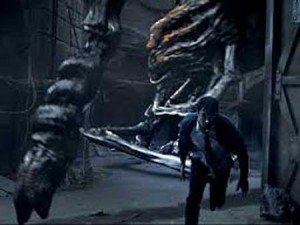 Directed by Tibor Takacs (the man who gave us the greatness of films such as The Gate and I, Madman before continuing his career with TV work and stuff like . . . . . . . . this), Spiders tries to make up for its many failings with energy and a sense of fun. The script, by Joseph Farrugia and Takacs, may be as weak as the acting, but at least there’s a spider to watch out for in almost every scene. And spiders crawling around can go a long way to make up for other shortcomings when the movie is named after them.

Muldoon is okay in the main role, I guess. He’s certainly better than Campbell (as much as I like her, she doesn’t do herself any favours here) and Hope. Pete Lee-Wilson isn’t great either, but his character allows for the kind of twitchy performance that can distract from the actual quality of the acting so he fares slightly better. And young Sweeney does as well as, or even better than, her elders. 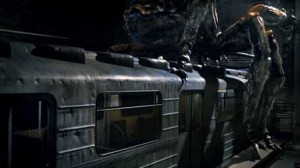 The special effects aren’t all that special. They vary wildly from scene to scene, with one or two good moments buried beneath a wealth of dross. Mind you, I wouldn’t have been bothered by the quality of the effects if the movie hadn’t gone on to make one major error it would then compound right up until the end credits rolled. This film, apparently, takes place in New York, but it’s a New York in which only about 100 people seem to live. Perhaps my imagination was being overactive, but I also continued to suspect that the scenes showing Muldoon and Campbell fleeing from giant spiders all took place within the same street/block set. An area that was simply shot from different angles, with little thought or care given to making the environments feel like any more than a film set.

Boaz Davidson helped to come up with the story idea for this one, and he was also responsible for Spiders (2000) and Spiders 2 (2001). They may have been much lesser movies, in terms of budgets and technology available, perhaps, but they still end up being just as daffy and entertaining as this movie. Considering this movie is coming along over a decade after those other movies were released, that serves to highlight just how disappointing the end result is.

Spiders 3D crawls onto DVD and 3D Blu-ray on 14th October here in the UK.