Set ten years after the events of Prometheus, the sixth entry in the Alien franchise (I refuse to count Alien vs Predator and AVP: Requiem) finds us on-board the Covenant on an intergalactic IVF mission. After a freak accident jolts the crew out of cryosleep, a signal from an inhabitable planet begs investigation. Thankfully, it’s a planet that doesn’t harbour a mutable weaponized pathogen. No, wait!

Acting captain Oram (Crudup) struggles to take control of the situation; Daniels (Waterson) is dependable but grieving the death of bae/her former captain, whilst Walter (Fassbender), the ship’s synthetic is part-protector, part-patroniser. Danny McBride’s pilot Tennesse (surprisingly) is the only other character to evoke empathy. Crew: expendable.

The action sequences prove that Director Ridley Scott’s clearly been drinking his LSV (-426). As is always effective with the franchise, the fray in Covenant is often confined, tight & scrappy which although familiar, is no less exhilarating. However, the encounters in the planet’s wide open feel fresh and fraught with agoraphobia, where the crew’s itchy trigger fingers only aid the alien. The moments of familiarity will no doubt make some mardy as it did with Star Wars: The Force Awakens. Just as the Star Wars universe has a penchant for baddies that wear black and planet-sized weapons with gaping engineering flaws, Covenant takes place in the Alien universe where eggs hatch, faces get hugged, and airlocks are key. There is enough variation in the births, deaths and funerals to shock both the purists and the casual fans. 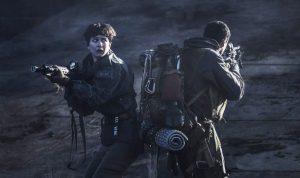 As is customary though, there are the common issues that plague franchises that I’ll christen Prequel Dysmorphia. The technology on the Covenant far upstages anything seen years later on either the Nostromo space truck in Alien or the USS Sulacco in Aliens. Although it is comforting to know that iPad knock-offs will still be a thing in the future. In a similar vein, the new alien Neomorph would be pacing ahead of the original Xenomorph on their own version of the Evolution of Man. Of course this is inevitable with advances in both filmmaking and film audiences, but it still doesn’t contribute to the suspense of disbelief.

Sadly, the third act adds to this with Daniels doing her best ‘”George of the Jungle” impression from the port of the in-flight jump ship. So impressive, they thought, that they’d try it twice. Shortly after, it’s discovered that Daniels would get her money’s worth on an arcade claw machine and the finale somehow manages to be simultaneously innovative and predictable. The eye rolls don’t detract from the stunning visual effects though. Scott’s simply showing off here; never more so than we see double as Walter learns to play the recorder, courtesy of an exceptional teacher. Ridley Scott also clearly has English Lit students in mind too, with a character poignantly quoting Ozymandias, yet attributing it to Byron as opposed to the Bysche. “A minus. See me!”

Talk of Alien: Covenant being perhaps the most ambitious sci-fi film may be off target but when the blood isn’t flowing, the mythology is growing. The former Star Beast’s history has effectively been rewritten here and steeped in a sense of irony, religious theology and causality. Whilst comic book fans’ chests will be bursting with anger and talk of retconning, Alien: Covenant is infinitely more satisfying than Prometheus as a result.

Is this the masterpiece that fans craved? No. But it’s mostly the best Alien film since Aliens. Mostly.

This is Robb Sheppard, signing off.