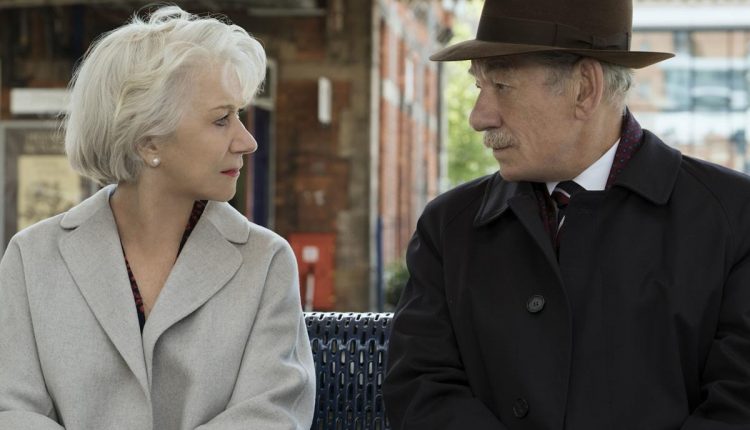 Who says that firepower at the box office is only ignited when dynamic faces under age forty are solely featured? The onscreen pairing of radiant Oscar-winning actress Helen Mirren and the distinguished Ian McKellen will beg to differ as their veteran star power brings a whole new energy to director Bill Condon’s sophisticated con game drama The Good Liar. It is a rare treat to see this seasoned tandem share the screen so compellingly in a tale of mature deception and disillusionment. Smooth, calculating and involving, Mirren and McKellen seek the absolute truth of twists and trickery in The Good Liar.

Condon, who has dabbled in various genre films ranging from musicals (“Chicago”, “Dreamgirls”), biopics (“Kinsey”), Young Adult fare (“The Twilight Saga: Breaking Dawn parts 1 and 2”) and everything else in between, teams up with screenwriter Jeffrey Hatcher (“Mr. Holmes”, “The Duchess”) to serve up a succulent melodrama allowing the incomparable Mirren and MCKellen to match wits in an exposition of undercurrent deceit.

Based on Nicholas Searle’s 2016 novel, The Good Liar presents the dashing yet aging British senior Roy Courtney (McKellan) reeling in the lovely widowed Betty McLeish (Mirren) via an online dating website. Both old souls are infectious in their spirits. Roy is charming but physically gimpy courtesy of his aching limbs. As for Betty, she is an older beauty with a sunshine smile. Together, this dating duo seem to be unstoppable in the charisma department.

However huggable and humble that Roy may appear in the affectionate eyes of his companion Betty, he is hiding a secret about his real deal as an experienced con man out to make a big score. In this case, Roy yearns to get hold of Betty’s generous fortune by any means necessary. How can Roy be so despicable based on his sordid motives? Even Roy’s close associate Vincent (Jim Carter) is in disbelief by his partner’s steel-minded nerve to demonstrate greed at the expense of an unassuming Betty. To label Roy an unredeeming scammer would be an understatement.

Roy is not the only one guilty of telling and/or demonstrating a whopper of a lie either. Remember, both individuals met at a restaurant under a total different name while guarding their identities. Perhaps this was both acceptable and understandable given the unknown factor of each person? For instance, Betty expressed being a non-drinker according to her profile but sits there nursing an alcoholic beverage. So both are capable of relying on the standby falsehood. The question remains: which major fib would have the most impact on the individual in question?

In any event, old-timer swindler Roy has his designs on Betty’s money as he tries to convince his refined galpal Betty to transfer her wealthy funds into his bank account for an investment he promises would benefit them. Meanwhile, standing on the sidelines while carrying all sorts of suspicion about Roy is Betty’s grandson Steven (Russell Tovey). From the very beginning Steven has not been won over by Roy romancing his vivacious grandmother. His reservations concerning Roy are persistent and Steven will stop it at nothing to find out about the knee-limping charmer wanting to get at more than Betty’s loving heart.

Interestingly, the audience starts to get some subtle hints concerning Betty’s questionable backstory. She is not exactly what one would call an innocent lamb–only when we are reminded that Roy is about to take her to scam school. Sure, Betty needs to be careful of her elder playboy but then again…does Roy have anything to worry about in term of Betty’s possible hidden shenanigans?

Consequently, The Good Liar is a resourceful tease that tactfully maneuvers artfully while keeping the movie-goers second guessing at every frame. Condon’s lonely hearts club thriller for the older crowd is thoroughly bouncy and has an effective vibe courtesy of the mysterious steps taken by both Mirren’s and McKellen’s engaging presence behind their shifty alter egos. Although the slick diversions are properly executed yet veer off from time to time, the cat-and-mouse exchange between these two remarkable on-screen British vets never lacks as far as the suggested tensions are concerned. McKellen is having a ball portraying the wrinkled bad boy disciplined in his ill-advised craft. Mirren is hypnotic and makes for a seductive target to be fooled…or to do the fooling.

The Good Liar has more considerable twisting and saltiness than a profitable pretzel factory. Condon’s fool-me-once, fool-me-twice con caper may not be a polished gem beyond other films catering to this ubiquitous genre. Still, it has delightful sass thanks to the established giddiness of its notable leads in on the wavering hustle.

Scandalous: The Untold Story of the National Enquirer (2019) Film Review