Prepare for a heart-stopping experience as Darren Aronofsky presents the psychological thriller, mother!

To celebrate the release of mother!, available now on Digital and coming to DVD, Blu-ray ™ and 4K Ultra HD™ on January 22, we are giving you the chance to win a copy on DVD! 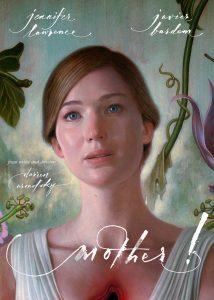 A couple’s relationship is tested when uninvited guests arrive at their home, disrupting their tranquil existence.

For your chance to win a copy of mother! on DVD simply submit your answer via Twitter, Facebook or in the comments below. Winners will be announced on Monday 22th 0f January. Good luck! :

In the trailer, the character played by Ed Harris can be heard asking for a room in the house belonging to the characters played by Javier Bardem and Jennifer Lawrence, believing it to be what?

b) A bed and breakfast

The Hobbit to be a trilogy