STUDIOCANAL is pleased to announce that from cinematic master Terrence Malick (The Tree of Life, To The Wonder), comes SONG TO SONG – a story of a lyrical love triangle – that will be available on DVD and Digital Download from 25th September 2017. To celebrate, we’re giving away a DVD to two lucky winners! 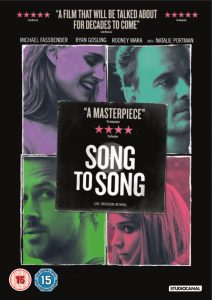 With cameos from music scene stars including Florence Welch, Iggy Pop and The Red Hot Chilli Peppers and a soundtrack including Bob Dylan and Patti Smith, SONG TO SONG a vibrant and alluring exploration into music, love and the turbulent Texan rock and roll scene.

Check out this clip taken from the Featurette that appears on the DVD extras: