Seth Rogen, Jay Baruchel, James Franco, Craig Robinson, Jonah Hill and Danny McBride all have fun playing movie versions of themselves in this comedy that takes place during the apocalypse. There’s death and destruction outside their haven – James Franco’s house – but indoors it’s pretty much business as usual, with arguments, drug use, more arguments and plenty of one-liners. 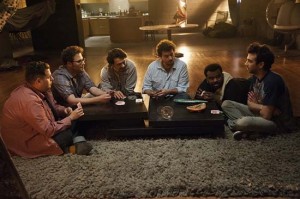 Directed, and written, by Evan Goldberg and Seth Rogen (based on solid groundwork laid by Jason Stone), This Is The End is a movie that I wanted to really enjoy. I like most of the cast and the premise was fantastic, despite it all coming together just in time for everyone to confuse it with the superior The World’s End. And, to be fair, the two movies are very different in many ways, despite the core premise seeming almost identical to outside observers.

As I can say about most movies starring these guys together, if you’re not a fan then this isn’t going to convert you. They all have their own style, for better or worse, and they stick within that comfort zone, most of the time. The fact that this movie pokes fun at each established persona is one of the better aspects, but it’s probably still not sharp or brutal enough to appeal to non-fans. 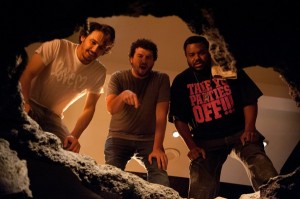 What may appeal to casual viewers is the wealth of fun cameos, most of them packed into the opening 15-20 minutes of the movie. Emma Watson, Michael Cera, Mindy Kaling, Christopher Mintz-Plasse, Rihanna, Kevin Hart, Aziz Ansari and quite a few others put in an appearance, with Cera and Watson almost taking the prize for best cameo performances before being pipped at the post by a surprise reveal in the finale that impressed me almost as much as THAT superb cameo in Zombieland. 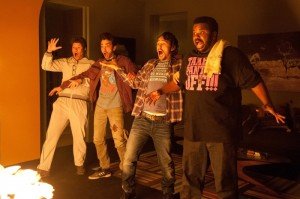 This Is The End has some big laughs. It does particularly well when it fully embraces the apocalyptic premise, instead of using it as just a reason to keep all of the stars together in one location where they can bicker and fall out with each other.  There’s  a great moment that riffs on The Exorcist, a moment that will make horror fans wish that the movie had aimed for a finer blend of genres instead of aiming for comedy with a little bit of darkness here and there. Rare excursions out of the house dip, inevitably, into horror territory and those sequences help the pacing, and add a little bit of tension as big, unspeakable horrors are hinted at. 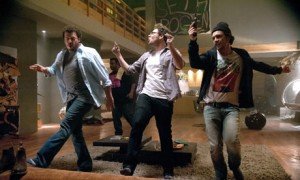