Portrait of the artist as a tortured soul? That would be an apt description of Calvet, a documentary that gets you interested from the very beginning and holds your attention throughout while taking a number of unexpected, and at times tense, twists and turns.

Jean Marc Calvet is an extraordinarily talented artist. His work is vibrant, detailed, partly childish, partly tribal and infused with every experience that he has endured throughout his life. This documentary covers a lot of those experiences, told by the man himself, and benefits from both an intriguing life story and a central figure who forces himself to pick at old emotional wounds while never sounding flippant or remotely proud of a turbulent, violent past that at least led to him becoming the man and artist (surprising himself as well as anybody else who knew him years ago) he is today. 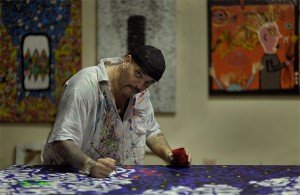 Directed by Dominic Allan, Calvet will appeal to art lovers  but certainly also covers the darker, sadder aspects of human nature that all but the most sheltered individual can at least tentatively relate to. As the man discusses his youth and his many, MANY mistakes in his life he never makes excuses and seems to be at peace only through the fact that he’s finally faced his demons and taken full responsibility for his actions. He abandoned a son he regrets leaving and was on the very edge of the grim reaper’s cloak at one point.

As I’ve said on numerous occasions, great documentaries need that convergence of great subject matter and one great moment and Calvet has both. I won’t spoil the film for anyone by going in to detail but this viewer, for one, was alternating between astonishment and genuine tension for most of the runtime. By the time the closing credits came on I was making sure that I had dry eyes before leaving the cinema (I think some dust was in the air or some other reasonable excuse *ahem*).

Others may not relate quite so well to this man’s incredible journey but this certainly struck a chord with me (as did The Kid at last year’s EIFF) and so the documentary was also elevated in my view by what I took into the screening with me.

As any great documentary should do, Calvet reveals plenty about its central subject and yet also leaves you wanting to find out more. It’s all about art insomuch as we all have our own canvas that we can repaint as many times as we like. And yes, I’ve already been browsing for an affordable piece of the artist’s work. 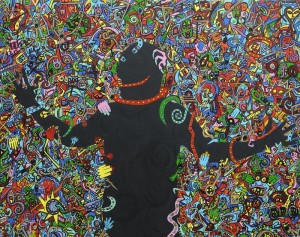 Those who have had their interest piqued may want to check out my interview with Dominic Allan here.