Thomas Jane plays Peter Roberts, a former race car driver who is now trying to make a living as a driving instructor, in this amusing action comedy. John Cusack is Simon Keller, a man who wants a refresher lesson. It’s not long, however, until the truth comes out. Keller is about to rob a bank, and that’s why he wants the driving skills of Roberts. A chase and lots of bickering ensues, with Roberts soon finding out that Keller may be a criminal, but he’s a man of his word.

Quite a strange beast, Drive Hard is knockabout fun that feels like a great concept slightly undone by the execution. It’s a “buddy” movie with the two buddies being a hostage taker and the hostage. Although there are other people onscreen, including Zoe Ventoura, Damien Garvey, Christopher Morris and Jesse Spence, this is a two-hander that focuses on Jane and Cusack, with the two men certainly doing their bit to raise the whole film. They play off each other well, with Jane being a bit of a weak sap who develops more backbone as the movie progresses and Cusack being cool, calm and collected throughout. 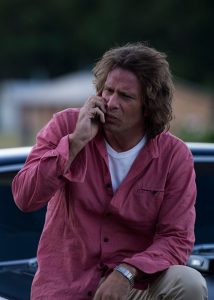 I, along with many others, will always have a soft spot for anything from director Brian Trenchard-Smith. From Turkey Shoot to BMX Bandits to Night Of The Demons 2 to, well, a couple of sequels in that damn Leprechaun franchise, the man is no stranger to genre fans. A lot of his movies aim for one thing, to provide viewers with a slice of fun, and many of them achieve that aim. While Drive Hard suffers at times from a number of short-cuts that seem to have been made to stretch the budget further, it rattles along at a good pace, has a couple of decent action moments and often makes you smile.

The big downside is that there isn’t really a sense of exhilarating speed, which is something kind of essential for a movie selling itself as a driving action movie. There are also a couple of set-ups for big action moments that then just fizzle out to nothing, sadly. But, when all is said and done, I laughed a lot at Jane being set upon by a tough old woman, I enjoyed all of the dialogue between the two leading men, and some of the driving was pretty nifty. The emphasis may be on the comedy more than the action, but that’s fine.

A perfect rental choice, and maybe worth a purchase if you can get it at the right price, Drive Hard doesn’t pretend to be anything it’s not. It can’t compete with other movies in a similiar vein, such as Drive Angry or those The Fast & The Furious films, but it doesn’t try to. It simply gets from A to B at a decent speed, dropping passengers off at the end without too much discomfort caused.

Drive Hard screeches into stores near you on 26th May.