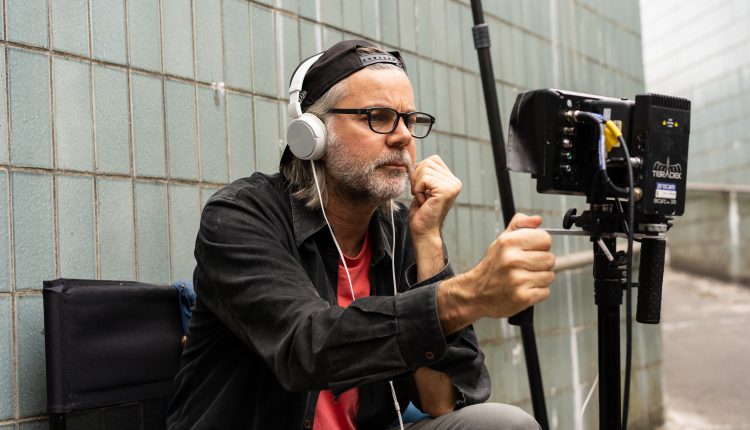 In How to Stop a Recurring Dream, teenager Yakira kidnaps her sister during a family separation. The film explores feelings of desperation, anxiety and alienation, showing what happens when you’re pushed to the edge.

In this interview we talk to director Ed Morris who explains the tragic real-life circumstances that inspired the film, how he avoided inverted racism in his casting and the importance of showcasing young, emerging talent.

FLICKFEAST: How to Stop a Recurring Dream is great, what inspired the story? It’s unique in terms of its focus on adopted children and it’s quite a feminine film. As a male director, I wondered what drew you to it?

ED: It is a feminine film and I am conscious of having a thread of the female hero journey through my work. I lost my wife 10 years ago and I was left with 2 children; 1 of whom was from her first marriage: my daughter – who lived with me for 13 years – she calls me dad and we’re tight as anything. And my son, who my wife and I had. It was my wife’s dying wish that they’d not be parted. When my wife passed away, I had to ask, “What the hell do I tell them?” This film, in some way, is an answer to that question.

Another story that triggered the beginning of the writing was a story that was in the press 7 years ago. A woman had gone to court to fight for custody of her son and she’d lost the case. But instead of handing him over, she took him in the car and drove off with him. It was technically criminal, but she just wanted to spend some time with him and resolve issues between them. I thought that story was astonishing and could be a very clear timeline for the narrative, but I decided to focus on 2 sisters.

Most stories are about men and the hero’s journey, but there’s a great book by Maureen Murdoch called The Heroine’s Journey. From an analytical, Jungian and anthropological perspective she’s started to map out the heroine’s journey. In this female version, the goal is to return to the mother; usually within herself. So the ultimate destination for the film was going to be that.

“People of all types – minorities, people with disabilities – should be in films, but incidentally. That is something I quietly champion in the background and something I consciously thought through.”

F: As well as complex familial relationships, How to Stop a Recurring Dream touches on anxiety. This is something that is quite prevalent in society at the moment, so did you think it was important to explore this?

E: Anxiety and freedom are 2 big subjects. It’s an interesting [film] to fit into the current moment and maybe it does feed well into it. I think there have been tough times for people who are alone, but perhaps tougher times for people who are stuck together. What I was aware of with Yakira and that notion of family issues, is that usually one family member becomes a symptom of the illness. What happens when someone is suffering from anxiety or depression is they want to extract them from the family unit. Yakira becomes the symptom, she’s the one that’s not being heard. So she snaps and kidnaps her sister and goes off in the dad’s prized, classic car. I’m always fascinated by what people do when they don’t know what to do next.

F: What Yakira does seems extreme and you think you’d never do that, but you don’t know how you’ll act in those circumstances.

E: Yeah, exactly. I cast Ruby Barker because she’s been through a lot herself and she’s a method actor. The first act of the film is a series of rejections for Yakira, she bounces from one to the other. She feels like she’s got nowhere to go.

Also, her being a person of colour in a white family is an interesting thing as well. It’s not a story about that, but it further accentuates her alienation and it’s poignant. I liked the idea of coming up with a legitimate reason for a person of colour to be central to it.

F: I found it very refreshing that you did that, because it felt natural and that’s important.

E: Totally important.I used to work in advertising so constantly sat in rooms with white people casting black people to be virtue signalling to their white audience. You see that a lot in films and it becomes a sort of inverted racism. People of all types – minorities, people with disabilities – should be in films, but incidentally. That is something I quietly champion in the background and something I consciously thought through.

F: Did you consider waiting for the pandemic to be over before releasing the film or did you think it was important for it to be seen now?

E: It was strange one because in the week I had the film done, we go into a lockdown. I am going to market with a film and the cinemas are closed. Traditionally, you must secure a theatrical deal to release a film, but now the world has changed very dramatically. There have been a lot of minuses, but there have been more positives. We were on the festival circuit and I couldn’t travel to every festival we were at, because I’m a single working dad. So, it was quite handy when the festivals moved online *laughs*.

I could have waited, but you could wait forever. Because there was no studio involved, it was our film and we could do what we want with it. We shot this film 2-3 years ago and we spent a year editing. I don’t think there’d be that attention to detail if there was the pressure of a studio timeline on us. By the time it was finished, we just had to get it out.

“I always think it’s silly when you see a little movie and there’s a cameo by a huge star because the director or producer knew somebody. It’s distracting and it breaks the bubble.”

F: Do you think audiences will accept film releases to be mostly digital-focused? Or do you think having cinema taken away from them will encourage them to go back more?

E: Hopefully a bit of both. People’s exploration of film online seems to be growing. You can go onto a whole outlet of places and find great stuff you might not bother to go to the cinema and see otherwise. Cinemas have largely survived off 4 or 5 big blockbusters a year and if they sell enough popcorn it keeps them going. I would love to see a burgeoning of the smaller independent cinemas. Something I found being on the indie festival circuit was that there are so many great young people making so much great stuff, but there isn’t a real theatrical showcase for that.

F: Thinking about great young people, what was it like working with Ruby Barker – who’s now starred in Bridgerton – and Lily-Rose Aslandogdu?

E: It’s interesting seeing Ruby’s path, because she came to me and she really wanted the job and she was brilliant in the casting. There were 3 or 4 girls in the final run-up and they had more experience, but for me, Ruby had what it takes. I liked that I was using the film for young, emerging talent. I always think it’s silly when you see a little movie and there’s a cameo by a huge star because the director or producer knew somebody. It’s distracting and it breaks the bubble.

They were both great to work with. Ruby is a method actor so she draws on a lot and you have to let her get on with it. You have to be careful with her on set, because she comes to the scene in character. If that character is annoyed, she’ll be fucking annoyed! *laughs* I remember when she got really stroppy with me and I pulled her aside to ask her if everything was OK and she looked at me and said, “Ed, I’m in character.” And I was like, “OK then, I’ll keep away!” Every time we shot something she was very good.

Lily was great too. She has more experience than Ruby, she’s got some great credits to her CV. She was a joy to work with, it was absolutely effortless. The minute you said “action!” she was right there and you wouldn’t need a second take on Lily for anything.

E: I’m writing a lot of the time. How To Stop a Recurring Dream was a 5 year journey, but only 15 days was spent shooting. So, you don’t spend a lot of time directing, you spend most of the time thinking and wondering where you’re going to get the money from and how you’re going to sell it. I’m writing a couple of things, but I think there is a natural sequel to How to Stop a Recurring Dream. But, we’ll see how this does. It seems to be picking up a lot of momentum already. XL records are launching the music on 9th March and a video for their track is all cut from the film. There’s a lot of stuff going on, but where next? I’ll be sitting at home and writing.

How to Stop a Recurring Dream is out now to stream on Amazon, Google Play, Apple TV, Microsoft TV and Virgin On Demand. Check out our review here.