Zombie Hunter starts off well, and it’s certainly not a BAD film, but it quickly falls into that trap that a number of independent movies have fallen into throughout the past couple of decades. It just tries too hard to be hip and cool, despite the fact that it’s not as good as so many other, better efforts.

Martin Copping is, sort of, the zombie hunter of the title. He’s a man of few words, happier to let his weaponry and aggression do the talking. When he bumps into a group of people who have been surviving during these dark times of the zombie uprising (the whole thing seems to have been started by some dodgy drugs, as we learn at the very start of the movie) then it’s time for that well-worn story development – the hardass loner who finds himself reluctantly attached to a group of people who may just remind him of the benefits of companionship and the importance of humanity.

Zombie Hunter rattles along at a decent pace, has plenty of dry humour that works and a central performance from Copping that borders on a hilarious parody of The Man With No Name. It’s good fun. The supporting cast includes Danny Trejo, in a small, but fun, role, and some other people that I’d never heard of before. Clare Niederpruem is sweet and lovely as Alison, Jade Reiger provides some sizzle as Debbie (though this movie doesn’t ever go for the full exploitation angle, happy instead just to playfully tease in between the zombie moments), and Terry Guthrie, Jake Suazo and Jason K. Wixom are decent enough in their roles. 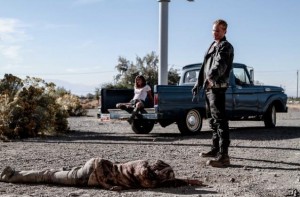 Director Kevin King AKA K. King (who also co-wrote the screenplay with Kurt Knight) does a very good job, especially considering the fact that this is his first feature. There’s nothing new here, but he just about manages to prevent it all feeling stale and tired. A lot of the effects are CGI, but the CGI is pretty good, considering the obvious low budget. It’s not blockbuster material, but it’s a far cry from a SyFy original. 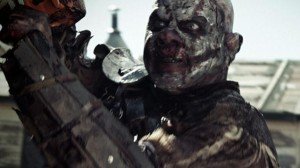 All in all, Zombie Hunter may not be worth your time in amongst the wealth of zombie movies that we’ve seen released in recent years. It isn’t a bad movie, as I’ve reiterated throughout this review. It just doesn’t bring anything new to an overcrowded table.